Like everyone else in the divergent timeline known as the Age of Apocalypse, the destiny of the man called Sabretooth was irrevocably altered when a young Charles Xavier was killed, thus giving rise to the dystopian rule of the mutant menace called Apocalypse. Though this version of Victor Creed shared the same past as his 616 counterpart up until this point, what came after varied dramatically.

Sabretooth’s dark and violent past presumably lead him to join Apocalypse’s Horseman. When Apocalypse finally executed his attack against mankind, he tasked Sabretooth with leading his Horseman to seize the nuclear warheads from Cape Citadel. However, when Victor learned 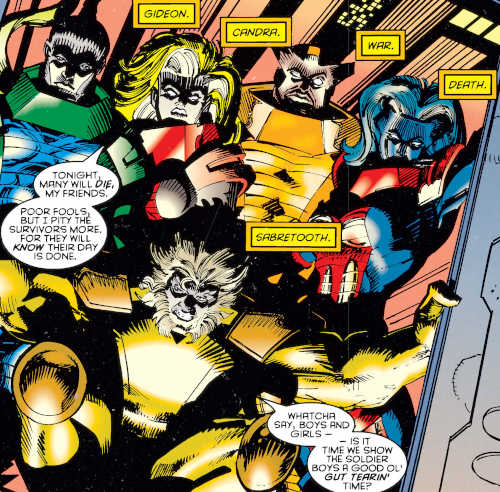 Apocalypse actually intended to launch the missiles, not just use them, he vocally opposed this. This opposition was for Apocalypse to cast him out for his weakness and order his execution.

When Magneto’s X-Men interrupted the Horsemen before the launch, the captive Sabretooth opted to fight alongside the Horsemen despite their betrayal. Creed faced off against Weapon X and fought the man furiously, though was defeated when the X-Man severed his spine and left him for dead. [X-Men Chronicles #1]

Despite his failure and his weakness, Sabretooth was allowed back into Apocalypse’s army, albeit with a demotion to the role of prelate, serving under the Horseman Holocaust. After helping his master perpetrate multiple atrocities, Victor grew to hate the killing. He finally broke down during the culling of Los Angles and attempted to hide a group of school children from being slaughtered. Unfortunately, he was found out by Holocaust, who brutally beat and humiliated the man before his army.

Whilst Holocaust could have killed him, he instead sent Sabretooth to prison and order him to be 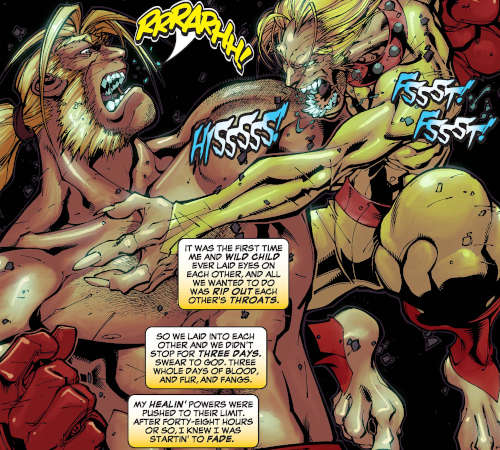 locked up with the feral mutant Wild Child, likely expecting him to be eaten. Creed and Wild Child fought furiously for three days straight but Creed eventually exerted his dominance over the other mutant. Having formed a master and pet bond that would last a lifetime, the pair were able to escape from prison by working together. [X-Men: Age of Apocalypse One Shot]

Eventually, Victor and Wild Child joined Magneto’s X-Men and actively participated rebellious missions against Apocalypse. During one mission to attack one of Apocalypse’s strongholds, Sabretooth could smell someone trapped within a transport at the burning base, and insisted they not leave anyone behind to die. Creed rescued a young girl named Clarice, and he quickly became a surrogate father her. [Astonishing X-Men (1st series) #3] 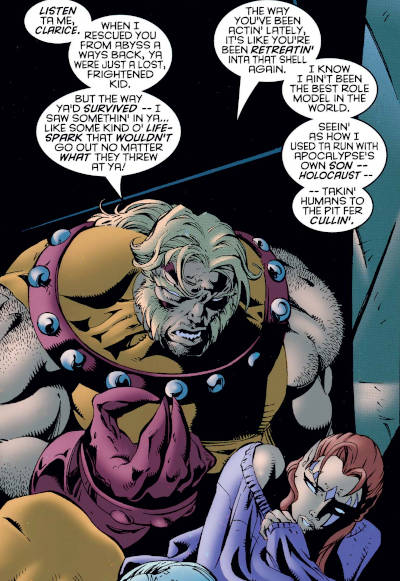 Sabretooth raised Clarice, teaching her to fight and survive with the X-Men. Eventually, though, Clarice became disheartened with their constant losses against Apocalypse and with each day retreated further and further back into her shell. Victor was never the best with emotions and struggled to reach out to Clarice and support her, which only made her worry that he hated her. When Clarice raised this concern with Blink, he vehemently told her it couldn’t be further from the truth. During a mission to the moon, Victor and his fellow X-Men were all captured by the Horseman Death, which forced Clarice to find her confidence and rescue her mentor and his teammates. Having earned herself a spot on the team as their newest member, Blink, Clarice and Victor moved past their personal issues and formed an unspoken bond. [Tales from the Age of Apocalypse #1]

Whilst Victor had formed strong bonds with Blink and Wild Child, he wasn’t an X-Man to make friends. He often butted heads with other strong-willed X-Men such as Weapon X or Gambit, but despite this he served on the team for many years, atoning for the sins of his past. Eventually, the team met the time-displaced Bishop. From him, they learned that their entire timeline was a mistake - Charles Xavier had died way before his time, and it should have been he who founded the X-Men. Magneto realized that the stranger was telling the truth and came up with a plan to restore the timeline to what it was supposed to be. [X-Men Alpha]

Magneto sent several allies out to retrieve the tools needed to reset the timeline, though he dedicated his own X-Men to aiding in the mass evacuation of humans from the East Coast. However, when Blink and Sunfire brought news of Holocaust’s mass culling of humans in Chicago, the team was torn between two missions. As a former participant in cullings, Victor felt very strongly about going to stop Holocaust, and would have left with or without the rest of the team. Together with Blink, Wild Child, Sunfire, Morph and Rogue, he travelled to Chicago to stop the culling.

Victor convinced a reluctant Blink that he needed to face down Holocaust himself, both to buy the 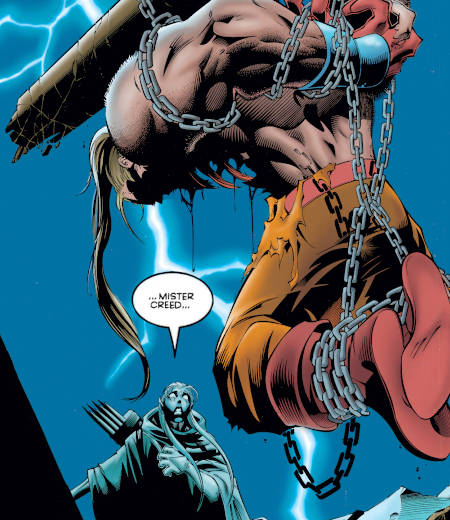 X-Men time and atone for his past sins. Together with Wild Child, Sabretooth faced down Holocaust and tricked him into revealing the location of the Infinite where the culling would take place. Whilst Wild Child fled to share this information with the X-Men, Victor battled Holocaust and, while he managed the crack the Horseman’s armor, Holocaust still beat Sabretooth within an inch of his life and left him for dead. Still, this bought enough time for Wild Child to get the location to the X-Men, who saved the human prisoners and briefly defeated Holocaust. [Astonishing X-Men (1st series) #1-4]

Fortunately, Victor was able to heal from his wounds and rejoin with his teammates. However, the team soon learned that Magneto, and his and Rogue’s son Charles, had been kidnapped by Apocalypse. Victor helped Rogue tracked her kidnapped son through the Morlock tunnels, while the rest of the team launched an assault on Apocalypse’s stronghold while also implementing their plan to reset the timeline. Ultimately, the X-Men were able to successfully send Bishop back in time to repair the timeline. In what was thought to be the last moments of the Age of Apocalypse, Sabretooth and Blink could only watch on helplessly as the Human High Council dropped nukes overhead in a last-ditch effort to destroy Apocalypse. [Amazing X-Men (1st series) #4, X-Men: Omega]

However, Sabretooth was plucked from reality seconds before its apparent destruction and found himself gathered with five other mutant killers from across the multiverse. The group were advised by a mysterious entity known at the Timebroker that they had become unhinged from time and were tasked with repairing damaged realities throughout the multiverse. Sabretooth was issued a Tallus, a device attached to his wrist that issued their instructions, which made him the de facto leader of the team. Due to many of them having links to the organization on their own worlds, the group chose the name Weapon X for their team. [Exiles (1st series) #13, 68]

After losing a few teammates on their first few missions, Victor and his remaining teammates were tasked with recruiting the Hulk to their fold. As he knew Alpha Flight and their mysterious allies, 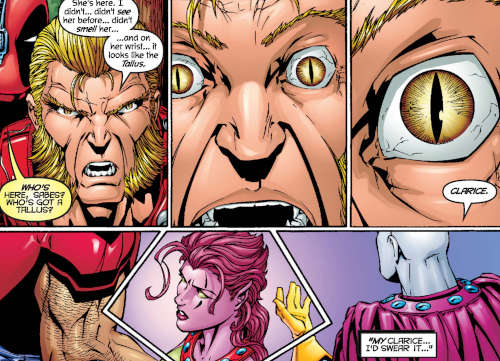 the Exiles, were planning to take down the rampaging Hulk, Sabretooth was content to sit back and watch while they fought each other. However, Victor was shocked to learn that his surrogate daughter Blink was actually a member of the Exiles, and they too were reality travelers like Weapon X. Victor watched from afar but did not let Blink know he too was alive. [Exiles (1st series) #5-6]

Victor lead his team on various wetworks missions throughout the multiverse, doing the dark and dirty work that needed to be done to save realities. Missions such as sparking wars and mass murder were the norm for Weapon X. Eventually, Sabretooth was reunited with Blink when Weapon X and the Exiles were both tasked with completing the same mission on a post-apocalyptic world where Sentinels had all but wiped out mutantkind. The pair were ecstatic to see each other alive and well but their joy quickly turned to dismay when they learned their mission as to kill the child, David Richards, to prevent him becoming a despot. Victor chose not to reveal this mission to Weapon X, but they figured it out regardless, which forced him to kill his teammate Deadpool and side with the Exiles to protect the child. After a prolonged battle between the teams, Victor volunteered to remain on this world to raise David and ensure he grew up right. He said his goodbyes to Blink, but promised her they would meet again. [Exiles (1st series) #12-13]