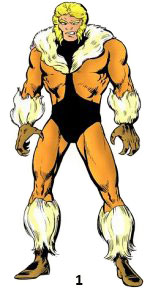 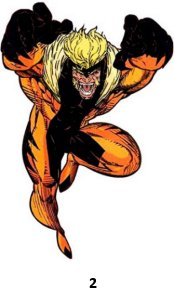 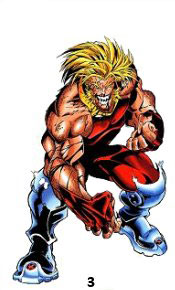 #1) During his earliest role as a freelance mercenary, Sabretooth wore a tan bodysuit, fringed with fur around his wrists, ankles and a mane-like ring, wrapping from his back, around his shoulders and coming to a point mid-chest. Above the mane to his neckline and down through his waist and crotch, his tan bodysuit was regularly trimmed with black, though this changed from time to time. [Iron Fist (1st series) #14]

#2) Sabretooth’s second costume kept the tan color, but changed to a dark brown trim which adorned his gloves to the forearm and wrapped around his shoulder, shooting down like a stripe along the front and back of his torso, ending along his inner thigh. Dark brown stripes subtly rimmed his outer thigh, reminiscent of cat stripes. As before, Sabretooth wore a crest of fur reminiscent of a mane, but this one did not connect in his front. Unlike before, he wore a headdress, though it still left his face and hair exposed. [X-Men (2nd series) #5]

#3) After being drafted by the US government but before being assigned to X-Factor, Sabretooth was sent on a mission with a new costume. It mainly consisted of a red bodysuit which ended at his shoulders, leaving them and his long arms exposed, and fingerless gloves of the same color. Around his neck, connecting the front to the back, was a gold-colored, metal collar. Completing this ensemble were metal boots which ended above his kneecap.[X-Factor (1st series) #122] 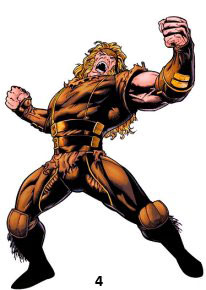 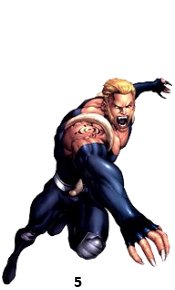 #4) Once again on his own, Sabretooth adopted a new look. This new costume reflected a rugged, mountain-man look. Mainly brown, with twinges of tan, this costume was comprised of several pieces as opposed to his bodysuits and it covered his whole body with the exception of his forearms and his hands below the wrist. He kept his headdress, but it was scaled back, covering only his forehead. [Uncanny X-Men (1st series) #388]

#5) After being shanghaied into the new Weapon X program, Sabretooth wore a new costume. The new bodysuit was mainly blue, adorned with a belt with tooth-like trim and crescents on both shoulders arcing from back to front. The top of the bodysuit was more of a tank top and left his upper chest and arms exposed, with the exception of fingerless gloves. [Wolverine (2nd series) #165]

-) Once on his own again, Sabretooth returned to his second costume, keeping it for some time. 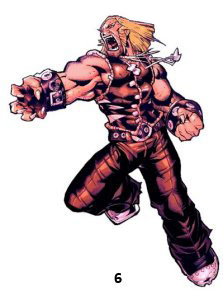 #6) Before seeking refuge with the X-Men from the Hecatome, Sabretooth adopted a tan-brown costume. Rather than a bodysuit, it consisted of brown trousers and a vest-like top, keeping his arms bare from the shoulders down. The outfit was trimmed with buckles and wrist manacles and over the whole ensemble he regularly wore a cloak trimmed with a mane of fur. [X-Men (2nd series) #188]

#7) After his apparent return from the dead, Sabretooth readopted a bodysuit. Below the waist, the costume was tan, while above the waist it was brown, covering all of his arms to fingerless gloves. His headpiece helped push back his long hair, causing it to crest in a mane-like appearance. [Wolverine (2nd series) #300]