On Earth-99746, saurians were the dominant species on Earth instead of mammals. Doctor Karl Lykos, a pteran, had become the leading scientific expert on the Savage Land, a polluted urban metropolis in Antarctica where the saurian High Evolutionary attempted to evolve primitive mammals into "human beings". Lykos joined Britannicus Rex and Excalibur on a journey to rescue the Fantastic Five from the Evolutionary and the Savage Land. 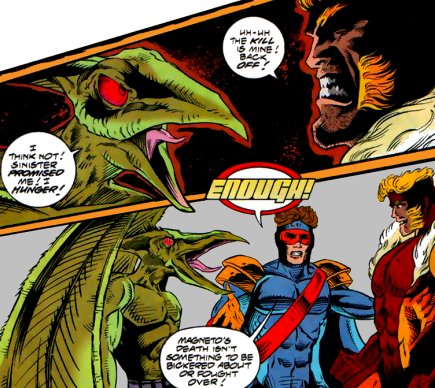 In What If...? (2nd series) #74, Mister Sinister decided to form his own team of X-Men early in mutantkind's history, as a counterpoint to Xavier's original X-Men. Sauron was a member of Sinister's team along with Sabretooth, Madelyne Pryor, and Sinister's adoped sons Cyclops and Havok.

During the Age of Apocalypse, Soaron was part of a traveling theatre troupe of Outcasts led by Forge. Haughty but loyal, Soaron assisted his fellow dissidents in attacking Apocalypse's supply lines and freeing humans taken for the Cullings. 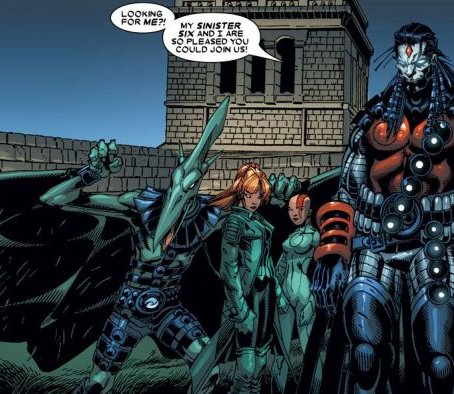 During one mission, however, his wing was damaged by the Infinites and he required medical attention. Because of this, Soaron was mostly absent when Domino and her mercenaries came looking for Nate Grey on behalf of Apocalypse, with most of Forge and Domino's allies killing each other in the process. After Nate had a fateful encounter with Forge's killer and his own creator, Sinister, he vowed to go after Apocalypse directly. Soaron and the only other Outcast survivor, Sonique, said their good-byes to Nate before he left.

It was later revealed that Soaron and Sonique apparently did not get far, for after Sinister revived he captured them, forcibly re-programming them to serve in his Sinister Six over the next several years. Soaron and the Six confronted Magneto's X-Men. He struck down Quicksilver, but was killed in turn by Magneto.

During the House of M, Sauron was a member of the Red Guard, an elite team of SHIELD agents who served Magneto and the House of Magnus in the mutant-led timeline. 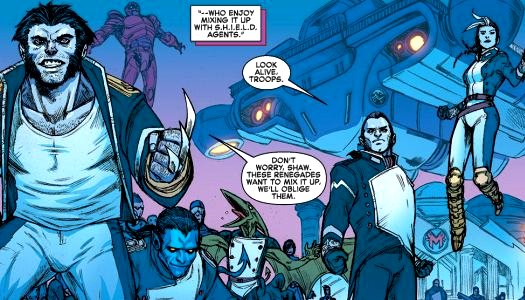 On Battleworld, a divergent version of the House of M timeline was recreated and maintained by God Doom. Sauron held a similar position in the Red Guard for this domain as well.

In Weapon X: Days of Future Now, the War of the Programs continued unabated for some time. Sauron betrayed Brent Jackson to Malcolm Colcord, the Director, and his Sentinels eliminated Jackson and his version of the Weapon X Program. Sauron and the Weapon X agents rejoined Colcord and, in a highly successful strike, Sauron and Mesmero used their combined hypnotic abilities to overpower Charles Xavier, and with him, the X-Men. When the Drector ordered his Sentinels to kill the X-Men, however, the Sentinels countermanded his orders and killed ALL mutants, including Wild Child and Mesmero. Sauron only barely survived after the Sentinels confirmed he was a non-mutant variant. 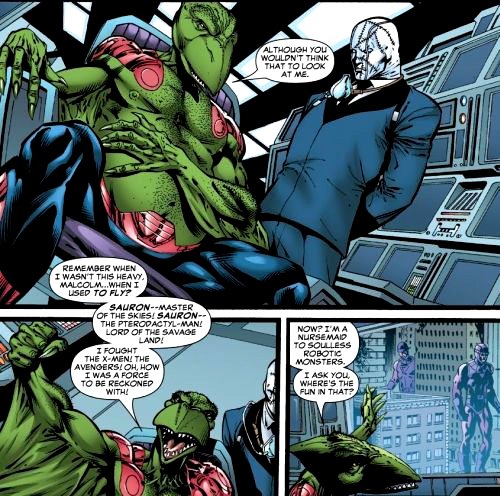 Over the next two decades, the Sentinels grew increasingly beyond the control of Colcord or any human, pursuing their mutant-hunting programming to the fullest. Sauron and Colcord remained advisors to the Sentinels, but had little true power left. As time passed, the taste of mutant life-energy from the Sentinels' captures began to lose its value to Sauron. He eventually aided the remaining mutants, passing on key information about the Sentinel Control Center to Magneto while hiding the mutants from Sentinel scans. When Master Mold discovered his treachery, Colcord was dispatched to address the issue. With more than a few mixed feelings, the Director allowed Sauron his last words before shooting the Pterodactyl-Man in the head.

In the Earth X universe, Rogue recklessly attacked Sauron after Gambit was killed by old enemies. In a last ditch effort to overcome her own absorption powers, Rogue thought draining Sauron might alter her abilities for the better. She failed, as Sauron's own absorbing powers overcame hers, killing Rogue and making Sauron more powerful than ever.

In Team X 2000, roughly twenty years in the future, the Shi'ar had conquered Earth thanks to the machinations of Alanna Neramani. majestrix and child of Lilandra and Charles Xavier. In the Shi'ar occupation, Alanna elevated the bird-like among the humans, making Angel her king regent, Vulture a select vassal, and Sauron a commander in her private guard. Sauron had no love for humanity and relished the power he was given. Rebels called Morlocks were led by Team X, mostly former X-Men, who tried to end Alanna's tyrannical control. Sauron successfully fought Wolverine on several occasions, even taking his eye. 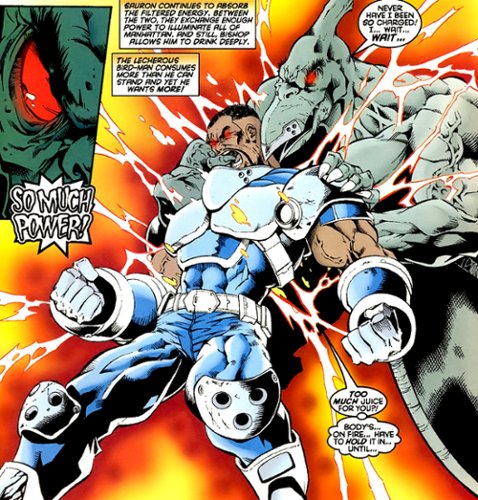 When Bishop and Deathbird arrived from the past, the balance of power changed. Alanna prided herself on following the example of her long-lost aunt, but the actual presence of the legendary Deathbird was a potential threat to her reign. Meanwhile, Bishop joined forces with the Morlocks to target the perimeter shield that prevented the army of rebels from storming the gates. Sauron arrived to stop the rebels, and destroyed the explosives they intended to use. Bishop's back-up plan was to destroy the shield generator with his own energy rechanneling powers. Bishop could not contain the full energies of the generator himself, but he tricked Sauron into using his own bio-energy draining powers on Bishop. Instead of killing Bishop, Sauron, became a second conduit for all the generator's power (converted from electromagnetic energy into bioenergy inside Bishop, and then absorbed as Bishop's life-energy by Sauron). The shield came down, and the rebellion successfully overthrew Alanna, while Sauron lost an eye to Bishop matching the injury he previous caused Logan.