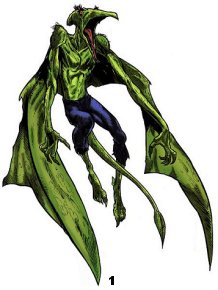 1) Like the Incredible Hulk or the Lizard, Sauron is often left wearing whatever tattered pants Karl Lykos was wearing when the transformation occurred (shirts are typically shredded by the emergence of his wings). Sauron is covered from head-to-toe with green scales hardening his body from injury. His fingers typically end in sharpened talons while his toes become moderately opposable, enough to lift and carry items while his arms control his leathery wings in flight. Sauron retains some vestigual hair from Lykos at times, especially when the transformation did not come with an enormous amount of energy. He also develops a sharpened beak with a bony ridge protrusion from the back of his head, like a pterodactyl. [X-Men (1st series) #60] 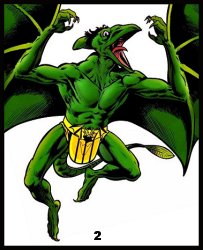 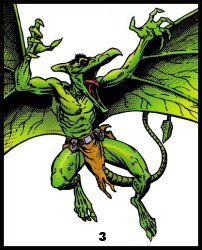 2-3) In the Savage Land, both Lykos and Sauron became fond of simple loincloths for clothing, as the extreme tropical environment of the hidden jungle required little else for protection.  He also often wore a simple belt with a gun holster. During his prolonged periods as Sauron, Lykos occasionally adopted a more ornate codpiece or loincloth made of flexible metal or other golden material. [X-Men (1st series) #115] 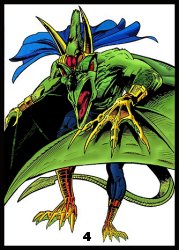 4) During a period of near-madness where he nevertheless managed to conquer part of the Savage Land, Sauron wore what he thought was more royal attire befitting his station. This included a jeweled headdress with sharpened horns, metal clawed gloves overlacing his natural talons, and similar metal boots below his dark blue pants.  It also included a short, blue cape of all things.  [Wolverine (2nd series) #69] 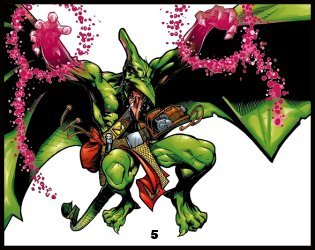 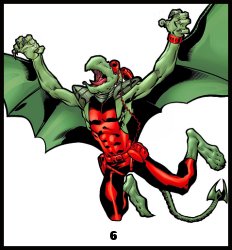 5) Returning from the Savage Land, Sauron began wearing a loincloth again, this time of red cloth with golden scale embroidery. He also made use of a bandolier and utility belt carrying handguns, satchels, and other modern tools. [Uncanny X-Men (1st series) #353]

6) After being recruited by the Weapon X program, Sauron's physical powers were greatly enhanced and he was outfitted with additional equipment.  His uniform consisted of either a red or grey sleeveless bodysuit with a red utility belt. He also wore armored shoulder pads with a mounted weapon and a visual sighting device for enhanced vision.  He wore a red wrist device which provided directional mapping as well.  [Deadpool: Agent of Weapon X #1] 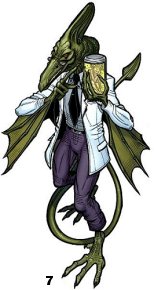 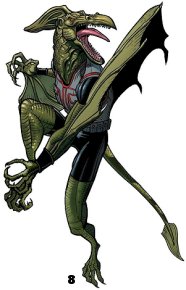 7-8) As Mad Science Teacher for the Hellfire Academy, Dr. Sauron wore an official-looking suit, tie, and lab coat. For Gym class and field work, he wore black spandex shorts and a matching short-sleeved shirt.  Over this, he wore a white vest with red piping and several pockets.  He also wore black wristbands and occasionally a pair of red-lensed goggles. [Wolverine and the X-Men (1st series) #31]