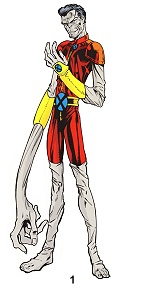 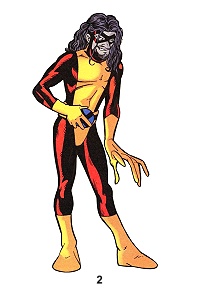 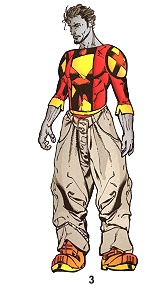 1) Skin's first costume was a variation of Generation X’s standard uniform: a red bodysuit with yellow gloves, and a blue 'X' on the belt. As Angelo had problems to keep his additional skin under control, his costume had shorter pants and no boots, sleeves or elbow padding like the uniforms of his teammates. [Generation X (1st series) #1]

2) When Adrienne Frost had the Massachusetts Academy reopened to the public, Generation X adopted new costumes to keep their identities secret. Besides the addition of the mask, these costumes had a more equal red-and-yellow color scheme and somewhat resembled the training uniforms of the X-Men. At this point, Angelo had apparently so much control over his extra skin that he didn’t need the bare sleeves and legs anymore. [Generation X (1st series) #51]

3) Following the school’s secret of harboring mutants being outed, Generation X redesigned their costumes again. The masks were gone and Skin now wore gray baggy pants over a red bodysuit with half-long sleeves, a stylized red and yellow X on the chest and X-logos on the shoulders. [Generation X (1st series) #63]