Angelo Espinosa was born and raised in a lower-income neighborhood in Los Angeles mostly inhabited by Hispanic residents. It is unknown what became of his father, though by the 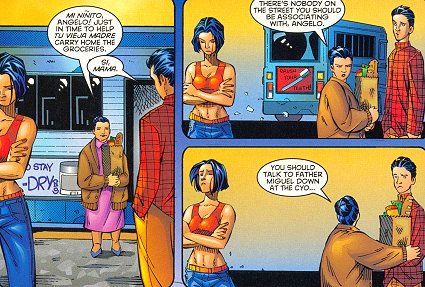 time he was a teenager he was living alone with his mother. The religious woman didn’t approve of her "Angel’s" girlfriend, Tores, who was involved with a local gang, which also included her cousin Lupo and their friend Gordo. Angelo tried to convince his girlfriend not to hang out with the gang so much, but just like he didn’t find the strength to stand up for Tores in front of his mother, she couldn’t act against her family’s wishes either. 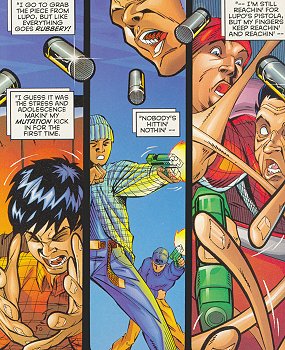 One night, the four teenagers were cruising in Tores’ car, when they crossed the border of some rival gang’s territory. Tores had intended to make peace with their rivals, but Lupo and Gordo had other plans. They pulled out their guns and proceeded to open fire. Angelo tried to reach for Lupo’s gun but, due to the stress, his mutant powers kicked in and his skin stretched, causing him to panic and pass out. When Angelo came around again, the car was on fire and some thief grabbed his wallet from his pocket. Even worse, Lupo and Tores were nowhere to be found, Gordo and two members of the rival gang were dead and Angelo was holding a gun in his hands. He barely made it out of the car before it exploded, with the pickpocket being caught in the blast in his stead.

Since the thief carried Angelo’s wallet, the police presumed Angelo himself was dead due to how unrecognizable the body was after the explosion. Angelo didn’t clear up this misunderstanding, as he assumed that Tores had shot 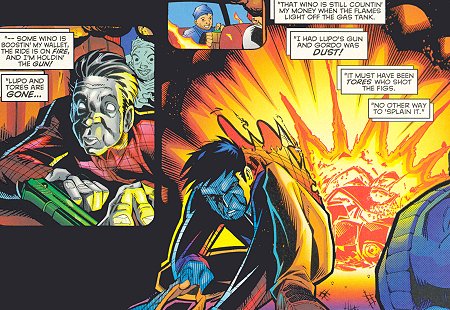 the rival gang members and he didn’t want to have to testify against her in a murder case. [Generation X Wizard Special #1/2]

Angelo jammed a plug in the gun’s barrel so that it could not be used again, and kept it as a painful reminder of the night that forever changed his life. [Generation X (1st series) #34] For the next few months, he tried to keep as low a profile as possible. He used to wear wide clothes, trying to hide his additional six feet of skin, though there was nothing he could do about its grayish tone.

Eventually, Angelo was attacked and kidnapped by the techno-organic creatures called the Phalanx. Along with several other young mutants, he was being analyzed by the Phalanx for a 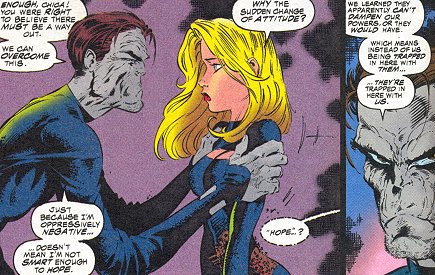 way to assimilate mutants as easily as they could assimilate humans. Angelo seemed to cope with their situation somewhat better than most of the other captives. The X-Men being rather busy on their own, it was the unlikely grouping of Banshee, the White Queen and Sabretooth who went after the captured teenagers. When they reached the Phalanx hideout, however, they found the techno-organic collective to be more than a match for them. It was one of the other captured mutants, Clarice “Blink” Ferguson, who sacrificed her own life and saved her new friends by destroying the Phalanx with her teleportation power. [Uncanny X-Men (1st series) #317, X-Men (2nd series) #37]

Following the incident with the Phalanx, Xavier decided to open a new class for mutants in training, though not at his mansion. While the mansion in Westchester was renamed to the “Xavier Institute for Higher Learning,“ the new “Xavier’s School for Gifted Youngsters“ was opened up at the old Massachusetts Academy, with Banshee and Emma Frost serving as 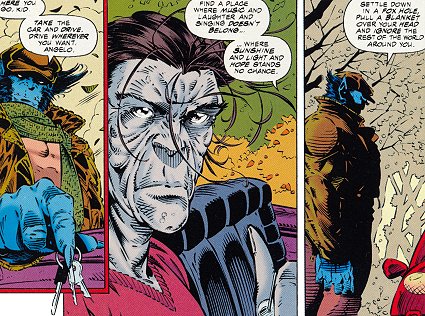 Headmaster and Headmistress. Angelo was offered to train there too, but at first he refused, instead opting to go back to his isolated life. It was Hank McCoy, aka the Beast, who managed to get through to Angelo and, after he gave it some further thought, he changed his mind and enrolled, receiving the codename Skin. However, whereas most of the other students dreamed of becoming X-Men some day, Angelo only wanted to learn how to fully control his power. [Uncanny X-Men (1st series) #318, Generation X (1st series) #10]

Angelo soon developed a witty friendship with his teammate, Paige Guthrie, and they would make fun of each other’s backgrounds, referring to themselves as “city mouse” and “country mouse.” Paige was also one of the few people to figure out that Angelo was rather scared of his

extensive skin tearing or shredding. This fear was also the reason for Skin volunteering to do monitor duty when the rest of the team searched the estate for a newly arrived and confused student named Penance. The girl posed a danger to everyone around her because of her razor-sharp skin, but Angelo in particular was vulnerable to her. [Generation X (1st series) #1-3] 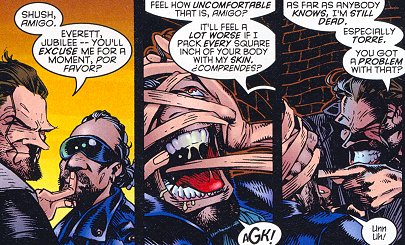 During a field trip to New York City, Angelo bumped into someone from Los Angeles, who immediately recognized him and was quite happy to see that the reports of his death were wrong. Not wanting his cover to be blown, Angelo took the guy away from his teammates and lured him to a dark alley, where he threatened to seriously injure, if not kill him, should he tell anyone he had seen him. Especially Torre. [Generation X (1st series) #5] 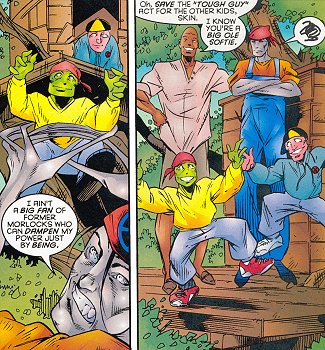 When the Massachusetts Academy took in Artie Maddicks and Leech, the mutant boys took a liking to Angelo, despite him putting on a “tough guy” attitude. Even though he helped his teammate, Synch, to build the little guys a tree house in Generation X’s biosphere, Angelo continued to made sarcastic remarks and pretended not to like children, but he couldn’t really fool anyone. [Generation X (1st series) #6-7]