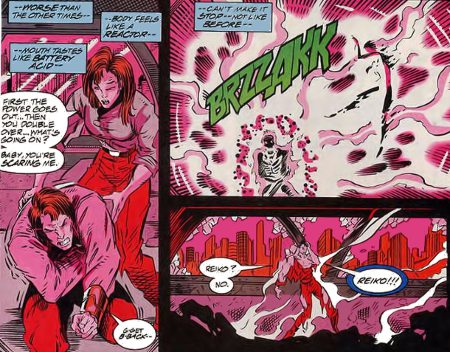 Timothy Sean Michael Fitzgerald had a normal life once. He grew up in the Corporate workers' dormitories and became a mechanic in the Synthia transport pools once he came of age. Tim achieved a comfortable middle class lifestyle in post-Corporate America; mildly useful to the MegaCorps, but with nothing exploitable about him worth drawing their attention. That is, until he discovered he was a mutant when he was nineteen years old. Tim started seeing power outages wherever he went, and soon realized the power was flowing into him. Tim hid his mutation for a time, but the energy build-up in his system increased beyond his control. On the last day of his normal life, Tim doubled over in pain at home while trying to keep the energy he absorbed in check. His girlfriend Reiko didn't understand why the power had gone out or why Tim was hurting, and she tried to comfort him. Tim warned her to keep back, but it was too late -- the energy radiated explosively out from his body, destroying his house and killing Reiko in the process. [X-Men 2099 #4] 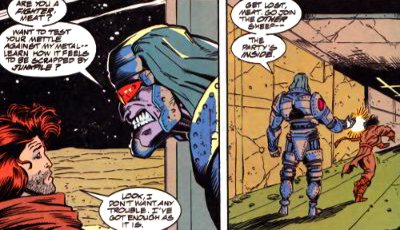 Afraid he would end up a Bio-Shop test subject on the Red Market, Tim ran away and began living on the streets. After several months, he was found by Shakti Haddad on the streets of Kingman. She told him about the gatherings at the Nuevo Sol Arcology and gave him an 'X' card for entry. Not having any other options, Tim made the trek out into the Nevada desert. He nearly turned around when confronted by the Arcology's "bouncer," Junkpile, who gave Tim a hard time before taking Shakti's card and letting him in.

Inside, Tim was overwhelmed by the dance rave atmosphere of the Arcology, hundreds of people where there should be none. He met Serpentina, another mutant who introduced him to the Arcology's philosophy of equality for the abused and downtrodden in post-corporate America. Tim and Tina bonded as she showed him around, and they stood together to listen to Xi'an, the founder of the gatherings, as he laid out his message of unity for all. 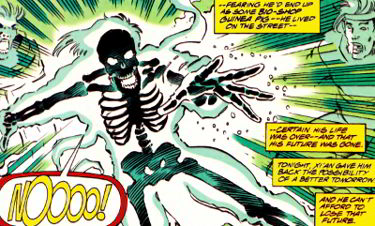 Tim was deeply moved by Xi'an's words, but his stomach suddenly twisted when he spotted a sniper on the balcony. Reacting instinctively, Tim lashed out with his powers as he drained the Arcology's energy supply before releasing it as a bio-blast that spoiled the assassin's aim.

Despite Tim's efforts, Xi'an still took a bullet to the chest, and enforcers from the Greater Nevada Syndicate descended upon the Arcology. Tina rushed Tim to the stage as Xi'an's inner circle prepared to evacuate him. As he began to pass out, Xi'an welcomed Tim to the X-Men. [X-Men 2099 #1]

Fitzgerald and the X-Men loaded up into their van, the eXperience, to try and escape the Syndicate's stranglehold. Thanks to the mutant eco-warrior, Bloodhawk, they managed to flee the Arcology and camped at the abandoned Hoover Dam. Word on the net was that the Syndicate blamed Xi'an for the death of their leader, Noah Synge, who had been molecularly decomposed in a manner similar to Xi'an's power. Junkpile had been paid off to let the sniper into the gathering. Half the team went to search the Synge Casino for evidence of Xi'an's innocence, while Tim, Tina and Shakti stayed behind to monitor Xi'an's condition. They were found by Junkpile, who was looking to recover Xi'an for the Synge family. Tim still couldn't control his bio-blast enough to put down Junkpile, and the metallic monstrosity battered through the X-Men to take Xi'an for his bosses. [X-Men 2099 #2] 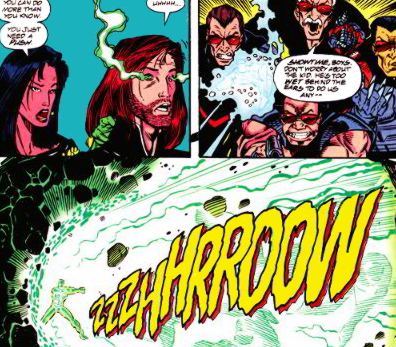 When the others didn't report in, Tim's group realized they had been captured as well, and snuck into the casino to find them. They freed the X-Men from stasis gel capsules and went looking for Xi'an. Despite his lack of control, Tim proved enormously helpful to the group. When they were confronted by the Rat Pack -- the Synge enforcers who took down the first team of X-Men -- Cerebra used her powers to trigger Tim's bio-blast when he couldn't access it consciously. The entire Rat Pack were floored in the energy wave and didn't get up again. 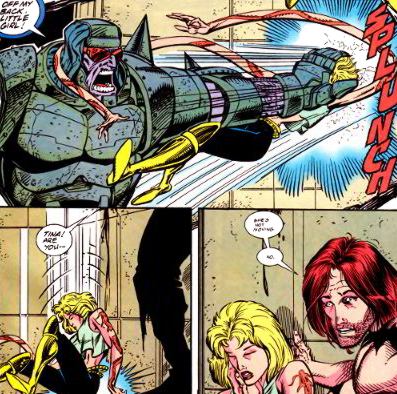 Junkpile was guarding Xi'an's medical suite for the casino, and confronted his former comrades. Before anyone else could react, Serpentina tried to jump the traitor, only to have Junkpile crush her head against the nearest wall. Even Tina's flexible body couldn't withstand the impact, and she died instantly. Tim freaked out and charged Junkpile himself, but was tossed out the window. Bloodhawk arrived to save Fitzgerald from a long drop, and it was the miraculously recovered Xi'an who brought down Junkpile in the end. The death of Noah Synge turned out to be a family feud, with his son Lytton responsible and his daughter Desdemona taking over the casino once Lytton's deed was revealed. The X-Men were allowed to leave and bury their dead. In the aftermath, Xi'an asked Tim if he would be staying with the X-Men. Timothy wasn't sure what to do at first, but he knew Serpentina believed in Xi'an's dream, and he felt he owed it to Tina to fight for the mutant cause. [X-Men 2099 #3] 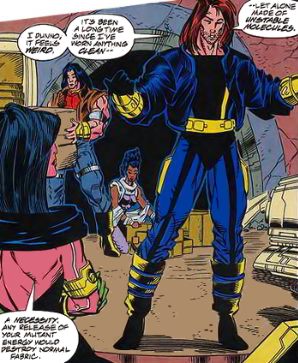 As the X-Men prepared to leave the Arcology and go on the road, they finally got Fitzgerald out of his homeless rags and into clothes made of unstable molecule fabric which wouldn't be destroyed every time he used his powers. Things quickly became complicated when Meanstreak walked out on the X-Men to go help a friend of his in trouble in New York. Fitzgerald and Krystalin were sent by Xi'an to bring him back, only to run into La Lunatica, a psychic vampire and enforcer for Controller-13 of the Theatre of Pain, an underground venue for torture, bloodsports and institutionalized sadism. The Theatre was interested in what entertainment mutants could provide, and wanted to capture the X-Men for experimentation. Despite the power at his fingertips, Tim still couldn't summon his abilities on command, and fell with his friends before Lunatica. 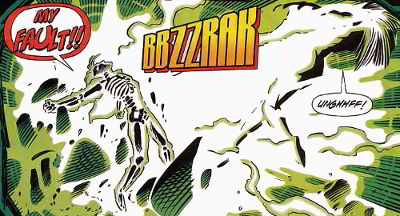 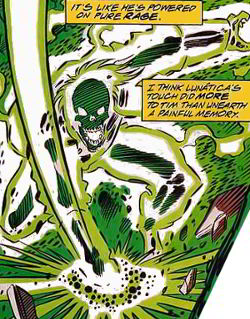 Back at the Theatre's Dark Room, Tim and the others found their ally Bloodhawk already a prisoner, and were fitted with inhibitor collars to suppress their powers. Fitzgerald was subjected to Controller-13's standard torture session: Luna's touch triggered flashbacks of intense emotional trauma, which were then mnemonically recorded by the Controller's equipment and sold to fetishists on the Red Market. Tim was forced to agonizingly relive the moment of Reiko's death, but the Controller underestimated Fitzgerald's power levels. Even through the inhibitor collar, Tim drained the Theatre's power supply and unleashed a seizure of energy that destroyed the equipment, shorted out the other X-Men's collars and knocked Luna for a loop. A supercharged Tim rampaged through the Dark Room, devastating the entire structure. Meanwhile, La Lunatica's own control collar was disabled, allowing her to free herself from Controller-13 and take revenge for ten years of servitude. Luna bore no grudge against the X-Men, but Tim still owed her for turning his head inside out. Still, Meanstreak was focused on getting to New York to help Boone, so a suddenly aggressive Fitzgerald let Luna go with a warning that they weren't finished with each other. [X-Men 2099 #4]