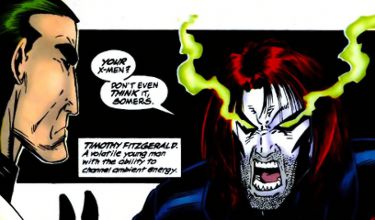 Halo City had a turbulent beginning as President Doom was ousted from power before construction was even completed. Tim and the Protectorate waited with baited breath for weeks to see if the new Corps-friendly government decided make an issue of them. They also had some internal struggles with Morphine Somers, who was essentially hiding out in Halo City after the fall of Doom's Black Cabinet, and wanted to use the X-Men as his "golden parachute" to retain power in Halo City. As the provisional governor until city elections were held, the X-Men were forced to deal with Morphine on a regular basis, but they neither liked nor trusted him.

Terrorism eventually reached Halo City's shores, but not from the new government. A group of zombie mutants called the Undead firebombed a medical polyclinic in Halo to get the X-Men's attention. Their leader, the Graverobber, was hunting for Cerebra's father Zail Haddad, but also had plans for Fitzgerald. Tim was led away from the other X-Men to an alleyway, where he was shocked to confront an undead Serpentina, resurrected by Graverobber on their way to Halo City as a psychological weapon against the Protectorate. It worked. Before Fitz could recover his composure, the enslaved Tina used a Venomstinger pistol to fire a lethal dose of poison into his chest. Timothy Fitzgerald's death was instantaneous. [X-Men 2099 #26] 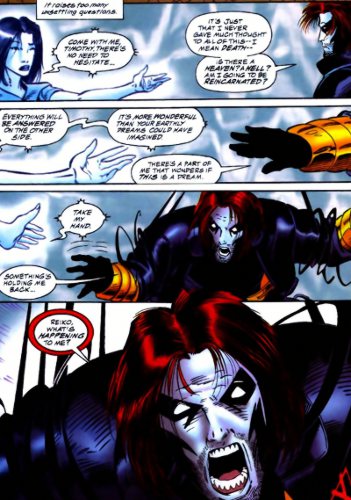 As the Undead stole Tim's body from the battlefield, his soul prepared to pass on into the light. He was miraculously reunited with his dead girlfriend Reiko, who welcomed him into the hereafter. The Graverobber had other intentions for Fitzgerald's soul, however. Using his mutant talent, Graverobber restored bio-electrical life to Timothy's inert body. On the spiritual plane, black tendrils enveloped Tim's soul avatar, pulling him away from Reiko and back to the physical world, a zombie unwillingly under Graverobber's control. [X-Men 2099 #27]

Graverobber intended to blackmail Halo City and the Protectorate into turning Zail Haddad over to him by leeching away all the energy from the Spark, Halo's power plant system. He had arranged for Fitzgerald's death to gain access to Tim's powers and free him from the limitations his human body clung to when rechanneling energy through his flesh. Tim tried to resist Graverobber's control, but felt the life literally flowing away from his body when he did. He was forced to stand down when Luna came for him, and couldn't help her when the Undead struck her senseless. [X-Men 2099 #28]

Once Graverobber placed Fitzgerald inside the Spark's power conduits, all of Halo City was under his control. Morphine Somers made a bluff of turning Zail Haddad over to Graverobber, but had Zail rigged with a neuro-charged bomb that went off, shutting down Graverobber's nervous system. With the puppeteer down, the strings were cut to his puppets and the Undead... died. Tim found his soul back on the luminescent plane with Reiko, free of Graverobber's influence. Reiko told him he wasn't quite ready to leave the physical world behind, however, and Tim soon awakened, somehow alive and well despite having died. The energy from the Spark flooded back into Halo's dynamos, but Tim felt permanently charged from the energies he had been conducting. The X-Men had a second funeral for Serpentina, cremating her ashes so that her rest couldn't be disturbed again, and Tim tried to come to terms with his increased powers and seeming immortality. [X-Men 2099 #29] 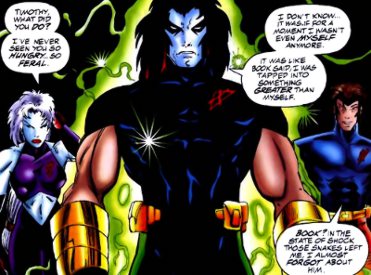 After the elections were over, Morphine Somers was voted out of office, allowing Fitzgerald to thankfully show him the door. However, he also had to accept Cerebra's resignation, as Shakti intended to devote her time to the Xavier Shelter for Indigent Children and the next generation of young mutants drifting into Halo City. Tim remarked on how far he'd come since Shakti found him living on the streets of Kingman, and told her she may leave the Protectorate, but she'd always be part of the X-Men. [X-Men 2099 #30] The issues with Tim's mortality were addressed further when he, Luna and Meanstreak went down to Mexico to rescue a savant named Book from the Quetzalcoatl Corporation. Book's captor, Javier Belize, was magically enhanced with the power of elemental lightning dragons. Although the energy serpents appeared threatening at first, Fitzgerald soon realized his augmented powers could absorb this magical power as easily as other sources. He could even trace them back to their genesis inside Belize's body, hungrily draining him dry of this energy and neutralizing the threat entirely. Book remarked that he knew Fitzgerald would be capable of this, and further implied that Tim's death wasn't what it seemed. [X-Men 2099 #31] 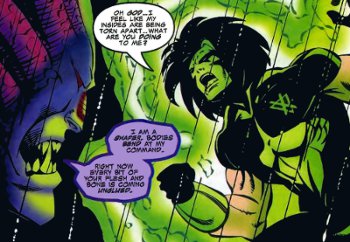 Any further mystery about Tim's condition was cut short when Halo City began flooding due to the planet-wide rising of the tides. While getting citizens to the safety of the boats, Tim and Luna confronted Vulcann the Bloodsmith and his new protégé the Darkson as they destroyed the city tower. Vulcann's flesh-manipulating powers grabbed hold of Fitzgerald and forced him apart, pulverizing his body and dispersing it to the winds. [X-Men 2099 #34] 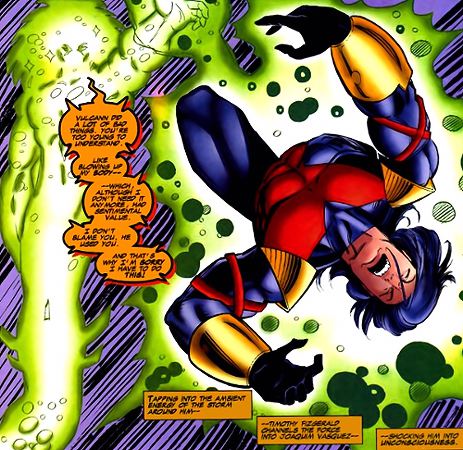 Remarkably, Timothy recovered. Regaining consciousness as an orb of pure energy, Tim encountered "Reiko" again. He learned that Reiko was actually another energy being, who only assumed his dead girlfriend's form to communicate with him better. Reiko told him it was time to ascend into a higher plane of existence, but Tim refused to abandon the material world just yet. Vulcann and Darkson were trying to take control of the flotilla of ships escaping Halo City, and threatening his friends. While the other X-Men dealt with Vulcann, Fitzgerald managed to partially reform into a human shape, confronting his "murderer." The Darkson was immensely powerful, but also only an infant at his core, artificially grown to a useful age by Vulcann. Fitz recognized the kid was an innocent pawn, but still a threat. With a wave of his hand, Fitzgerald concentrated the energy of the storm around them, flooring the Darkson with a single blast. 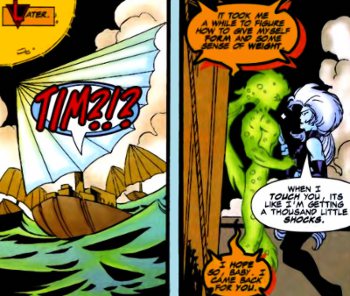 As the X-Men led the flotilla to the Savage Land, one of the only dry spots left on the Earth's surface, Tim and Luna reunited. With his human body gone, Fitzgerald was only a mass of energy vaguely resembling a man. Still, he told Lunatica he came back out of love for her, and promised to remain by her side. [X-Men 2099 #35]

Despite his promise, however, Fitzgerald wasn't seen among the X-Men and refugees once they made it to the Savage Land. Whether he could not maintain his connection to the substantive planes or chose to leave is unknown, but the ultimate evolution of Timothy Fitzgerald was left in the dark.

Fantastic Four vs. the X-Men #3