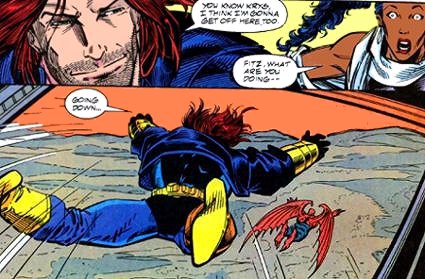 Tim's behavior continued to be markedly unstable during their trip to New York. Although he could now activate his powers at will, Fitzgerald also started acting severely "judgment-impaired." He became a wise-cracking thrill seeker, laughing at the consequences of his actions and performing unwise stunts like jumping out of an airship to grab Bloodhawk's legs for a ride, just for the fun of it. The trauma unleashed by Lunatica's touch undoubtedly left him unhinged. [X-Men 2099 #5-6]

Once Fitzgerald and the others finished their business in New York, they reunited with Xi'an and the X-Men in the search for Mama Hurricane, a link to the underground railroad of mutants who may have avoided the Great Purge fifty years ago. During an ego-driven rumble with Hurricane's protectors, the Freakshow, Fitz was momentarily shaken out of his self-indulgent streak. Tim tumbled into Metalhead, inadvertently knocking his friend into Contagion, a DeGen who carried a crippling virus. Eddie was horribly mutated and misshapen by the contact, and Tim blamed himself for being reckless in the fight. Xi'an's healing touch stabilized Metalhead, but he was permanently deformed and chose to stay with the Freakshow after the two groups made peace. [X-Men 2099 #6-8] 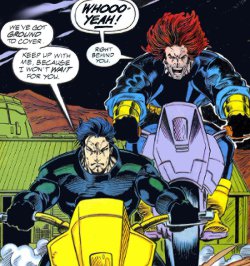 Despite this brief shock of reality, Tim's unstable behavior quickly resurfaced. When Xi'an experienced his own personality shift after a psychic battle with Zhao, the Master of Mindfire, he impulsively declared the X-Men a failed experiment and walked away from the dream. Leaving behind the Zen spiritualist to become a self-interested biker again, Xi'an was prepared to set off on his own to pursue his own goals. Instead of trying to talk him out of it, Fitzgerald invited himself along on Xi'an's breakdown. 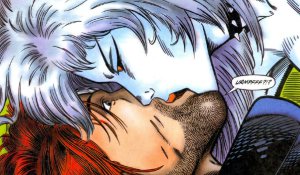 Xi'an still intended to track down the Driver, the next leg in the mutant underground provided to him by Mama Hurricane. By coincidence, Xi'an and Fitz ran into La Lunatica at a truck stop. Tim hadn't forgotten the damage Luna did to his psyche during their last encounter, and instinctively started a fight with the woman. After pinning Fitz in the parking lot, however, Luna turned aggression into passion by kissing him. Fitzgerald soon reciprocated, and their relationship took a very unexpected turn. [X-Men 2099 #10]

Luna joined Fitzgerald and Xi'an on their trek to El Paso. She related her story, how she was still on the run from the Theatre of Pain after escaping the Dark Room and reneging on her "employment." She wanted Fitzgerald's help protecting her from Circuit Skips and trackers dogging her tail. In El Paso, Xi'an privately hooked up with his source, Broken Haiku, while Luna and Tim saw the sights. A black market vendor in "personal aesthetics" offered Fitzgerald an improvement for the grease paint on his face Lunatica had applied during their parking lot brawl. This aerosol-based osmiotic synthetic created a "deathmask" visage Fitz kept for personal use from then on.

Unexpectedly for Tim, before they ran into each other Luna had already arranged for other protection to meet her in El Paso: Junkpile. Tim had been waiting for another shot at the scrapmetal Judas ever since Tina's death, and the two of them nearly leveled the shopping complex before Lunatica got between them. Luna's influence on Tim got him to calm down, but it wasn't nearly strong enough to make him accept Junkpile as a partner. When Xi'an returned from his rendezvous with a firm location for the Driver, Tim left with him, forcing Luna and Junkpile to tag along if she still wanted Fitzgerald's help against the Theatre of Pain later. 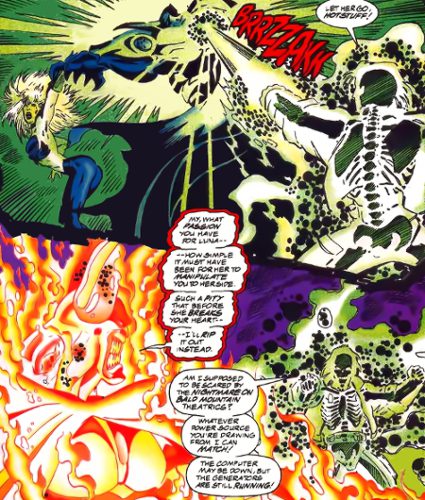 The motley quartet found the Driver's Garage at an isolated Siloblock in the middle of the desert. The thrill of the adventure quickly died once the Driver caged them in a laser grid, and then Brimstone Love, lord high grandisimo of the Theatre of Pain, arrived to collect Lunatica. Luna was nearly catatonic with fear after Brimstone's arrival, and Tim stepped in to protect her from her former master. Powerful as he had become, however, even Fitzgerald had limits. His bio-energy charge was reliant on the Garage's generators, while Brimstone Love's geothermal fury came from the molten earth itself. After Junkpile and the Driver's confrontation destroyed the information Xi'an came to find, however, the X-Men's former leader decided to throw in with Brimstone Love and the Theatre of Pain to gain the advantage. Xi'an struck down Tim from behind while he fought Brimstone, and offered his services to the Theatre. Brimstone Love accepted and teleported away with Xi'an, granting Luna a stay of execution due to the exciting new hire she inadvertently led him to find. Furious at Xi'an's betrayal, Tim shook off the last of his irresponsibility and declared that, if Xi'an was really going to abandon the dream, he would take up leadership of the X-Men and fight for it himself. [X-Men 2099 #11-13]

Back at Zhao's compound, Fitzgerald told the rest of the X-Men about Xi'an's descent into evil with the Theatre of Pain. The others were initially hesitant about Tim's declaration of leadership and him bringing Lunatica on board as a new recruit. Tim focused on Cerebra and convinced her that he had come a long way from the insecure neo-mutant she invited to the gatherings. Shakti soon agreed to support Tim's leadership, and they began making plans to locate and shut down the Theatre of Pain. [X-Men 2099 #14-16]

Unfortunately, the Theatre of Pain did not remain idle while the X-Men prepared themselves. Xi'an and the Theatre returned to the compound and left behind a bomb. Tim and the others barely got out before their temporary home exploded. [X-Men 2099 #19] Needing to take back the initiative, Timothy and the X-Men made contact with the information broker called Broken Haiku, who provided them with Xi'an's location among the Theatre's holdings: the Floodgate Bio-Resources Processing Center in Death Valley, colloquially known as the Slaughterhouse. [X-Men 2099 #22]

Tim, Shakti and Luna went undercover to Floodgate, among the horde of fringers selling themselves to the Red Market for the chance of food or care. They tried to stay under the radar (with Tim's energy siphoning powers causing a brown-out of the Theatre's mutant detector equipment), but there was nothing they could do to stop Xi'an himself from betraying them to security once he spotted them. As Controller-X, Xi'an had quickly become one of the Theatre's elite. The Theatre of Pain's security was thorough, and Tim was beaten down twice in rapid succession before getting dumped into the sewage treatment pipes.

In the garbage dump, waiting for industrial solvent to pour down on top, Timothy was surprised to find a fellow "prisoner" among the refuse: Junkpile, recently reactivated by President Doom as an agent of SHIELD. The two adversaries managed to put aside their animosity and plan a breakout. The shielded walls of the dump prevented Tim from getting a charge from the Theatre's generators, but Junkpile found a working power pack in the scrap, allowing Tim to power up and blast them free. As they escaped, Junkpile was surprisingly on the verge of apologizing for Serpentina's death, but they were attacked by Lunatica, who was back under control of a Theatre obedience collar. Luna disabled Junkpile before Tim drained and destroyed her collar. The couple had to move on, and abandoned Junkpile to find their friends. 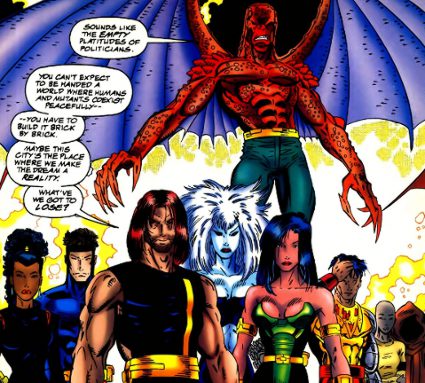 The other X-Men had arrived in the meantime, and together they disrupted Xi'an's display on the Theatre's main stage, drawing the attention of Brimstone Love. Brimstone was driven into retreat by Xi'an and the X-Men, but not because Xi'an had regained his humanity: the X-Men's former leader merely wanted to claim the power of the Theatre of Pain for himself. Fitzgerald tried to reason with Xi'an in the aftermath and draw him back to the dream, but Xi'an violently rejected the idea, crying out that no one was worthy of the dream so why even try. In the end, Luna's touch shocked Xi'an back to his senses, unleashing the emotional turmoil within him to free his inner demons and force him to face the truth behind his actions.

Meanwhile, the X-Men found a surprising new direction for their lives. Junkpile's back-up arrived from SHIELD and the Ministry of Humanity. President Doom and Minister Morphine Somers addressed Fitzgerald and the X-Men, commending them for their efforts bringing down the Red Market. Doom revealed he had ordered the construction of a city in the Southwest that would serve as a haven for mutants, fringers, DeGens and other downtrodden and maligned victims of the former Corporate America. Thousands of victims released from the Slaughterhouse by the X-Men would find a government-protected home there. Halo City would still need protection from unsympathetic factions, however, and Doom offered to make the X-Men into the Protectorate of the city. Fitzgerald and the others accepted his offer, coming full circle from the gatherings at the Arcology to once again build a mecca in the desert. [X-Men 2099 #23-25]