In the original 2099 Universe, Spider-Man continued his struggle against Alchemax. His life fell apart for a time when he learned not only that Tyler Stone was his father, but also the "Rapture" he was drugged with was a harmless simulation of the effects, meaning he never needed to become Spider-Man in the first place. He broke up with Dana while struggling to deal with these revelations, and reunited with Xina for a road trip. By the time he returned to Nueva York, Doom had overthrown the corporate government and named himself President of the United States, by right of revolution. With Tyler on his Black Cabinet as Minister of Corporation, Miguel was named the new CEO of Alchemax. Doom also separately offered Spider-Man the position of Minister of Superhuman Affairs.

In the months that followed, Kron Stone resurfaced after his reported death in possession of the original Spider-Man's alien costume. Becoming Venom 2099, Kron killed Dana before Spider-Man captured him. Eventually, Miguel revealed to his parents that he was secretly Spider-Man, and he knew Tyler was his father. Gabriel retreated further into himself after Dana's death, and for a time it appeared as if he had become Goblin 2099, although it was actually an imposter. Furthermore, through a time travel adventure, Miguel met Peter Parker and reversed at least ONE of the cataclysms responsible for the end of the Heroic Age.

The arrival of a Phalanx moon radically altered the tidal patterns of Earth, melting the polar ice caps and raising "sea level" by at least a kilometer. Miguel and a portion of humanity fled to the Savage Land for survival. Miguel, Xina, and Doom later joined forces and ended the threat of the Phalanx. In the new world order that followed, Miguel and Xina married and reopened Nueva York from Alchemax Tower, connecting the highest sky rises above the waves with bridges and supports. 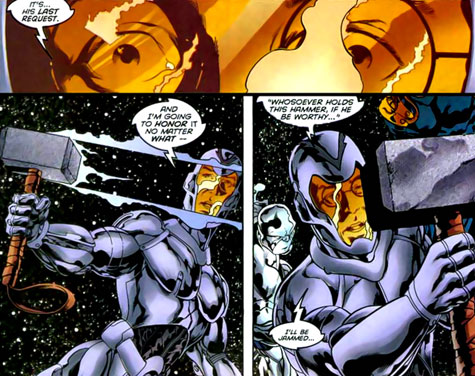 Hope for the future was restored when Captain America was found, once again frozen on ice since the end of the Heroic Age. Armed with the also-recovered Mjolnir, Steve Rogers and Miguel led Earth's heroes as the Avengers 2099 in breaking the interdict barrier established around the solar system by the Watchers, allowing humanity to reach for the stars once more. Although Steve Rogers was seemingly lost in the process, he passed on Mjolnir to Miguel O'Hara. For the next thousand years, Miguel O'Hara wielded Mjolnir as his symbol of office, bringing technological innovations such as nanotech, gene-splicing, and reduced aging to the people of Earth. After a thousand years of colonization, exploration, and interstellar diplomacy, Terrans became the premiere race in the cosmos, welcomed and respected by the great powers of the universe, all thanks to Miguel O'Hara determination to push humanity to be its very best.

In another 2099 reality, the future was not waylaid by the arrival of the Phalanx moon. Tyler Stone reclaimed the position of Alchemax CEO from Miguel, and O'Hara continued having secret adventures as Spider-Man 2099. The exact point where this timeline differs from the original 2099 universe has yet to be determined.

The Miguel O'Hara of this timeline was caught up in a temporal anomaly that threatened to erase Tyler Stone (secretly his father) from existence. Forced to team up with Alchemax to travel back in time and fix the anomaly, he confronted the Superior Spider-Man at Horizon Labs to fix the Time Door causing the problem, only to be abandoned in the past by Stone. Stuck in the present of Earth-616, Miguel witnessed the birth of Alchemax when the resources of Allan Chemical, Oscorp, and Horizon Labs came together into a new conglomerate. As "Mike O'Mara", the Spider-Man of 2099 took a job as assistant to Tiberius Stone, his own grandfather. 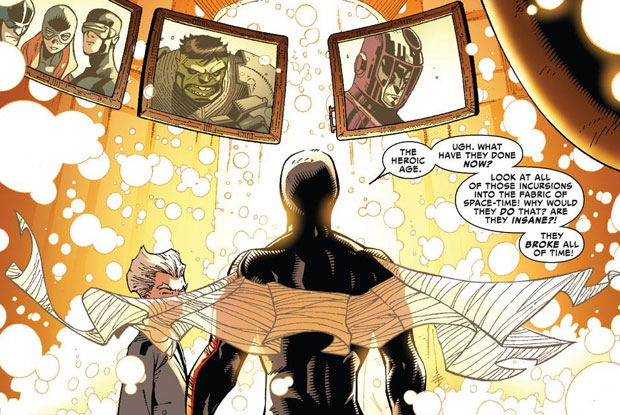 During an omni-dimensional conflict involving every Spider-Man ever, Miguel briefly returned to his own time before ending up back in the present. He continues to weigh his options between trying to get back to his own time (if that's even possible any more), and changing history for the better by being a positive influence on his grandfather and the development of Alchemax.

The future of 2099 was in flux after a version of Alchemax got ahold of a time machine and began influencing the past, causing a Timestorm. This version of Miguel O'Hara was a stand-in for Peter Parker, 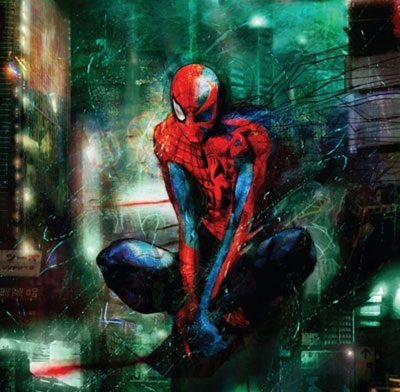 a science nerd stuck doing the homework of Kron Stone (apparently not his half-brother in this reality) while living at home with his widowed father, George O'Hara. During the timestorms caused by Alchemax's Chronosphere tech bringing the original Spider-Man and Wolverine into the future, Miguel was attacked by a genetically resequenced spider in science class and received spider-powers. He teamed up with Peter Parker to fight Kron, who had become Scorpion 2099 in the same accident. This Miguel was later killed and consumed by Morlun during Spider-Verse.

During the Destiny War, Avengers from every possible reality appeared for the final conflict with Kang and his Avengers allies against Immortus and the power of the Time Keepers. 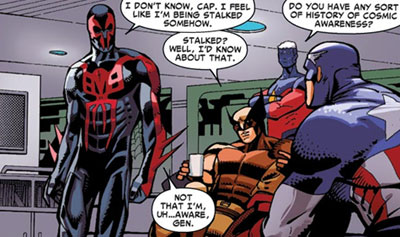 A version of Miguel O'Hara appeared in Avengers Forever #12 where the heroic Avengers alternates clashed with the corrupted ones guided by the Time Keepers. During Spider-Verse, it was revealed that this Spider-Man 2099 had traveled back in time to the same near-future that the Destiny Avengers Songbird and Captain Marvel hailed from. He was one of many Spider-totems consumed by Morlun of the Inheritors.

In an alternate timeflow from Time Flies, Spider-Man 2099 had his second encounter with Thanatos while hosting Captain Marvel and Starfox from the Heroic Age. They learned that Thanatos was actually an evil version of Rick Jones wielding the Destiny Force, 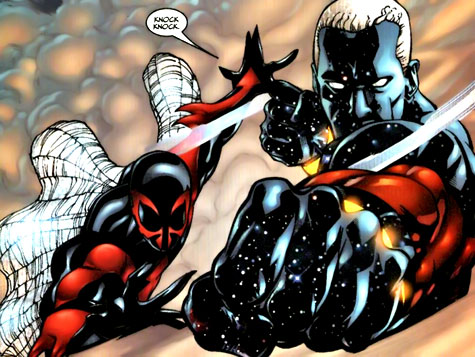 collecting artifacts of power such as the Spear of Destiny, the Eye of Agamotto, and Doctor Doom's time machine. The last artifact brought them into the Future Imperfect timeline and a fight with the Maestro, while Thanatos tried to re-write his own history throughout the multiverse. When Thanatos was defeated by present and future versions of Rick Jones, Spider-Man was sent back to 2099.

(For reference, the first encounter between Spider-Man 2099 and Thanatos occurred immediately after the timeline split between Exiles' Miguel and the original run of Spider-Man 2099 -- instead of retrieving Proteus during his Virtual Unreality experiments, Jordan Boone kicked off a series of events that made contact with Thanatos and the Net Prophet. Time Flies was NOT in synch with the original 2099 future, since Miguel and Gabriel were openly discussing Miggy's secret identity before Jordan Boone was transformed into Loki 2099, which is incompatible with that timeline. However, the time travel ramifications of Time Flies may have been responsible for these continuity "hiccups". Finally, Time Flies apparently DID happen in the "Superior 2099" future, as the Miguel O'Hara involved in Spider-Verse recently encountered the Maestro, and remembered the events of this story.

Still with us? Good.)