It is easiest to begin on Earth with a woman who, unlike Spiral, embodied the noblest aspects of humanity. Courageous, enthusiastic, adventurous, beautiful, loving and protective, Rita - affectionately known by her film-industry peers as “Ricochet Rita” - lived a carefree life until she made one critical error: she fell in love with a guy named Longshot. A stuntwoman in Hollywood, Ricochet Rita was in the middle of shooting the film Raiders of the Lost Temple when she crossed paths with the mysterious Longshot, who came from an alternate dimension called the Mojoverse. Rita and Longshot bonded over their mutual taste for adventure and instantly became friends.

Unfortunately, Rita also became embroiled in the amnesiac Longshot’s former life - a life involving magic, slavery, alien races and idiotic reality TV shows. As it turned out, Longshot’s former slaver, Mojo, had sent several of his servants after him, including a six-armed, white-haired magician named Spiral. This squad of slave-hunters chased Longshot through a vortex that led to Earth, where they became stuck. Although the hunters managed to power their trip back home with some stolen diamonds, the things they had seen left an impression. Spiral informed her master, Mojo, about the bipedal, upright beings she saw on Earth - creatures uncannily similar to the monsters from the Mojoverse’s folklore. Both fascinated and horrified, Mojo insisted on traveling to the dimension of Earth to view them firsthand, as well as to capture Longshot before he returned to the Mojoverse and spread rumors of these free creatures to the Mojoverse’s bipedal slave race. 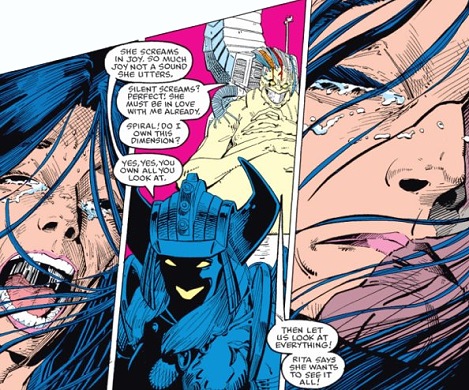 To trap Longshot, Mojo and Spiral took his friend Ricochet Rita hostage. They brought her back to the Mojoverse and made her into the figurehead of Mojo’s floating pirate ship, deliberately exposing her mind to the madness of the space between space. Rita went insane. As a cruel joke, Spiral and Mojo returned the catatonic Rita to her home, perhaps leaving her as a warning for Longshot. Fortunately, Longshot managed to revive her with the help of Doctor Strange. With her mind restored, Rita decided she enjoyed her taste of real-life adventure more than she did staged movie stunts. She enthusiastically teamed up with Longshot to halt Mojo’s plot to enslave the people of Earth. After defeating him, Rita accompanied Longshot back to the Mojoverse to help with his rebellion and further thwart Mojo’s nefarious schemes. [Longshot #1-6, X-Factor Annual #7]

At some point, Rita was recaptured by Mojo, tied to the prow of his ship and made into its figurehead. This time, however, she retained her sanity. 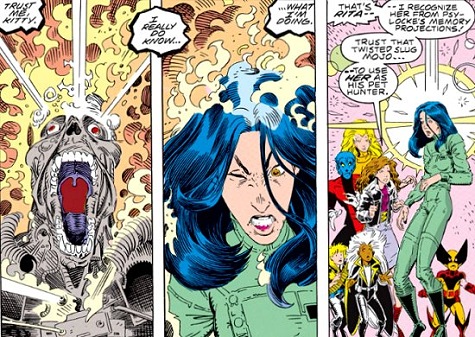 She managed to escape with the help of Mojo’s newest potential TV stars, the X-Babies. [Uncanny X-Men Annual #12]

Although the X-Babies made a clean getaway, Rita was apprehended by Mojo and transformed into a bounty hunter called “The Agent.” She pursued the X-Babies as per Mojo’s orders, but they captured her with Excalibur’s help and salvaged her personality with Mojo’s - in exchange for their own freedom. Rita felt so protective of them by that point, though, that she willingly followed them back to the Mojoverse, where she served as their manager. [Excalibur: Mojo Mayhem]

Time passed. At some point, Mojo turned on Rita, imprisoned her and tortured her. He once again opened her mind to “the time between time” and “the space between space” and taught her to dance between them as well. This exposure permanently twisted Rita’s mind and distorted her memories. She retained her feelings for Longshot - which were twisted into a grudge - but she forgot what she knew about Earth, possibly even that she was once one of its inhabitants. Her fascination with Earth would eventually compel her to ask Mojo for permission to spend time living there.

allowed her to practice more sophisticated magic spells, which she activated by dancing. A formidable magician as long as she has room to move her arms while she dances, Spiral’s magicks at one point earned her the attention of the Eye of Agomatto as a candidate for the new Sorcerer Supreme. [New Avengers #53]

However, Mojo had an ulterior motive with the addition of her arms. They made her a freak in the eyes of regular humans, which ensured she would hate humanity - a hatred Mojo could harness for his own destructive ends. Mojo even made a point of constantly reminding Spiral of how monstrous she appeared and how the humans of Earth would never accept her as one of their own, should she think of escaping. [Longshot #5-6] Mojo’s cruelest act of all was what

he made Spiral do next. He programmed her to timedance backward and attack her former self, Ricochet Rita, on Earth. She and Mojo opened Rita’s mind to insanity, just so she could escape, join Longshot in his doomed quest and fall prisoner to Mojo. Therefore, it was Ricochet Rita, in the form of Spiral, who initiated her own downfall and descent into insanity. Because she was under Mojo’s tight control and possibly brain-damaged, Spiral could only watch as she destroyed the life of the woman she used to be. [X-Factor Annual #7]

Because of the cross-dimensional nature of time-travel, it is unclear whether the Ricochet Rita from the 616-timeline and Spiral are in fact the same person. Adding to this uncertainty is Mojo’s infamous, albeit unproven, claim that only one Mojoverse dimension existed in the Multiverse. [Exiles (1st series) #18] If true, this would allow for paradoxical time-travel without creating divergent timelines. However, it still could have been an alternate-reality Rita whom Mojo and Spiral tortured and turned into the Spiral who frequents the 616-timeline. Perhaps a decision Spiral has made - or makes later in her life - will prevent Mojo from inflicting this fate on yet another Ricochet Rita. This article, however, will treat the 616-Rita and Spiral as one and the same. Regardless of where she originated, the Spiral whom the X-Men face is here to stay.