In the aftermath, Shiro Yoshida, the once-proud samurai, snuck away into the night to lick his wounds. Although his mind eventually cleared of Apocalypse's machinations, Sunfire's pride and his honor were hopelessly tarnished. Shiro sunk lower than he had ever fallen before and became a vagrant, living on the streets of Tokyo. He spent months drowning his sorrows in a bottle of sake, and lamenting the path of his life. After the death of Charles Xavier, Wolverine sought out Shiro in Japan and forced him to pick himself back up. He told Shiro how the Red Skull had desecrated the body of Xavier, stealing his telepathic brain, and offered Shiro a path for atonement. Sunfire, the Atomic Samurai was reborn. He left that alleyway to join the Avengers Unity Division in New York to work alongside the heroes of Earth in pursuit of Xavier's dream. [Uncanny Avengers (1st series) #5]

That pursuit proved arduous when the Apocalypse Twins, Uriel and Eimin, arrived to course-correct the fate of mutantkind. Sunfire was forced to face his dishonor as the descendants of 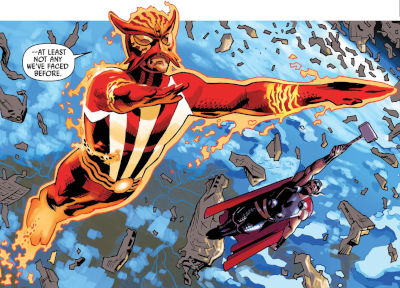 Apocalypse lay siege to Earth. Sunfire proved his valor by sacrificing himself to get Captain America safely off of SWORD's Peak station before it was struck by a Celestial ship, then aided Thor in saving Rio de Janeiro from the tons of debris raining down. The Apocalypse Twins came at the Unity Division in less direct ways as well, however, driving a wedge between the mutants and other members of the team. Sunfire joined Wolverine, Rogue and Thor in hunting down Clan Akkaba independently of their leaders, Havok and Captain America. [Uncanny Avengers (1st series) #7-9]

After finding the miniature galaxy from which the Apocalypse Twins were operating, the Avengers Unity Division were further separated. Sunfire and Rogue found Wolverine after he was tortured by his resurrected son Daken, one of the new Four Horsemen of Death. Logan warned them that the Apocalypse Twins had manipulated the Scarlet Witch into helping them “rapture” mutantkind 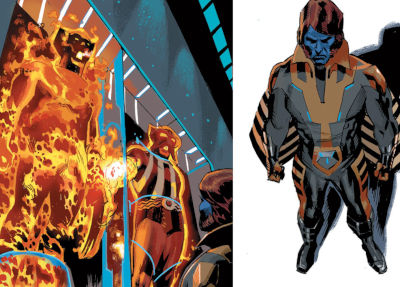 to their space ark, and Rogue was intent on killing Wanda before that happened. Unbeknownst to any of them, Wanda intended to summon the mutants of Earth as an army to oppose Uriel and Eimin. Sunfire separated Wonder Man from the Scarlet Witch as Rogue delivered a killing blow to Wanda, who nevertheless still enacted the rapture with the last of her strength. Unfortunately for her, the Apocalypse Twins were prepared and co-opted her hex spell, sending Sunfire and all the mutants into stasis instead of where Wanda intended. [Uncanny Avengers (1st series) #10-15]

Although Uriel was killed by Thor, the Apocalypse Twins' plan was successful, manipulating the Celestials into destroying Earth and using mutantkind to repopulate a new world as Planet X. Sunfire and Wolverine spent the next several years being tortured in secret by Eimin and her surviving Horsemen, until the surviving Unity Division members Havok and Wasp destroyed Eimin's tachyon dam, allowing Thor and Kang the Conqueror to arrive with reinforcements from the future. Logan and Shiro were freed and, with the help of his allies, Kang was able to transplant the minds of the Avengers back in time to before Wanda's death and Earth's destruction, in order to unite and try to change the sequence of events. [Uncanny Avengers (1st series) #19-20]

Naturally, Kang betrayed them. When Thor tore open the Celestial Executioner before it could destroy Earth, Kang seized the opportunity to absorb the cosmic energies released from the 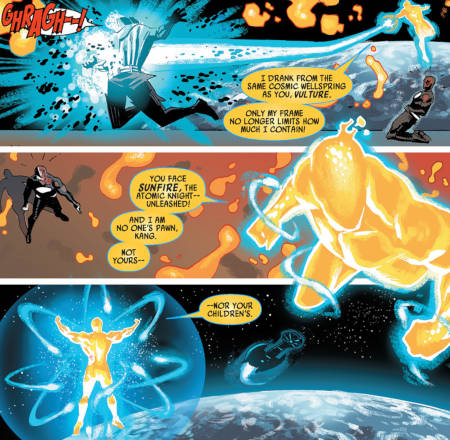 Celestial's armor for himself. Havok and Sunfire intervened in an effort to stop Kang from becoming all powerful, using their own mutant energy-absorbing abilities to draw the cosmic power into themselves. Kang stabbed Shiro in the back, using his temporal equipment to slow Alex from intervening. Sunfire seemingly exploded, leaving no trace of his body behind. In fact, the Celestial cosmic energy evolved the Atomic Knight to a new state of being. He quickly reorganized his dispersed energies back into a humanoid form and joined Havok in driving off Kang and destroying the Apocalypse Twins' ship. [Uncanny Avengers (1st series) #21-22]

After several weeks of recuperation, Sunfire was released from the Avengers' medical bay. His energy state was held together only by the tangible exo-frame of one of his old costumes, allowing him to interact with his physical environment but leaving no real substance to his body. [Uncanny Avengers (1st series) #23] With the loss of Wonder Man, the death of Wolverine, the unworthiness of Thor and the aging of Captain America, the Avengers Unity Division was on shaky ground. The attack of the Red Onslaught only drove the team further apart and Sunfire disassociated from the Avengers during this time period. He briefly associated with Serval Industries' X-Factor team, but did not remain with them for long. [All-New X-Factor #16-20]

Some months later, Shiro had regained his organic human form. He responded to Muir Island for the funeral of Jamie Madrox when it was learned the Terrigen Mists were toxic to mutantkind. Emma Frost rallied Shiro and several other X-Men and mutants to take an aggressive position against the Inhumans, knowing they would never agreed to contain the mists which were a part of their sacred culture. With two Terrigen clouds circling the globe, the X-Men hatched a scheme to have the mutant named Alchemy alter the elemental composition of the cloud, rendering it harmless to mutants.

While the Inhumans' royal expedition team was contained by Magneto and other mutants, Sunfire and another group prepared to assault the mist cloud outside of Madrid, Spain.  Alchemy's power required physical contact to work, and so a risky plan was made for Sunfire to carry Alchemy high 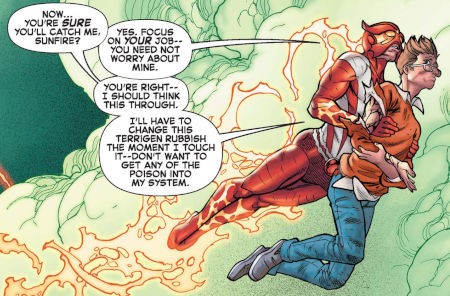 off the ground and drop him into the cloud, then catch him as he fell through the bottom. The hope was that Alchemy could change the Terrigen's elemental structure faster than it could affect him. Alchemy succeeded in neutralizing the Terrigen cloud and Sunfire caught him, but the boy was unable to avoid the dangerous effects of the Terrigen as he passed through it. Alchemy died in Shiro's care, mere moments after they returned to the ground. [Death of X #2-4]

The actions of Emma's group painted them as rogues in the eyes of the world thanks to an Inhumans public relations offensive, and the second Terrigen cloud continued its travels across the Earth's surface. Shiro gathered as many mutants of Asia as he could manage, hoping to bring them to the X-Men's haven in Limbo for protection. Their vessel was driven off course, however, winding up in the extra-dimensional Weirdworld. Sunfire kept his people together until a rescue team of X-Men arrived and relocated to X-Haven. [Extraordinary X-Men #6-7] When the threat of worldwide Terrigen saturation of the atmosphere struck, Sunfire and the X-Men openly opposed the Inhumans again in order to eliminate the remaining Terrigen cloud. [IVX #1-2]

After Hydra took over the United States, Steve Rogers ceded land on the west coast to a mutant nation of New Tian. Sunfire was among the associate X-Men who patrolled and defended New Tian, while the main team was trapped behind the Darkforce barrier in Manhattan. [Secret Warriors (2nd series) #3-4] Sunfire remains a loyal ally of the X-Men and the mutant community, yet always a step apart due to his arrogance and patriotism towards Japan.