• Selective mass-shifter able to proportionately shrink in size, either displacing her mass extra-dimensionally or compressing it into her smaller frame to gain increased levels of strength and density

Kristina Anderson and her brother, Kris, grew up in Detroit. At some point, they developed mutant powers that gave both rather unfortunate appearances. Kristina developed the ability to shrink her body, while increasing her density, but at her apparently regular height she would only come up to 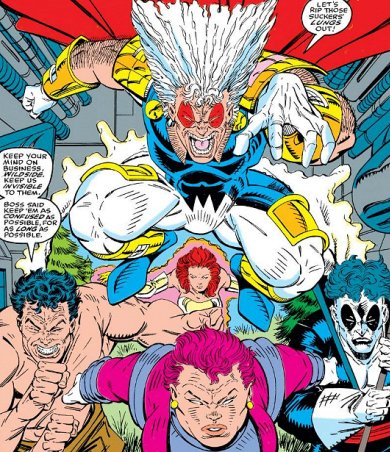 other peoples’ knees. Her brother gained the ability to increase his size,  gaining strength, but also a brutish appearance. Possibly due to their outward mutations, they both joined up with villainous mutant organizations. Taking the name Thumbelina, Kristina became a member of the original Mutant Liberation Front (MLF), a terrorist faction working under the orders of the mysterious mutant called Stryfe. [X-Factor (1st series) #77, New Mutants (1st series) #86]

The Mutant Liberation Front made its public debut with Thumbelina as part of the field team. Their mission was to blow up a major federal energy research facility in Wyoming, which they succeeded in doing. Their goal was to get media attention to the injustice that had been done to the imprisoned New Mutants, Rusty and Skids. The young mutants in the MLF quickly went on to more terrorist acts, invading a secret energy research station. When they encountered some security guards, Thumbelina’s teammates were of more use than she was in taking them down. Thumbelina had a problem with the time-warping that her teammate Tempo used in combat, as it tired her out. This caused her to be bullied by her teammates. 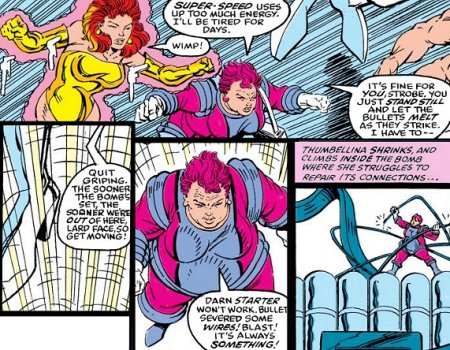 Nevertheless, she did prove useful on the mission, as the bomb was damaged by a stray bullet and Thumbelina was able to shrink down and climb inside the device, repairing the wires. She returned to her default size and escaped the energy research facility before the MLF could be stopped by the mysterious Cable. Days later, the terrorists once again succeeded in blowing up another facility. Upon returning to their headquarters, the MLF was promptly sent to liberate Rusty and Skids by their leader Stryfe, save for Thumbelina, who was ordered to remain behind due to her tiredness. [New Mutants (1st series) #86-87]

Although the Mutant Liberation Front continued to commit many public acts of terrorism, Thumbelina was rarely seen with them. Presumably, she was not used for field operations because she was unsuited for physical confrontations. Nevertheless, Stryfe utilized her in other ways, such as a contact for the teleporter Zero when the field teams were on missions. [X-Force (1st series) #1]

When the MLF learned that two of the Nasty Boys, including Thumbelina’s brother, Slab, had been captured and incarcerated in a government holding facility, Thumbelina accompanied her teammates on a rescue mission. While they battled the facility guards, Thumbelina ran off to find 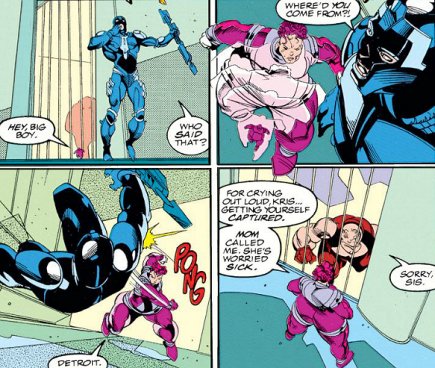 Slab and was rather fortunate that she wasn’t present when X-Factor arrived to intercept the terrorists. Thumbelina was able to sneak up on the guard who was keeping watch over Slab, by decreasing her size, then returning to her default size with enough force to punch the guard out. Kristina then told her brother that their mom called and was worried sick. The mission accomplished, Thumbelina and her teammates managed to escape with Slab and Hairbag, though not without a close call when X-Factor almost captured Stryfe. [X-Factor (1st series) #77]

During her time with the MLF, Thumbelina, possibly due to her awkward appearance and rarely going on field missions, struggled to make friends. By her own account, the only friend she did make was Dragoness, though Dragoness herself never confirmed this and, considering Dragoness’ haughty attitude, it might have been somewhat wishful thinking. When the MLF became involved in a deadly attack by the combined forces of the X-teams, Thumbelina and her brother, who was hanging around with the MLF since his rescue, were forced into battle. When Dragoness was taken down right in front of her, Thumbelina was worried for her friend and refused to leave, even when urged by Slab to escape with him. Reminded that their mom hates it when he doesn’t keep an eye on her, Slab lingered too long and the two were captured in ice by Iceman, who called them “feebs” without Stryfe to coordinate them. [X-Men (1st series) #15] 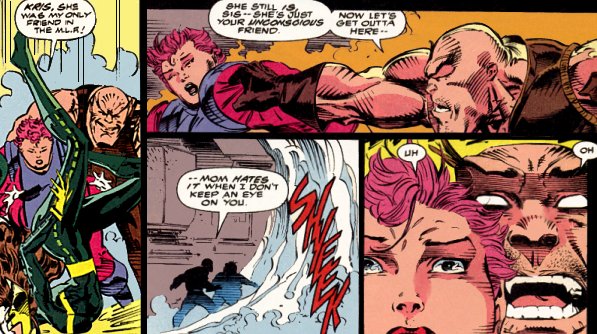 Following the battle, the Mutant Liberation Front members were taken into custody. Although most members of the MLF have appeared in various capacities since the fall of the original team, Thumbelina has not. Her brother Slab returned to the Nasty Boys, but no mention has been made of Thumbelina's fate. It also remains unknown whether Thumbelina retained her powers following M-Day.

A future version of Thumbelina from a possible alternate timeline briefly came to the present time during an encounter with the Skornn. This alternate Thumbelina looked strikingly like Thumbelina did when she was active with the MLF. Given the ever-changing landscape of the mutant community, this unfortunate mutant could make a surprise return at any time.