Most of the early life of Carmella Unuscione is unknown, though it seems she grew up in Italy. Her family is likewise unclear but, given her name and powers, it is possible she is either the daughter or sister of mutant criminal Unus the Untouchable. If true, this would also make her the half-sister or aunt to Unus' illegitimate son, Radius. At some point, Carmella's mutant power manifested itself and she joined the Acolytes, a group of mutants who blindly dedicated themselves to following the teachings of Magneto.

On her first known mission with the Acolytes, Unuscione was part of a team sent to Switzerland to investigate rumors of a mutant boy who lived alone on a mountain. They found the youth in a church and it took some time before they were able to draw him out. Desperate for someone to believe in, Unuscione and her fellow Acolytes indoctrinated the youth into their ranks, at which point the boy became known as Neophyte. [Uncanny X-Men (1st series) #315]

When the Acolytes learned a mutant was possibly residing in the Our Mother of the Sacred Heart School in New York, Unuscione was among the group sent to investigate. The investigation quickly turned into an attack and Unuscione scolded the Kleinstock brothers for the way they recklessly created an explosion, fearing for the safety of “the gifted one” for whom they had come. She also warned the Klesintocks that they would answer to Cortez, their new leader, for their 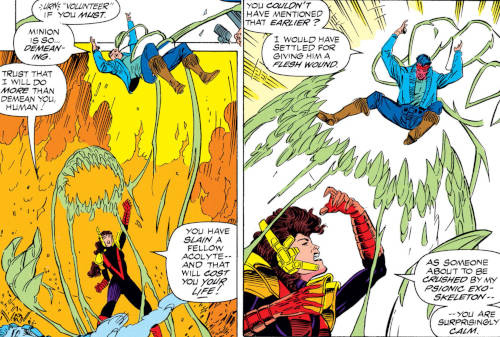 actions. When one of the Kleinstocks attacked a bus, Carmella ordered him to stand down. Unfortunately for him, he didn't listen and was blown apart by Tom Corsi, the bus driver. Unuscione responded by using her exoskeleton to grab Corsi and threatened to destroy him for killing her teammate.

When the X-Men arrived on scene and attacked the Acolytes, Unuscione took a moment from the fight to complete her mission. She firmly believed that she and her teammates needed to increase their numbers for the “sacred war” to come. After using her psionic exoskeleton to “divine” which child was the mutant, she plucked the mutant boy from the school bus. However, when she found him, Unuscione discovered that the boy was not a mutant at all – he had Down's Syndrome. Unuscione tossed the boy back to the other children and instructed the surviving Kleinstock brother to “purify” them. With the X-Men distracted by trying to save the children from the explosion, Unuscione and the rest of the Acolytes escaped. [Uncanny X-Men (1st series) #298]

Less than a week later, Unuscione found herself battling Archangel and Colossus when the X-Men were led to the Acolytes' base by Neophyte, who had betrayed his teammates after learning Cortez was responsible for Magneto's death. Unuscione was aggressive in the battle, but Colossus overpowered her and knocked her out. She never knew how close she came to dying just then as Colossus debated with himself whether he should show Unuscione the same mercy she showed the children at the school earlier in the week. [Uncanny X-Men (1st series) #300] 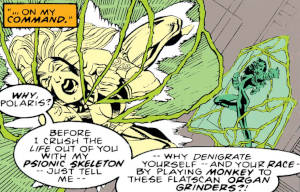 When the Acolytes attempted to capture Quicksilver, the son of Magneto, Unuscione was part of the group that confronted X-Factor. As she attempted to crush Polaris with her exoskeleton, Unuscione asked her why she played monkey to “flatscan” organ-grinders. Fortunately for Polaris, the experienced hero was able to repel Unuscione's attack. Afterward, the Acolyte retreated with her teammates when the battle ended. [X-Factor (1st series) #92]

Shortly afterwards, the Acolytes learned the truth about Magneto's death. Not only was their leader actually alive but that Cortez had attempted to kill him. Unuscione and several of her teammates launched an attack on Cortez, but he fought them off. She then joined the other Acolytes in following Exodus, who led them to join Magneto. Now in his full power as leader of the Acolytes, Magneto and his followers appeared at the funeral of Illyana Rasputin, offering salvation to any who wished to join him. Unuscione witnessed as Colossus accepted and returned with Magneto and his followers to Avalon. [Uncanny X-Men (1st series) #304]

When Colossus received word from his old flame Shadowcat that she was interested in joining the Acolytes, he journeyed to Muir Island, accompanied by Unuscione, Voght and Katu. In fact, the overture had been a trick to lure Colossus to the home of Excalibur, intending to force an intervention. When the argument led to battle, Unuscione announced that she had been waiting for a long time to battle Rachel Summers in psionic combat. Unfortunately for her, the fierce Acolyte's powers were no match for Rachel's, and Unuscione was easily defeated. The battle ended when Colossus convinced the heroes that his conversion was genuine and he returned with his new teammates back to Avalon. [Excalibur (1st series) #71]

Unusione joined Voght, Katu and Milan on a mission in London, where they were searching for Omega Red. To Unuscione's disgust, they trudged through the underground sewer system, where they found humans, drained of their life-force, fed upon by Omega Red. When they located the powerful villain, they informed him that they had found a way for him to feed without taking 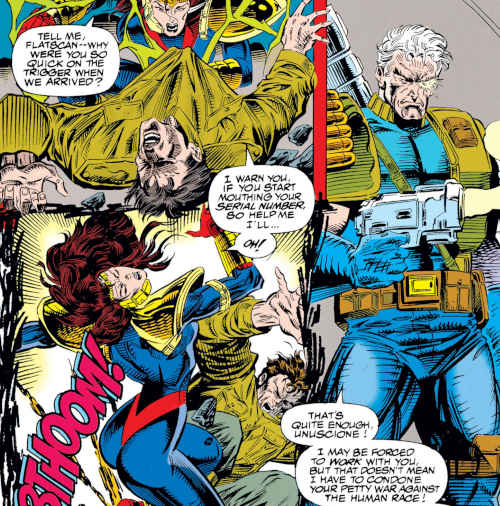 innocent lives. In return, they wanted him to join their cause. However, after Omega Red learned how the cure worked, he ditched the Acolytes for Muir Isle, where he stole items he needed for the cure. Unuscione and her teammates arrived at Muir Isle once again, where they found Cable, who agreed to work with the Acolytes to find Omega Red. They ventured to a base in Tyuratam, where the Acolytes were set upon by soldiers. Unuscione attacked one of them but, before she could harm him, Cable knocked her aside, not interested in the Acolytes' war against the human race.

Just as they closed in on Omega Red, Cable realized too late it was a trap. The Acolytes had already captured Omega Red and they now had Cable surrounded. As their base of Avalon was 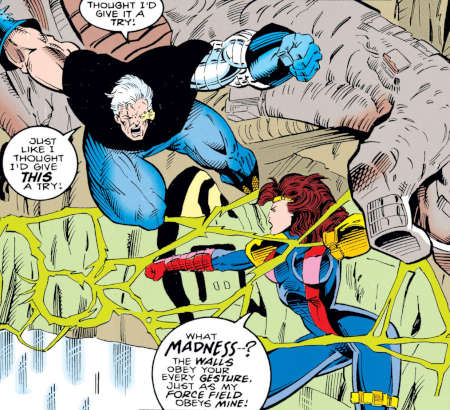 mostly composed of pieces from Cable's old station, Graymalkin, they needed Cable to unlock its secrets. As the rest of the Acolytes chased Cable through the base at Tyuratam, Unuscione was partnered with the Kleinstock Brothers. Although outnumbered, Cable’s tactics overcame Acolyte after Acolyte. Unuscione herself went one-on-one with Cable, but fell to psychic feedback. In the end, Omega Red escaped and Colossus called off the mission, allowing Cable to depart in peace. [Cable (1st series) #9-11]

When the Acolytes captured the traitor, Neophyte, a trial was convened. Exodus would serve as 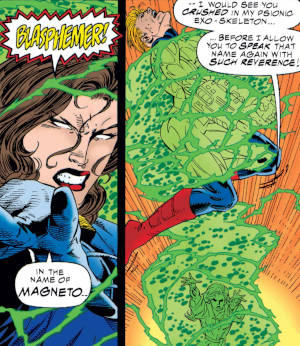 judge, with Colossus defending Neophyte, Voght acting as prosecutor and Unuscione and the rest of the Acolytes as witnesses to the trial. Still bitter about his betrayal, Unuscione believed that the “trial” was more than the boy she once rescued deserved. As the trial progressed, Unuscione became upset with Voght's prosecution skills and felt that it was as if the Acolytes were on trial, not Neophyte. When Neophyte revealed that he had spoken with Charles Xavier

Unuscione decided she had had enough and lashed out at the boy, trapping him in her exo-skeleton and threatening to crush him. Colossus tried to persuade Unuscione to free the boy, but it was Voght who finally intervened and teleported him to safety. Neophyte was later expelled from Avalon, a verdict almost certainly too lenient for Unuscione. [Uncanny X-Men (1st series) #315]

Unuscione was present with the other Acolytes when they were introduced to the unconscious being that Exodus brought aboard Avalon. It was soon discovered that this was Holocaust, a refugee from an alternate reality. Once revived, Holocaust launched an attack on Exodus, believing him to be an enemy from his native reality. The battle between the two powerful mutants took its toll on Avalon and the station soon began to break apart. When Voght teleported Cyclops 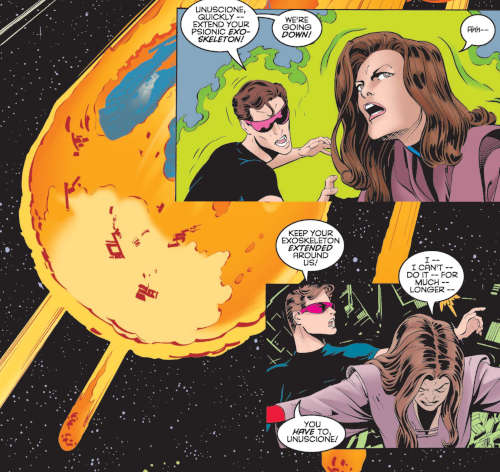 and Jean Grey to Avalon to assist, Unuscione lashed out at the two X-Men, rather than Holocaust, accusing them of bringing the monster to them. Nevertheless, as the space station broke up around them, Unuscione found herself having to work alongside Cyclops as he led her, Cargill, Scanner and the Kleinstock Brothers to find safety. When it was discovered that all of the escape pods were destroyed, Carmella followed Cyclops' instructions when he instructed her to extend her exoskeleton around them all, as the portion of Avalon they were on started to plummet towards the Earth. She was able to do so, though it caused immense strain on her, pushing her powers further than she had ever done before.

Unuscione, Cyclops and the other four Acolytes survived the fall from space and found themselves in the Australian Outback. As usual, the Kleinstock Brothers irritated Carmella as they accused her of work cooperatively with Cyclops. Despite her earlier feelings toward the X-Men, Unuscione defended Cyclops, pointing out that with Magneto and Exodus gone and the Acolytes no longer existing, why should the X-Man be their enemy? Eventually, they arrived at the outpost where the X-Men once resided. Now safe and with nowhere else to go, Unuscione and the other four Acolytes were prepared to turn themselves in. [X-Men (2nd series) #42-44]