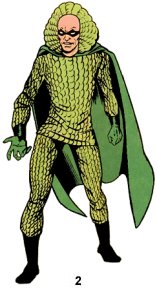 1) The Vanisher premiered as a super-villain wearing a red shirt and pants made of scaled fabric with a matching, egg-shaped cowl of the same texture. Over this, he wore full-length purple cape with black gloves and boots, and a black burglar's mask over his eyes. The front of his shirt sported a black emblem resembling a serpent. [X-Men (1st series) #2]

2) Telford wore several variants of this outfit, most notably one in all green. Some of these outfits dropped the black serpent symbol on the chest, while others kept it. [X-Men (1st series) #37]

3) After being exposed to the Darkforce by Darkstar, the Vanisher created an all-black bodysuit for himself, reminiscent of a classic cat burglar's outfit. He later revisited this look when working with the Beat Street Gang and the New Enforcers. [Bizarre Adventures #27]

4) During his time as the leader of the Beat Street Gang, likely a reflection of his opulent lifestyle living off the labor of exploited teenagers, the Vanisher donned a loud, garish outfit: a purple sport coat with a teal geometric pattern print, a patterned pink button-up shirt with a popped collar, a skinny tie, blue jeans and sneakers. He topped off this flamboyant look with a pair of visor sunglasses. [Fallen Angels (1st series) #2]

–) When he took a trip to another dimension, the Vanisher reverted to an all-red variant of his classic first look. 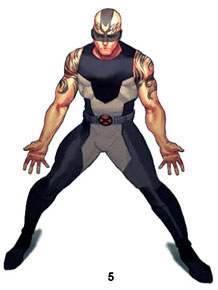 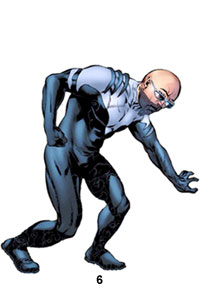 5) While a compulsory member of X-Force, the Vanisher adopted a sleek, streamlined look similar to theirs. He wore a sleeveless bodysuit comprised of dark grey highlighted by a lighter shade of grey on the torso and inner thighs. Over this, he wore a black utility belt with a red X belt buckle. Most notable about this look, however, were the tribal tattoos the Vanisher now sported on his face and arms. Whereas he used to wear a cat burglar's mask over his eyes, he now had a dark band tattooed over them and around the back of his head, along with black tattoos resembling stylized flames on his face, head and arms. [X-Force (1st series) #9]

6) After his apparent return from the dead, the Vanisher wore another black bodysuit, only with a grey, V-shaped pattern over the chest and shoulders, and a series of three black, parallel slash marks longitudinally over each shoulder. A faint pattern of wispy swirls overlaid this costume's black fabric. While wearing this outfit, the Vanisher no longer had tattoos on his head, although he still covered his eyes with sunglasses. [Astonishing X-Men (3rd series) #48]

7) As part of S.W.O.R.D, Vanisher wears a practical jacket and jumpsuit marking him as a member of the Teleport Team. The outfit is black and orange, color-coordinated for the Logistics division of S.W.O.R.D. [S.W.O.R.D. (2nd series) #1]