Chapter 1 - Snake in the Grass

At one point, it was believed that Viper was a literal “agent of chaos.” During a time when Jessica Drew, Spider-Woman, was interfering with Viper’s operations, several people noted the remarkable similarity between the two women. In her private thoughts, Viper repeatedly lamented on how much she loved Jessica, even while outwardly demanding her death. The “truth” came out that Viper was Meriem Drew, Jessica’s mother. She was possessed 50 years earlier on Mount Wundagore by the Elder God known as Chthon, who wanted to free himself from his Earthly prison through her. He failed, but continued to employ Meriem as his puppet, a force for chaos on Earth. Meriem’s aging process was stopped by Chthon and she was forced to carry out his bidding while still retaining a sliver of true humanity in the back of her mind. Viper and Spider-Woman managed to confront Chthon and supposedly freed Viper from his control. Although Viper claimed Meriem Drew was dead, and she could never again be who she once was, they parted on loving terms. [Spider-Woman (1st series) #44]

Unfortunately, the whole scenario was a fabrication. Morgan le Fay, Spider-Woman’s arch-nemesis, psychically manipulated Viper to create the illusion of her being Meriem Drew, and falsified Chthon’s involvement as well. The entire ordeal was a plot to give Jessica what she wanted, a chance to reunite with her mother, and then rip it away at the moment it would hurt her worst. When an opium session prematurely shattered the false memories in her mind, the Viper was furious. She blamed Spider-Woman for manipulating her mind and attempted to kill her, with no remorse or residual “mother’s love” holding her back. [Captain America (1st series) #281]

In reality, the girl who would become Viper was one of the Kraken’s chosen pupils. The Kraken was a legendary HYDRA agent, seldom seen in public endeavors. Instead, he concentrated on recruitment, locating or creating the best possible assets for the organization. Decades ago, the Kraken recruited nearly a hundred orphaned girls, breaking them into eight training houses. They competed with one another, showing their skills, ambition and ruthlessness, until only one girl remained. That girl became the Viper. [Secret Warriors #15] 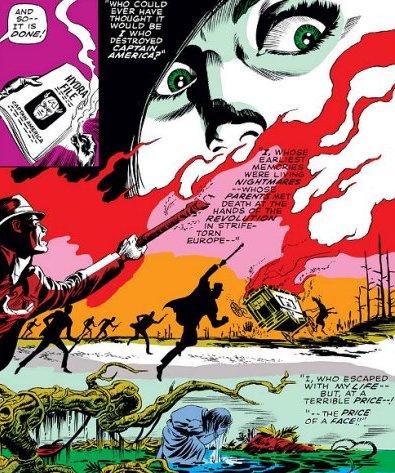 The Viper was already well versed in survival tactics before entering the Kraken’s house. A war orphan who survived her parents’ murder during an unnamed revolution in Europe, the future Viper was permanently scarred on the right side of her face by the ordeal (at least, according to some accounts). She survived the war-torn streets of her homeland as a petty criminal until found by the Kraken. [Captain America (1st series) #113]

Although the Viper was chosen by the Kraken for that role, she did not openly assume the name “Viper” for many years. Instead, she became one of several women who were appointed the rank of Madame Hydra. To the uninitiated, even to the rank-and-file of HYDRA itself, she was indistinguishable from the other women who assumed the role. And when she abandoned HYDRA, killing a minor criminal called the Viper so that she could assume his alias, it appeared as if she was breaking all ties with the group. In fact, Viper was part of a secret order at the core of HYDRA with Baron Strucker, the Kraken and others. The many arms of HYDRA spread further than their enemies or the public was aware. The Viper remained secretly loyal to the true HYDRA, waiting for the proper time to rise up and rule. [Secret Warriors #2]

This secret agenda makes it difficult to identify the true reasons behind some of Viper’s motives over the years. Many times, she seemingly crossed the line from ruthlessness to outright lunacy: at times, even the Red Skull thought she went too far. Her more insane nihilistic tendencies may have been an act, however; a deliberate and Nietzschean effort to cull the weak from the strong, keeping with Baron Strucker’s vision for HYDRA. In a private moment, Viper admitted her marriage to Wolverine was in the service of HYDRA’s secret order, and her genuine love for the Silver Samurai remained unfulfilled for the same reasons. Another factor may have been the influence of the Serpent Crown, conduit for the power of the Elder God, Set, which is known to have a lasting effect on the minds of men and women. Only after exposure to the Crown did Viper begin calling for “serpent supremacy” and acts of destruction seemingly for their own sake. (It is interesting that Viper was tied, however briefly, to both of the exiled Elder Gods, Set and Chthon.)

To make the situation even more difficult to understand, Viper also employed body doubles for herself in later years, called Pit-Vipers. Like the many Madames of Hydra, or the Doombots of Victor von Doom, Viper used surgically altered subordinates to appear in her place on several occasions. And, just like Doctor Doom’s Doombots, which appearances of the Viper were actually Pit-Vipers was often left up to the reader’s imagination.

One last curiosity about Viper is the appearance of her alleged facial scars. These scars were a signature element of Viper’s character, and at times they were even used as a way to distinguish the fake Pit-Vipers from the real deal. But while the scars were referenced as early as Captain America (1st series) #113, they were not actually shown until Silver Sable & the Wild Pack #15, in 1993. In fact, as far as our research can show, Viper’s scars were actually shown in that issue ONLY… never before and never since. On multiple occasions, far more than can be hand-waved as Pit-Vipers, Viper has appeared without scars at all. Frankly, the extreme rarity of times when Viper’s scars have actually been shown suggests they were never real, but rather a deliberate ploy on her part for some reason.