In her public debut as Madame Hydra, the future Viper orchestrated a daring scheme to contaminate the water supply of Manhattan. After the then-recent death of Baron Strucker, Madame Hydra seized power within the organization for herself, eliminating an entire sector of HYDRA officers to become Supreme Hydra of that faction. Her schemes were opposed by Captain America and Rick Jones, who had recently assumed the identity of Bucky. In response, Madame Hydra attempted to assassinate Captain America on several occasions, but only succeeded in capturing Bucky in his place. When Bucky escaped, Madame Hydra chased him to the scene of a battle between Captain America and a HYDRA Mankiller robot. A spray of bullets seemingly killed Cap as he fell into the river, leaving HYDRA victorious. [Captain America (1st series) #110-111]

Not satisfied to rest on her laurels, Madame Hydra staged a gas attack at Captain America’s wake, capturing Nick Fury and the Avengers in the name of HYDRA. She intended to bury them alive at Drearcliff Cemetery, but was shocked by the sudden reappearance of Captain America, who had faked his earlier demise. The hordes of HYDRA failed to stop Cap and Bucky from rescuing the Avengers. On the verge of defeat, Madame Hydra launched a volley of hunter missiles at the heroes, only to be caught in the explosion when the missiles veered back in her direction. [Captain America (1st series) #113]

Madame Hydra was presumed dead in the blast, but not only was she not dead… she wasn’t Madame Hydra. The form-stealing Space Phantom replaced Madame Hydra during the battle at the cemetery, banishing her into Limbo. After Madame Hydra’s apparent death, the Space Phantom continued impersonating a series of HYDRA commanders on his way to the top of the organization, while the real Madame Hydra was left to fend for herself when she rematerialized back on Earth after the Phantom was done using her form. [Avengers (1st series) #107] 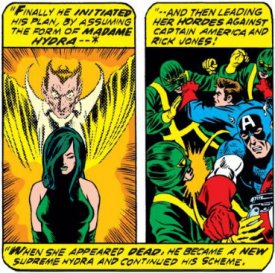 On the outs with HYDRA after her apparent death and the Space Phantom’s manipulations, Madame Hydra was sought out by Warlord Krang of Atlantis, who had a vision of her after donning the lost Serpent Crown of Lemuria. The two of them coordinated a scheme to raise Lemuria to the surface, causing havoc for air-breathers and water-breathers alike. To begin their efforts, Madame Hydra intercepted U.S. Marshals transporting the super-criminal known as the Viper. She informed the Viper of her intent to assume that name for herself, and then murdered him in cold blood to cement her claim to the name. The new Viper freed the original’s comrades the Eel and the Cobra who, along with Viper, Princess Python, and Krang, comprised the new Serpent Squad. As the Squad organized, Viper told Eel (the original Viper’s brother) that he was killed by “the forces of order” and she assumed his alias as a memorial to their fallen serpent brother.

Viper led the Serpent Squad on a mission to kidnap Hugh Jones, head of RoXXon Oil. Despite the intervention of Captain America in his new, non-patriotic identity of Nomad, the Squad succeeded in capturing their prey. Krang then used the power of the Serpent Crown to place Jones under the mental domination of Set. With Jones’s unwilling help, the Serpent Squad travelled to a RoXXon drilling rig and planned to manipulate the machinery to force Lemuria to the surface. Their efforts failed, but Viper and Cobra escaped with the Serpent Crown. 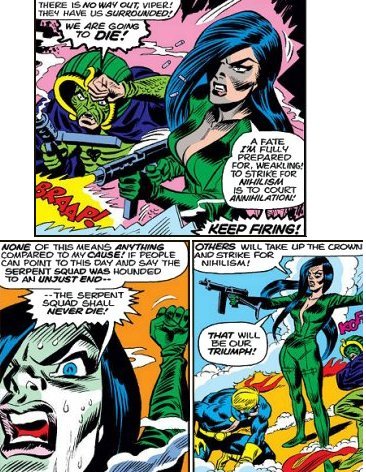 The duo didn’t get away clean, though. Viper and Cobra were spotted returning to their base of operations, and got into a shootout with the local police who boxed them in. The Viper’s increasingly erratic behavior began to unnerve Cobra, as she was clearly willing to die in the firefight for the greater glory of Set and her own nihilistic tendencies. When Nomad defenestrated the residence, Viper went completely ‘round the bend. She planned to kill herself and Cobra, provided they could take Nomad with them, as martyrs to the cause of chaos. As police tear gas began to fill the house, and an explosion in the cellar set the house aflame, Cobra attempted to flee from the madwoman with whom he had regrettably aligned himself. Viper shot him in the back for his cowardice, just before the house collapsed on top of her. Nomad pulled the injured Cobra to safety, but the Viper was lost inside the inferno. [Captain America (1st series) #180-182]