Although she was forced into exile, Viper did not immediately abandon Madripoor. She retained a secret HYDRA base on the island for a time after the Skrull invasion. This gave her the opportunity to confront Jessica Drew when she came to Madripoor looking for Skrull refugees. [Spider-Woman: Agent of S.W.O.R.D. #2-4] Viper also attempted to regain footing in the country during a deal with the Facility. Their agent Kimura planned to sell Viper the monstrous metallic hunters called Predator X. Previously engineered only to hunt mutants, Kimura offered Viper the means to adapt the Predators to hunt any genetic sample she provided. This deal was interrupted by Wolverine and the Punisher, who joined forces with Tyger Tiger to drive Viper from Madripoor. After the Tiger stabbed Viper, they threatened to use some of her blood for the Predator X catalyst, turning the nigh-unstoppable creatures against Viper. Outmaneuvered, Viper vowed to leave Madripoor if Logan and his friends destroyed the catalyst. [Astonishing Tales (2nd series) #1-6] 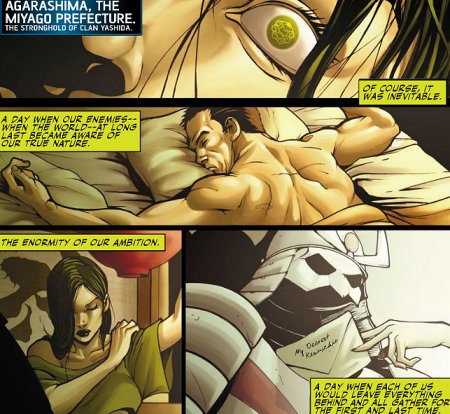 Not long after, the secret order of HYDRA decided to Wake the Beast and reveal itself to the world. Baron Strucker orchestrated HYDRA’s rise after learning Nick Fury had uncovered the secret connection between HYDRA and his old organization, S.H.I.E.L.D. The word went out for the HYDRA elite to gather at their secret holy site in New Zealand, the Gehenna base. Viper left Kenuichio in the middle of the night to join with Strucker, the Kraken, Hive, Gorgon and a new Madame Hydra as the ruling council. They planned to engineer open warfare against Fury, HAMMER and the free nations of the world.

To that end, Viper and Madame Hydra used her connections to Clan Yashida to betray Kenuichio and his people. HYDRA kidnapped the wives and children of Clan Yashida in order to force them into dedicating their resources to the Typhon Group, HYDRA’s public corporate face. They also demanded the contents of the box, a secret totem of the ancient world guarded as a sacred trust by Clan Yashida. A generation prior, the Grandmaster of the Hand begged a favor of Shingen Yashida to hide a Renaissance tech power source inside the box, the day before he was killed by the forces of Leviathan. Kenuichio considered it the highest dishonor to part with the box before his own death, but was forced into the agreement to save the Clan families Viper held hostage. Although she honestly loved Kenuichio as she loved no one else in the world, Viper reluctantly stayed loyal to HYDRA’s ideals and allowed Kenuichio to believe their entire relationship was a long con to one day lay claim to the box. [Secret Warriors #2-6]

As HYDRA prepared for conquest, Viper oversaw the construction of their new dreadnaught ships at the Nemesis, a docking facility a stone’s throw away from Madripoor. One night, however, HYDRA was attacked by the lingering forces of Leviathan. Tipped off about the Renaissance tech, Leviathan traced the box from the Silver Samurai to Viper, and kidnapped her from Nemesis. Leviathan was once the covert intelligence arm of the Soviet Union, and the Renaissance tech was the key to unlocking the Leviathan army from suspended animation, where they had slept for over a decade. Leviathan’s commander Magadan was unable to extract the location of the box from Viper’s mind, but fortunately Leviathan had an agent secretly placed inside HYDRA. Madame Hydra arrived at the Long Winter facility in Siberia with the box, revealing herself not only as a Leviathan agent but also as the long time S.H.I.E.L.D. operative Contessa Valentina de Fontaine. As Viper stared in disbelief, the Contessa shot her several time through the chest, killing her. [Secret Warriors #11-14] 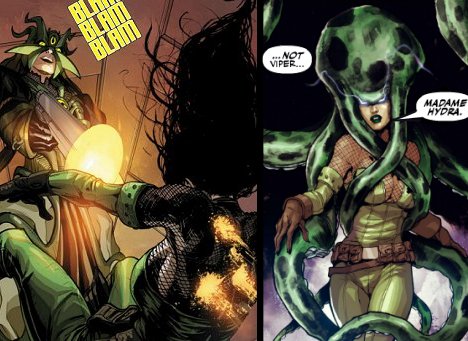 Although dead, Viper’s saga continued. HYDRA found her body at Long Winter, and the parasitic entity known as the Hive succeeded in somehow resurrecting Viper with his spawn. The creatures interacted with Viper’s physiology, jump-starting her body while producing a symbiotic, octopus-like growth that expanded over her head and supported her health. In this new state, Viper once again adopted the fitting name of Madame Hydra. [Secret Warriors #15]

HYDRA and Leviathan confronted each other at The Crown in Kyoto, Japan, and the two organizations quickly came to blows over territory and power. [Secret Warriors #16] The war between the two groups escalated rapidly, leading to the death of Magadan and the destruction of a major portion of Seattle, as well as other HYDRA and Leviathan assets worldwide. Nick Fury and his commandoes attempted to bring down the two groups through a series of strikes. During an infiltration at Gehenna, however, Fury failed to escape quickly and was forced to face Madame Hydra and Strucker’s inner council directly in combat. Two of Fury’s commandoes were killed, but not until a mountain-buster was set off in Gehenna, devastating HYDRA’s main base of operations. Madame Hydra and Gorgon abandoned Strucker at this point. They took four legions of HYDRA’s shock troopers with them and left the Baron to continue his personal war with Nick Fury until it led to his death. [Secret Warriors #20-22]

Madame Hydra and Gorgon resurfaced as part of an enclave of various organizations, initially gathered by Norman Osborn and his Goblin Cult. Factions of HYDRA, A.I.M., the Hand and H.A.M.M.E.R. united under Osborn’s control in order to strike back at the Avengers and claim their place on the world stage. Secretly, Madame Hydra expected Osborn to fail from the beginning – she used the alliance as a convenience to bring together various resources at her disposal. Thanks to Superia and Caroline Washington of H.A.M.M.E.R., Madame Hydra was able to disconnect from the Hive parasite animating her body and resume her original appearance. As Gorgon played the part of Wolverine in Osborn’s new Dark Avengers, the Viper patiently stood by waiting for her chance to seize power. 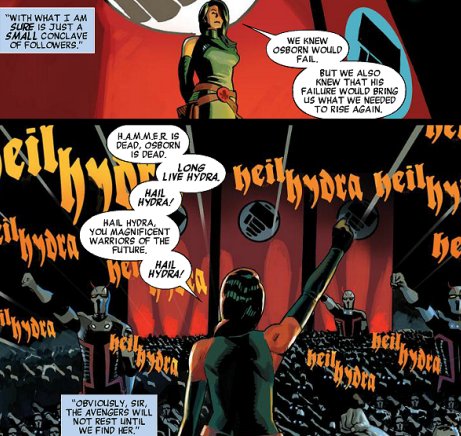 Osborn’s scheme succeeded in temporarily destabilizing the Avengers, attacking them both physically and in the public eye. Viper was particularly pleased when the forces of H.A.M.M.E.R. captured her old nemesis Captain America, and she busied herself torturing him for a time. Osborn’s scheme even reached the point where his coalition made demands of the President of the United States. Viper personally delivered the message along with a battalion of enhanced HYDRA troopers, as Osborn attempted to reclaim global authority for him and his followers. As Viper anticipated, however, the scheme eventually began to unravel, as the captured Avengers freed themselves and began dismantling the united forces of evil. With Osborn, Gorgon and their Dark Avengers captured by the authorities, Viper was free to repurpose everything that remained into a new power base for HYDRA, with none to question her authority. [Revenge of H.A.M.M.E.R. ]