Chapter 3 - Sword of the Samurai

Miraculously, Viper survived the house’s destruction, as the floor gave way beneath her feet when the ceiling collapsed. In the fall, she was separated from the Serpent Crown and its influence. Her escape from the area was aided by Ishiro Tagara of the Japanese Red Army, who received word of the shoot-out and was looking to acquire Viper’s services. Over the next few months, she recuperated at Tagara’s Japanese estate while planning her next strike against America. Tagara provided Viper with the services of his ally, the Silver Samurai, and together they constructed a teleportation ring for easy travel. Next, Viper and Silver Samurai field tested a hypno-beam that allowed them to gain access to a SHIELD base and the schematics of the Helicarrier. Thanks to the teleportation ring, they then infiltrated the Helicarrier’s sick bay and planted a portable hypno-beam projector in the staff doctor’s office. By snaring the doctor’s will, they soon spread their influence throughout the Helicarrier and seized control of the entire crew.

Viper planned to use the Helicarrier for a kamikaze strike on Congress during the president’s televised speech, eliminating the American government with a single blow. Her plan was not without delays, however. The Black Widow was investigating the earlier break-in at SHIELD’s New York base and came across Viper’s plot. She was captured and interrogated for days, but eventually broke free, bringing in Spider-Man, Shang-Chi and Nick Fury himself to reclaim the Helicarrier. As the behemoth craft began to fall from the sky, Viper and the Black Widow fought hand-to-hand atop one of the massive rotors. A foolhardy lunge sent Viper over the side of the rotor. The Black Widow attempted to pull her back up, but Viper fell loose and plunged into the night sky moments before Nick Fury fully restarted the engines and aborted the Helicarrier’s fall. [Marvel Team-Up (1st series) #82-85]

Viper survived the drop from the Helicarrier, presumably through the use of her teleportation ring. She and the Silver Samurai remained together as allies, and Harada quickly became Viper’s personal champion and her lover. The woman who had never loved anyone or anything since the death of her parents now found someone she genuinely cared for.

For their next caper, Viper and Harada attempted to take possession of the Judas Man, Michael Kramer, a veteran who had been genetically infected with the apocalyptic Judas Plague. Mercifully dormant in his system for decades, Viper recreated the necessary catalyst that would unleash the Judas Man’s horror on the world. She also wanted Kramer’s daughter Pamela, who had inherited a genetic cure for the Judas Plague through her father’s altered genes. Pamela Kramer sought out private investigator Jessica Drew to find her father, who distanced himself from his daughter to protect her from Viper’s huntsmen.

This led to Drew’s costumed alias Spider-Woman getting involved in Viper’s plot. She rescued Kramer from Viper’s headquarters, and Silver Samurai ultimately let her go because their genetic scans confirmed the Judas Plague had become inert over the last few decades, making Kramer useless to them. Meanwhile, Viper attempted to kidnap Pamela Kramer from Jessica’s apartment, but Jessica’s friends Lindsey McCabe and Sabrina Morrel opposed her. Viper fled only after being shot by Sabrina and tumbling off the roof of the apartment with Lindsey McCabe. [Spider-Woman (1st series) #42-43]

Furious over Lindsey’s injuries and seeking vengeance, Spider-Woman hunted down Viper and struck at her organization again. The two women fought viciously until they were swept up into a bizarre scenario orchestrated by Morgan le Fay, where Viper was convinced she was both Spider-Woman’s mother and an agent of the Elder God known as Chthon. 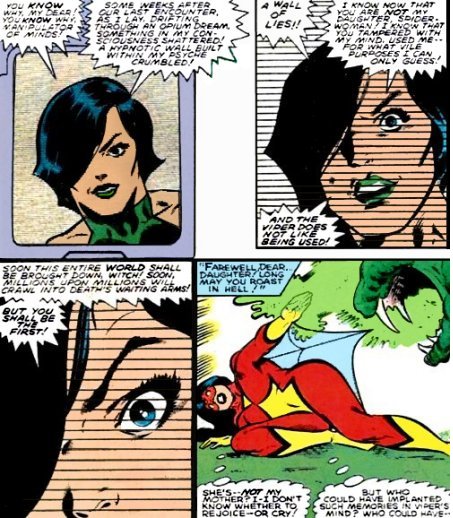 Viper supposedly slipped her leash and broke her connection with Chthon during this struggle, before parting on peaceful terms with Jessica Drew. [Spider-Woman (1st series) #44] Weeks later, however, Viper mentally wrenched herself free of le Fay’s manipulations, and realized “Meriem Drew” was a lie. Irrationally blaming Spider-Woman for playing with her mind, Viper lured Jessica into a trap and tried to kill her with two gigantic poisonous snakes. She failed, but the feud between the two women would continue. [Captain America (1st series) #281]

Viper’s next plot against American interests centered on the small, all-American town of Hartsdale, Illinois. Posing as a young widow named Mrs. Smith, Viper infiltrated the town and established a sprawling underground hideout beneath her deceptively quaint residence. Scientists in her employ rediscovered the bubonic plague, and found a way to weaponize it inside infected snakes. She intended to release the serpents from exploding hot air balloons during a town parade, spreading the plague throughout the countryside.Her desire for revenge led Viper to unwisely order the capture of Captain America during the operation, however, which eventually led to Cap and his partner the new Nomad thwarting her terrorism. Even Viper’s own henchman the Constrictor couldn’t accept her madness,

and he joined the super-heroes and SHIELD in stopping her balloons from releasing the Black Death over Hartsdale. Viper seemingly died again inside one of the hot air balloons as it exploded, but presumably escaped again using her teleportation ring. [Captain America (1st series) #281-283]

Perhaps having faced too many recent losses among her own forces, Viper decided to employ pawns for a new mission. Seeking the cavourite crystal she once eyed as a matrix for her teleportation ring, Viper intended to capture Team America and their mysterious daredevil benefactor the Dark Rider to steal the crystal from AIM for her. Her strike team didn’t count on the New Mutants being present at Team America’s benefit show, however, and only managed to capture the Dark Rider. The situation became even more complicated when Viper learned her captive, the teenaged Danielle Moonstar, was not actually the Dark Rider – the Rider was a composite entity psychically created and imposed upon a host body by Team America. Adjusting her strategy, Viper threatened to kill Danielle if Team America didn’t fulfill the task she set for them. Naturally, the New Mutants objected to Viper holding their teammate captive, and managed to locate her estate near Big Sur, California. During the fight, Karma imposed her will on Viper’s mind, and nearly made her fire upon the Silver Samurai, a violation Viper would not soon forgive. As Viper and Silver Samurai teleported to safety, they detonated explosives at the estate in a vain attempt to kill their assailants. [New Mutants (1st series) #5-6] 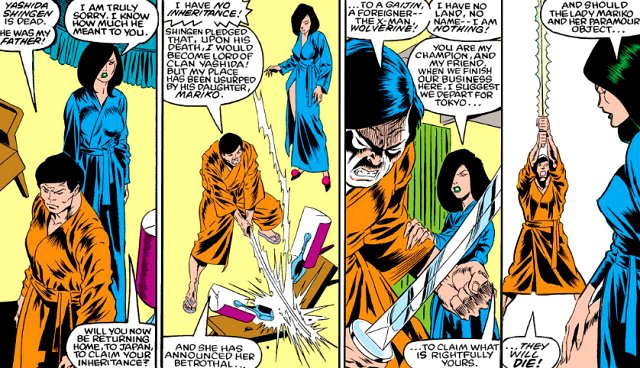 Viper honored her champion Harada by assisting him in a family matter that arose in Japan. The Silver Samurai’s father, Shingen Yashida, died fighting the gaijin adventurer Wolverine of the X-Men. Now Clan Yashida was in control of Harada’s half-sister Mariko, who also intended to marry the man who killed their father. Viper and Silver Samurai came to Japan to help Harada secure his legacy and control over Clan Yashida. Viper infiltrated the Yashida homestead to poison Wolverine and his X-Men teammates, but only managed to incapacitate about half the team. While Wolverine, Rogue and Storm searched Tokyo for the assailants, Viper brought a squad of assassins to the hospital to finish the X-Men off. Wolverine and Rogue intercepted the attackers, and Viper allowed Harada to defend his honor in single combat against Wolverine. When Harada fell, however, Viper prepared to execute Wolverine and Mariko with her laser blaster. She only failed because Rogue threw herself into the path of the blast, defending her friends. With Rogue and Silver Samurai both seriously injured, Viper chose to withdraw with Harada, teleporting them both to safe haven. [Uncanny X-Men (1st series) #172-173]