Born in Camp Verde, Arizona, James Proudstar is the second and youngest son of Neal and Maria Proudstar. Growing up on the Apache reservation, James spent his childhood at the Proudstar Ranch with his parents, grandfather and elder brother, John. Both brothers would eventually develop mutant powers due to their mother's exposure to nuclear fallout after a nearby government test. James idolized his older brother, especially after he left for a two-year tour of duty with the US Marines.

Around the time John returned from service, Maria Proudstar was diagnosed with chronic lymphocytic leukemia, a terminal form of cancer, by Doctor Edwin Martynec. When John's reporter friend, Michael Whitecloud, alerted him that something was amiss with the medical testing, John agreed to help investigate Martynec and the Arroyo Medical Laboratory running the labwork. Looking for adventure, James stowed away in his brother's pickup truck and the three of them infiltrated Arroyo to look for evidence. It turned out that Martynec had been doctoring lab results in order to secure test subjects for his own illegal research in genetic enhancement. The doctor turned out to be a wolfman creature himself, but, thanks to his blossoming mutant powers, John was able to hold his own with Martynec long enough to get the others to safety. Doctor Martynec blew up the Arroyo lab's to cover his escape, and John and James were able to confirm that their mother was actually in perfect health. [X-Force #minus 1] 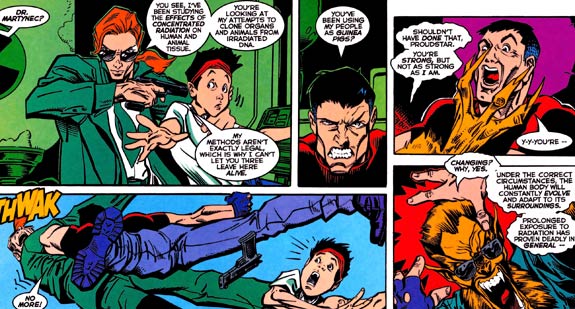 Some years later, John Proudstar was recruited by Charles Xavier to help saving the original X-Men from the island monster, Krakoa, and he ended up staying on with the team as Thunderbird. Tragically, though, Thunderbird was killed on his second mission, while trying to prevent the escape of crimelord Count Nefaria. The X-Men brought his body back to Camp Verde for burial, but it was stolen by James, who took it out into the desert for a proper Apache warrior's funeral

pyre. In his grief, James blamed Charles Xavier for his brother's death and vowed to get even with the X-Men’s leader one day. [Classic X-Men #3] 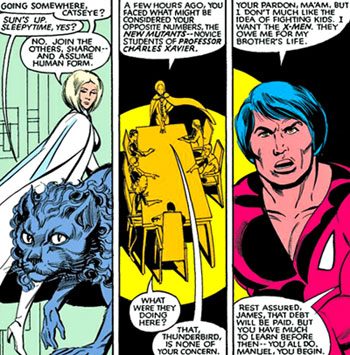 This self-delusion was nurtured by Emma Frost, the White Queen of the Hellfire Club, who had detected James' own developing mutant powers. In order to train to become like his brother and to seek revenge on his and the Hellfire Club's common enemy, Xavier, James agreed to join Frost's mutant students, the Hellions, as Thunderbird II. He seemed to be relatively well focused in his vendetta, though, for in the Hellions' first encounter with Xavier's younger students, the New Mutants, Thunderbird displayed no real hostility towards them. James actually proved to be the voice of reason among many of the more hot-headed Hellions, and distinguished himself as the appointed leader of the group. [New Mutants (1st series) #16-17]

His hatred for the X-Men had not diminished, however, and sometime later he dressed up in his brother's costume and kidnapped the retired X-Man, Banshee, to lead the team into a trap. Alerting the X-Men that Banshee was being held inside Cheyenne Mountain, Proudstar was forcing them to break federal law to enter the NORAD military base (where John was killed) and find Banshee. In his revenge against the X-Men, Thunderbird also received some unwelcome help from his fellow Hellfire trainees Empath, Roulette and Firestar. The X-Men would have infiltrated Cheyenne Mountain successfully if not for the Hellions alerting NORAD to the heroes' presence and stirring up trouble. Confronting Wolverine in single combat, Thunderbird had the chance to leave the weakened Logan and an unconscious Shadowcat to die from nerve gas

NORAD was pumping into the room, but couldn't bring himself to do it. Instead, he even risked his own life to drag them both free of the gas and administer an antidote. He even became furious at Empath and Roulette's intended "help," when innocent people got in harm's way during the fiasco. Conflicted over his own goals, James rushed to the Blackbird outside NORAD to kill Charles Xavier and avenge his brother, but ultimately found that he could not. He made peace with Xavier, who then offered him to stay at his mansion, but James decided otherwise. He realized that he needed to step out of his brother’s shadow and find his own path. For better or worse, returning to the Massachusetts Academy and continuing his training under the White Queen, was a necessary step towards that goal. [Uncanny X-Men (1st series) #193]

Despite his choice of allies, James continued to demonstrate that he was a good and honorable man. When certain events led to the New Mutants being temporarily enrolled in the Massachusetts Academy,  Thunderbird welcomed them with open arms and no trace of hostility over past encounters. Later, after Empath used his powers to psychologically torture two of their 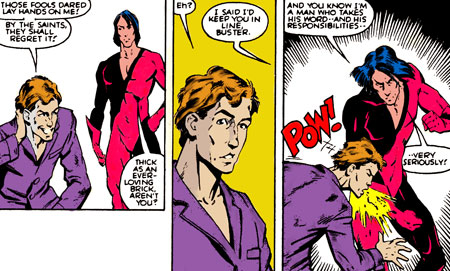 friends, the New Mutants kidnapped him to punish him for his actions. James insisted on taking care of his own people and rounded up the other, somewhat reluctant Hellions to rescue their least pleasant member. The New Mutants agreed to turn Empath back over to Thunderbird when confronted, and Proudstar personally decked Empath for his actions, promising to keep him in line. [New Mutants (1st series) #39, 43]

As time passed, the New Mutants and Hellions became closer after Magneto joined the Inner Circle and forged a truce between Xavier's people and the Hellfire Club. Thunderbird developed a bond with his fellow leader, the Cheyenne New Mutant, Mirage  aka Dani Moonstar, and there

were hints that their mutual admiration might've evolved into something more, in time. However, they were only granted a few private moments, as the duties to their teams kept them on opposing sides more often them not. [New Mutants (1st series) #53-54, 56] 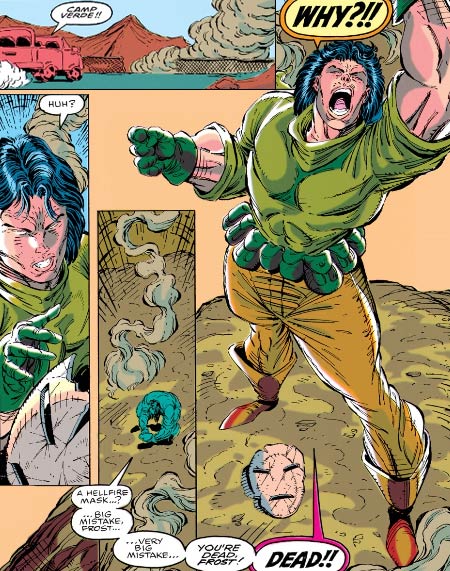 As things turned out, though, Proudstar was becoming more and more disenchanted with his life as a Hellion, and longed to return home to Arizona. He parted ways with the Hellions and went back to living with his family on the Camp Verde reservation. He was approached by the New Mutants' new leader, Cable, to join the group, but initially turned down the offer. Arriving back home from that meeting, however, James found his entire reservation devastated, his family, friends and entire tribe massacred to the last man. His only clue to the attack was a discarded mask from one of the Hellfire Club guards, leading him to blame Emma Frost and her organization. After burying all the residents of the camp, including his own family, James traveled to Xavier's school and agreed to join the New Mutants and fight for Cable’s cause in exchange for his assistance in taking revenge for the murders of his people. [New Mutants (1st series) #99-100]