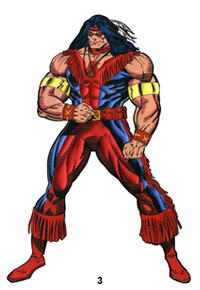 1) James Proudstar originally wore the standard Hellions uniform, made primarily of a dark purple color with a lighter pink on the left sleeve, diagonally crossing the body and down the right leg, with a small right triangle symbol on the left side of the chest. [New Mutants (1st series) #16]

2) His second uniform was a recreation of his brother's X-Man costume — a dark blue bodysuit with a large red eagle crest on his chest that spread down the inside of his legs. The shirt was very short sleeved with red tassels, also on his red boots. He also wore gold wristbands, a gold belt with the eagle crest as a buckle, a red domino mask, and a red bandana with eagle feathers sticking out the back. James wore this costume when he tried to avenge his brother death, [Uncanny X-Men #193] and also when he joined the New Mutants/X-Force under Cable’s leadership. At some point, he added large red shoulder pads to the costume. [New Mutants (1st series) #99, X-Force (1st series) #3]

3) His next Warpath costume was designed by Boomer as a slight variation on his old suit. The same basic design, the costume was now completely sleeveless, with red wristlets and gold bands on his upper arms. The eagle crest was now tasseled up and over his back, and his chest was bare above it. He wore a large gold neckbrace, a medicine pouch necklace, and a new red 'X' belt. [X-Force (1st series) #19] 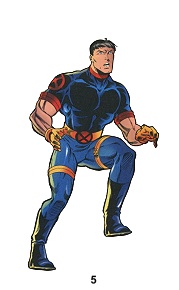 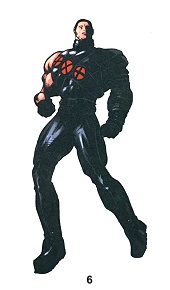 4) After Cable had the team's uniforms reworked, Warpath's costume was dramatically different. He now wore a short-sleeved purple bodysuit covered with yellow chaps meeting at a yellow 'X' belt. For a time, he wore a slight variation of this costume with two red 'X's extending from his shoulder down to the end of his sleeves. [X-Force (1st series) #44]

5) Shortly after he rejoined the team during the Onslaught crisis, Warpath adopted a short-sleeved blue costume, with yellow gloves and straps on his thighs, dark blue-black jack boots, a standard 'X' belt, and a red neckline, red cuffs on his shirt, and red 'X's on his sleeves. [X-Force (1st series) #59] However, he soon returned to his previous outfit.

6) When Pete Wisdom transformed X-Force into a covert ops group, their costumes were changed to fit the part. Proudstar was outfitted in black leather from the neck down, with the exception of a bare right arm. He also wore a bandoleer of three red 'X' insignias slung over his chest. [X-Force (1st series) #102] 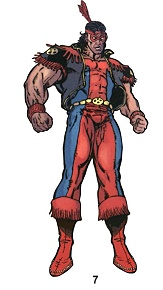 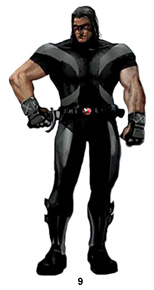 8) After Warpath joined the X-Men, he wore a blue, sleeveless bodysuit that had red patches on the shoulders and the waist. He accompanied it a pair of golden bracelets, a thin belt with an X-buckle on it and a pair of red boots. He also carried around a pair of vibranium bowie knives that Storm had given to him as a present. [Uncanny X-Men (1st series) #475]

9) When he joined X-Force, Warpath wore a monochrome version of his regular X-Men costume to match the rest of the team’s uniforms. He also accompanied it with a black face mask that had 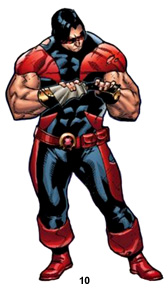 red eyes. This uniform was only used on X-Force missions, whereas his previous one was still used when operating with the X-Men. [X-Force (3rd series) #1]

10) After leaving X-Force, he returned to just using his blue bodysuit with red patches. His new version of this costume featured cuffed boots and slightly different red and blue patterning on the shoulders and thighs. [X-Men (3rd series) #20]