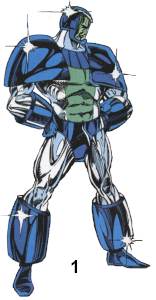 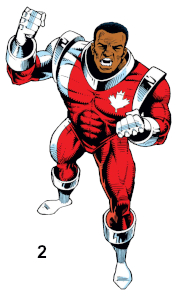 #1) Colin's original Windshear costume, designed by Roxxon, consisted of a mostly white one-piece body armor suit, with a green panel running down the middle of his chest and abdomen, clunky blue boots and gauntlets around his wrists, with blue bands across his thighs and a blue chest plate running across the top of his chest into large shoulder pads. He also wore a blue helmet with a green faceplate. [Alpha Flight (1st series) #87]

#2) As Alpha Flight's Chief Administrator, Windshear issued the team with a group uniform which consisted of a mostly red one-piece body suit, with a white stripe down the right side of the body, white boots and gloves and a white maple leaf across the left of the chest. Windshear's boots were quite large, reminiscent of his original costume, and his costume retained the gauntlets like his original, too. He also retained shoulder pads, although his were much smaller than his original costume. He continued to wear a helmet, although this was now red with white panels across the face. [Alpha Flight (1st series) #104]

#3) After losing his powers, Colin eventually took up the mantle of Chinook, where he wore a battle suit that replicated most of his original mutant powers. The battle suit was mostly white and provided him with some body armor. The suit had red boots and gloves, but the most striking aspect was the red cowl that draped into a long red cape. A large red arrow on Chinook's chest pointed to the right, while the outfit was completed with a belt that contained several pouches holding various weapons that assisted Chinook with his crime fighting escapades. [Death of Wolverine: The Logan Legacy #2]