Colin Ashworth Hume (or “Colly” as he was affectionately known by his maternal grandfather) was born in Canada to Jacqueline Freeman Hume and her British diplomat husband, Frank Hume. When he was four years old, he witnessed a street fight which both sickened and fascinated him. He was curious as to how it would feel to hold the weapons the street fighters were using, but his grandfather made him swear never to raise a fist in anger or hate. [Alpha Flight (1st series) #124] One year later when he was five, Colin's parents decided to relocate to England, where his father Frank was from. This was despite his grandfather's plea to Jacqueline not to leave. His grandfather had disapproved of Jacqueline marrying Frank and did not want to see Colly grow up in England. [Alpha Flight (1st series) #95]

Ten years later, Colin was walking down an alleyway when he was confronted by two thugs. 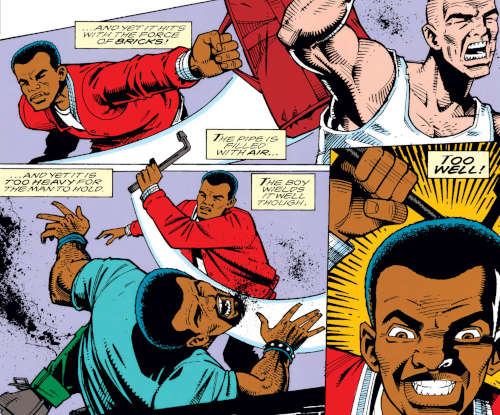 Terrified, Colin's mutant power to create “solid air” manifested when he hit one of the thugs with a duffel bag, a bag which suddenly felt as if it contained bricks. He then struck the other thug with the thug's own weapon, a pipe, made stronger as it was filled with air. Colin appeared to enjoy taking the brutes out but, sickened by what he did, he vowed to hide his mutant power. [Alpha Flight (1st series) #124]

Around this time, Colin was playing football for his school when his parents arrived at the game to inform him that his grandfather had died and they were heading to Canada to make the funeral arrangements. Colin thought about going with them, but was preoccupied with an upcoming exam and football game, so he did not attend the funeral and did not get to say goodbye to his grandfather. [Alpha Flight (1st series) #95]

Somewhere along the way, Colin got used to using his mutant powers and did so openly. In fact, he eventually took up a job with Roxxon Oil's British division, where he used his abilities as their specialist operative. They provided him with a high-tech body-armor suit, which helped him with his powers. He was also given the codename “Windshear” and at one point was sent to the 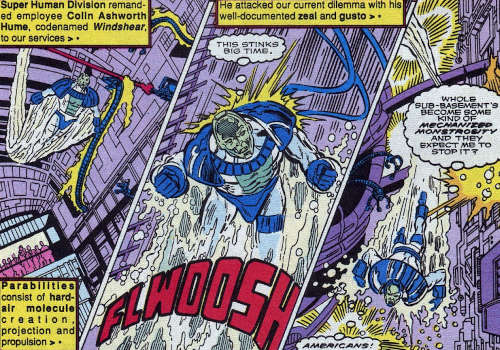 Energy Research facility in Denver, Colorado, in the United States, which was overseen by Samuel Higgins. The facility's sub-basement contained several computer systems, which had begun to act strangely. Windshear attempted to deactivate the computer systems, but they weaponized against him and knocked him out.

Roxxon called in an assist from the Canadian government, as they were aware of the mutant known as Box, who could communicate with technology. When he arrived with Diamond Lil, Box got straight to work, assisted by Windshear. Box soon discovered someone within the Roxxon technology trying to communicate with him. Samuel Higgsin soon reported that whatever was disturbing their electronics system had also accessed other networks outside of this facility.

Realizing further assistance was required, Windshear accompanied Box and Diamond Lil to Muir Island to request help from Forge. However, as they arrived unannounced, they were knocked out 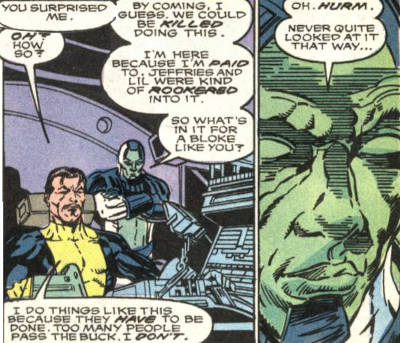 of the air by the Muir Islanders, a loose-knit team of X-Men associates who resided at the island at the time. Fortunately, the situation was soon diffused and the Canadians were welcomed as guests. Windshear suddenly found himself thrust into a world of superhumans he had never experienced before, not to mention challenging his beliefs. When Forge agreed to return to the States with Windshear and the Alphans, Windshear admitted to only being here because he was paid to be, and found it interesting when Forge explained that he was here because things like this need attention, and he wasn't one to pass the buck.

When Windshear, Box, Lil and Forge returned to Roxxon, they found the facility all but destroyed and the bodies of Roxxon staff strewn about. To complicate matters, when Forge and Box were able to link up with the man that was earlier discovered in the computer system, he was revealed to be none other than James Hudson, Alpha Flight's founder who was long-thought dead. Windshear had trouble believing this but Forge told him that, in their line of business, death had a habit of making a liar out of the truth. The surprises kept coming when Windshear discovered that the facility controller, Higgins, knew that Hudson was behind their troubles – and that the elaborate story an impersonator passed off as how Hudson survived being killed, was actually true.

When Hudson was freed from within Roxxon's systems, Windshear confronted Samuel Higgins

about what they were doing to Hudson, and accused him of not caring about the facility or the people who worked there and that all he was interested in was money. Windshear then quit working for Roxxon and accompanied Box and Diamond Lil back to Canada, unaware that Samuel Higgins vowed to get revenge on Windshear and his Roxxon-owned armor. [Alpha Flight (1st series) #87-90]

Windshear began his heroic career at a time of change for Alpha Flight, which was coming out of a long period of being without government support. Its members were now looking to a brighter future where they were backed and funded by the Canadian government. Not yet a member of Alpha Flight, Windshear and fellow Alpha Flight hopeful, Witchfire, accompanied Sasquatch and Alpha Flight's new government liaison, Kerry Patrick, to Toronto where Alpha Flight's new headquarters was being built. During the visit, Windshear accused Sasquatch and Kerry Patrick of not trusting he and Witchfire, despite being told that they were just assessing his personality at this stage. Nevertheless, when a construction site accident took place, Windshear's slightly aggressive attitude gave way to a heroic act when he used his mutant power to deflect the falling steel beams, and even checked on the construction workers to see if they were okay. [Alpha Flight (1st series) #91]

When a squad made up of members of Alpha Flight and the Fantastic Four went missing while investigating strange goings on in the town of Tuktoyatuk, Windshear found himself joining a second squad who subsequently went to find their teammates. He continued to be amazed by the sorts of things that heroes come across – such as this town full of unresponsive civilians gathered in the town square. The first team of Alphans soon appeared – albeit under the psychic control of the villain known as Headlok. To protect the civilians from the aggressive first team, Windshear 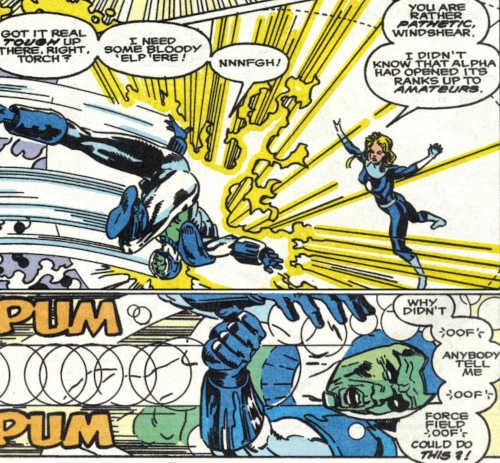 quickly raised a wall of solid air around the civilians, before finding himself up against the Invisible Woman in battle. However, given his lack of experience, he was easily defeated. Although the heroes eventually captured Headlok, Windshear was rattled by the adventure, and elected not to join the heroes in their jet as they returned to Toronto, preferring to fly with Aurora. Along the way, he confided to her that might not be good enough to be a hero. [Alpha Flight (1st series) #94]

With his Alpha Flight status still unknown, Colin took some time to visit his grandfather's grave for the first time in his life. He admitted that he regretted not attending his grandfather's funeral, and vowed to be a better person, to do more with his life. He got that opportunity soon after when came across a group of thugs trying to steal something from another man. Knowing that the old Colin wouldn't intervene, he used his powers to defend the victim, and then himself against the thugs. During this skirmish, he even attempted to use his power in a new manner, by solidifying all the air around him to create a hard air explosion.

Later, Colin attended a meeting with Alpha Flight and other associates in which a new roster was established and was slightly surprised to be given full membership status. [Alpha Flight (1st series) #95] When Alpha Flight were dispatched to fight an oil spill, Windshear proved invaluable to the team. When Alpha Flight's leader, Heather Hudson, became trapped in a flashfire, he was able to use his power to deflect the fire and save her. Heather was impressed by Windshear’s 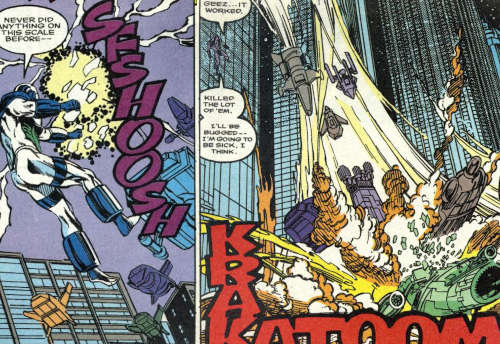 selfless act, one that endangered his own life. [Alpha Flight (1st series) #96]

When aliens known as the Consortium invaded Toronto in search of the alien known as Her, Windshear found himself using his powers in new ways again, and in one such instance destroyed several Consortium spaceships, killing all of the aliens aboard.

During the fraught battle, Windshear was one of the members of Alpha Flight who, along with several Avengers, were transported to the planet Quwrrl, home world of the aliens known as the Quwrrln. It was these extraterrestrial who had been responsible for saving James Hudson when he seemingly died those years ago but the Quwrrln were now in danger themselves. The World Devourer, Galactus, had recently selected their planet as his next meal. When the heroes debated whether to help the Quwrrln, Windshear expressed the view that they shouldn't help the aliens but was out-voted. When the heroes began to fight Galactus, Windshear was sent to scout for Galactus' Herald, Nova, who had been knocked out of the battle. Colin found her captive of the Quwrrln and, by the time he liberated her and returned to Earth, the other heroes had convinced Galactus to feed instead on the Consortium, the aliens currently ravaging Toronto. [Alpha Flight (1st series) #98-100]

When most of Alpha Flight were on a secret mission out of Canada, Windshear was left behind at the new Department H headquarters with Puck, who had accepted the role of Chief Administrator following James Hudson's death. Windshear found Puck in an office one day, frustrated with the amount of paperwork he had to deal with while the others were on a mission. The frustration had reached a breaking point and, seeing a solution, Puck abdicated the position to Windshear, 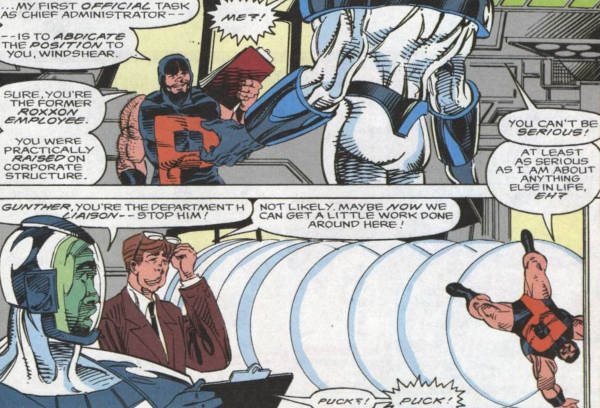 without Colin getting any say in the matter. Given that Windshear worked for Roxxon, Puck thought he would be perfect for the corporate matters Alpha Flight had to deal with. When Windshear asked the Department H government liaison to stop Puck from doing this, his request was rejected.