Unfortunately, Windshear's first appearance as Chief Administrator was on the talk show CANADA A.M., where he responded to public criticism that the general public did not support Alpha Flight assisting the alien Her against the Consortium given the amount of damage that Toronto sustained. Windshear stated that he disagreed with the decision Heather Hudson made to assist Her, a public criticism which Puck decided was not very sporting. Soon thereafter, Windshear was giving a tour of Department H to several reporters, who were interested to know how the tax payers' money was being spent, when Alpha Flight returned from their secret mission. The reporters ambushed Heather Hudson about the Consortium debacle and asked her if she was stepping down as team leader. Fortunately, Windshear intervened and took control of the reporters. Windshear also made the decision that Alpha Flight should wear a team uniform and, following a slight roster change in which a five-member “Core Alpha” team was decided, Windshear essentially found himself a reserve member of the team, with his main focus administrative. [Alpha Flight (1st series) #102-104]

Windshear found himself the only Alphan left at Department H while the Core Alphans joined up with other heroes around the world to investigate a cataclysmic crisis. It is probably a good thing he remained, behind because the long-missing teenage heroes, Beta Flight, who had been missing since before the Consortium crisis, made a surprise return into Department H. Fleeing Alpha Flight's enemy the Dreamqueen, one of their number, Laura Dean, had managed to open a portal into Department H to escape their enemy, but with them came a number of the Dreamqueen's army. Fortunately, Windshear was able to blast back through the portal with his powers. Nevertheless, Windshear was furious at Beta Flight for bringing danger into the heart of Department H, unaware of the horrors they had recently suffered. An unimpressed Witchfire challenged Windshear and accused him of hiding behind his desk, but Windshear was defiant and grounded Beta Flight, demoting them to the Gamma Flight training status. [Alpha Flight (1st series) #109]

With Core Alpha still in New York dealing with the cosmic crisis, Windshear was alerted by medical personnel after Talisman was attacked while at a mall. Windshear was confused by Talisman's cryptic comment to him when she told him “They're out.” Adding to his trouble, with the rest of Alpha Flight unavailable, he had to attend to a crisis in Toronto when a riot erupted during a wave of violence, committed by the locals. After rescuing a woman from being run over, Windshear turned his attention to a fire that had broken out, thanks to an entity known as Firebug, and was frustrated to discover on the scene was Gamma Flight, who had gone out for a night on the town. Windshear began to argue with Manikin about Gamma Flight, not prepared to listen to Gamma Flight's side of the story and was unaware about the invading aliens known as the Ska'r. Windshear was suddenly put under Persuasion's control, so that Gamma Flight could get on dealing with the situation. Persuasion controlled Windshear and his power, while Gamma Flight fought the new Omega Flight team. When Windshear was released from Persuasion's control, he was not pleased to have been used, but admitted that Gamma Flight were not the rank amateurs he thought they were. 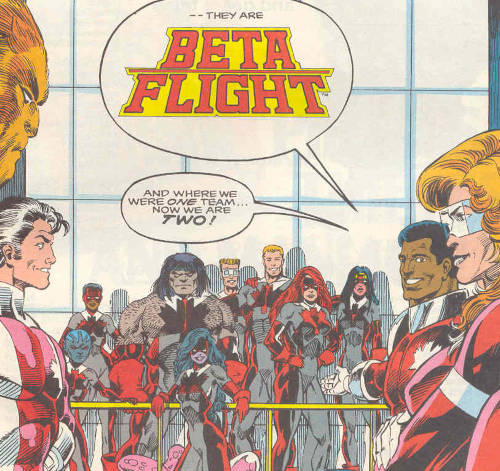 Windshear then fought alongside Gamma Flight against the Master of the World. After an initial setback against one of Alpha Flight’s oldest foes, Windshear and the Gamma team drove back the Master, who fled. Afterwards, once Alpha Flight returned to Department H, Windshear admitted that he was wrong to treat the young heroes the way he did and, along with promoting them back to Beta Flight status, he provided them with their own team uniform. [Alpha Flight (1st series) #110-112]

Colin was taken aback when Heather Hudson mobilized Beta Flight to deal with a crisis at a chemical facility. He was concerned for their well-being, but Heather told him not to worry and reminded him that he spoke up about their abilities recently. She even jokingly referred to Colin as Beta Flight's “dad.” [Alpha Flight (1st series) #114] Colin didn't have long to worry about Beta Flight, though. As media interest in the exploits of superhuman activity in Canada continued to increase, he found himself fronting more press conferences with Heather Hudson. Although she was not interested in addressing the media, she was concerned with how the actions of Alpha Flight would be reported in the next day's headlines. [Alpha Flight (1st series) #116] Colin later got in some field time when he joined the rest of Alpha Flight in the search for their missing teammate, Weapon Omega. [Alpha Flight (1st series) #117]

Trouble loomed for Windshear and the members of Alpha Flight when politician Robert Hagon proposed a Super Powers Bill to the Canadian parliament, whereby paranormals in Canada would be required to register with the Canadian government. However, a more immediate concern was the American criminal known as Thunderball, who was causing trouble in Toronto. Windshear joined his teammates on the assignment, where he attempted to restrain Thunderball with a solid air block. The restraint didn't last long, as Thunderball smashed his way through it. The battle raged for some time and intensified with the arrival of Thunderball's teammates in the Wrecking Crew, resulting in significant damage to downtown Toronto. Alpha Flight worried as to how this 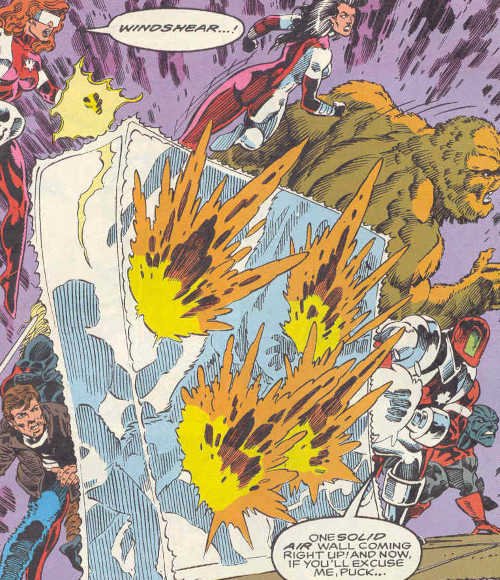 might impact the Super Powers Bill. When confronted by a vigilante group of mercenaries called the Hardliners, who were tasked with capturing a young mutant, Alpha Flight knew their place was to continue to defend the people of Canada, no matter what the outcome of the Super Powers Bill. During a brief encounter with the Hardliners, Windshear was instrumental in protecting the young mutant, but was eventually taken out by the Hardliners. In the aftermath, Alpha vowed to fight on. [Alpha Flight (1st series) #118-120]

When the cosmic being known as the Goddess created a utopia known as Paradise Omega, Windshear was one of the many heroes converted to her cause, which led him to battle many other heroes who were fighting against the Goddess. During the cosmic event, Windshear eventually fought back against the Goddess, realizing that he has been fighting a part of himself all his life. Now, however, he would fight no longer, dreading being controlled by the Goddess for the rest of his life. [Infinity Crusade]

Windshear's time with Alpha Flight soon came to an end, following the passing of the Super Powers Act and another debacle with the Master of the World, who attempted to take control of the Canadian government. The government decided the risks of the heroics of Alpha Flight needed to be considered further, and Alpha Flight was shut down. [Alpha Flight (1st series) #130] While some members of the team remained at Department H in advisory capacities, Windshear was not one of them and he left Department H.

At some point, Colin returned to England and, despite Alpha Flight starting up again, he was not invited to return to the team. In his time away from Alpha Flight, Colin learned how to refine his abilities further, and could now create solid objects that did not dissipate. He opened a store in the Notting Hill District where he sold these objects. One day, a woman named Andrea Sterman, who once worked for the Commission on Superhuman Activities, visited Colin's store as part of an investigation into bullets that were discovered to have been made of hard air. When Colin was queried as to whether he ever created hard air bullets for Roxxon, Colin explained that, when he 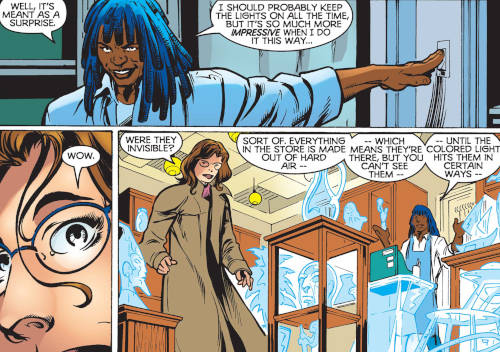 worked for Roxxon, any use of his mutant power was considered property of Roxxon. He further explained that, in those days, the air was kept in vacuum-sealed containers but, even if it had been removed, it would have been useless, as the objects did not stay solid for long back then. Colin supposed that Roxxon might have found a way to keep the objects in a solid state, but was not part of any further research into Andrea's investigation. [Thunderbolts (1st series) #43]

When the Scarlet Witch de-powered 99% of the world's mutant population, Colin was one of the many mutants to lose their powers during this tragic event. [New Avengers (1st series) #18] Some years later, Colin was invited to commentate on the super hero talk show Power Plays, who were doing an episode focusing on the recent outing of Betty Ross as the Red She-Hulk. Colin expressed the view that, by inviting Red She-Hulk into the Avengers, Captain America was turning a potential disaster, such as a rogue Hulk, into an asset by providing Red She-Hulk with a stable team environment from which to use her abilities, similar to the opportunity he was given when he was invited to join Alpha Flight after he quit working for Roxxon. [Red She-Hulk #63]

Tragically, at some point Colin developed leukemia and eventually relocated back to Canada, where he equipped himself with a battle suit that replicated most of his mutant powers (although he could no longer fly). He then took up the codename of Chinook, as he embarked on a street-level crime-fighting career, investigating gangs and other criminals. One such investigation took 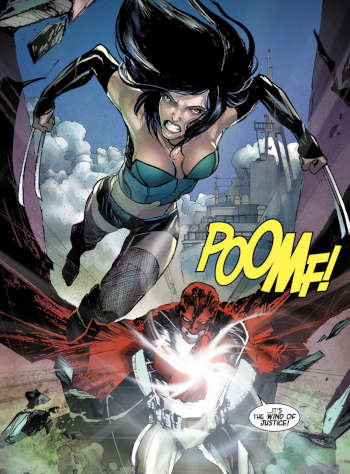 him to a club which was run by an old Alpha Flight villainess called Pink Pearl, where he found himself working alongside Laura Kinney, X-23. Colin explained to X-23, who was grieving the loss of Wolverine, that even though he was sick, he found putting on this new costume had given him some purpose in life. They worked together to take down Pink Pearl. [Death of Wolverine: The Logan Legacy #2]

It remains unknown whether Colin won his fight against the leukemia, or whether he continues his crusade as Chinook. Perhaps Colin might make his way to the new mutant nation of Krakoa, where he could take part in the ritual known as Crucible, which would give him the chance to be reborn with his mutant powers.