-) Upon arriving at Xavier’s, Kevin was given special clothing made of synthetic materials that could resist the effects of his decaying power. This usually consisted of long-sleeve shirts, pants and gloves, all in black. [New Mutants (2nd series) #3] 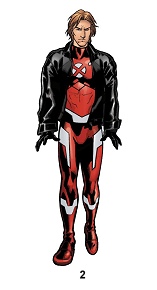 1) Wither’s first costume was a variation on the New Mutants squad training uniform. This outfit consisted of a stylized white and yellow bodysuit with silver adornments and a large blue X symbol in the center of the chest. Kevin also wore yellow protective gloves and a long white trench coat with yellow-gold shoulder adornments and blue X symbols on the side of each sleeve. [New X-Men: Academy X #3]

2) After joining the Hellions squad, Wither changed his costume to match theirs. His new uniform consisted of a red and white bodysuit with a red and white X symbol in the center of the chest and white accents. Over this, Kevin wore a black leather-like jacket and black gloves. [New X-Men: Hellions #1]

3) Despite being a member of the Hellions, Kevin often appeared in a simple, all-black outfit. This always included a black jacket and gloves. After leaving Xavier’s, Wither continued to wear this outfit almost exclusively.