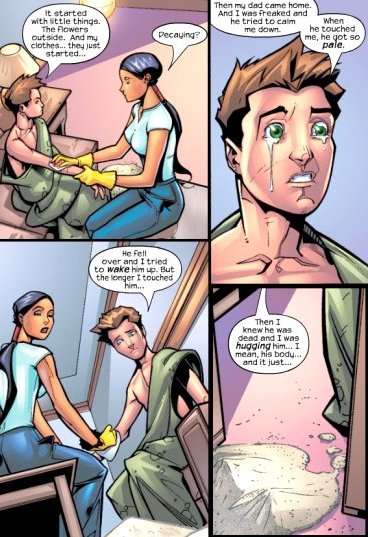 Kevin Ford was born and raised in Atlanta, Georgia, living a relatively normal life despite the death of his mother during childbirth. He was a good student, excelling in art and winning numerous awards for his talent. However, as his mutant powers began to manifest, things around him started to decay. Kevin panicked when he first noticed the effects of his mutant death-touch which withered flowers and caused his clothes to break apart at his touch. His father arrived home and tried to console his son but, the moment he touched Kevin, he turned pale. Kevin grasped at his father but he was already dead. Before Kevin realized what he had done, his father’s body was reduced to a pile of ashes.

Kevin sought refuge in the junkyard where he often found materials for his forays into industrial art. He was attacked by a guard dog which died the instant it bit him. When the owners discovered Kevin and the dead dog, they recognized him for what he was – a mutant – and proceeded to attack Kevin. However, their assault was interrupted by Danielle Moonstar, who had come to Atlanta in search of a new mutant. After hearing his story, Danielle offered him a place at the Xavier Institute. [New Mutants (2nd series) #3]

At Xavier’s, Kevin was outfitted with special synthetic clothing that would protect the rest of the student body from his powers. Initially, Kevin avoided contact with the other students, but he caught the eye of Laurie Collins aka Wallflower and soon found himself part of her growing circle of friends. Kevin was determined to learn to control his power and become an X-Man to atone for 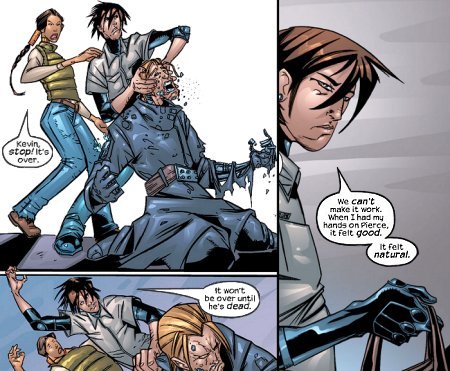 what he had done to his father. During an outing to New York, Kevin and the others were attacked by Donald Pierce and his Reavers. When Pierce almost killed Laurie, Kevin attacked Pierce and was about to kill him in return. He refused to stop at Moonstar's command, and so she showed him a vision of his greatest fear – using his power to kill Laurie and his friends. Upon returning to the Xavier Institute, Kevin admitted to Dani that using his power against Pierce felt good and natural. Rather than put his friends at risk, Kevin decided to leave the school and not return until he could control his abilities around other people. [New Mutants (2nd series) #4-6]

Several months later, Dani sought Emma Frost’s aid in locating Kevin and they soon found him living and working in a junkyard on Staten Island. Kevin resisted Dani’s attempt to convince him to rejoin Xavier’s and asserted that he had a place to live where he couldn’t hurt anyone. However, Dani found ashes in the area near his shack that suggested he may have been trying to hone his powers by using it on small animals. Emma pointed out to Kevin that he had made no progress in mastering his powers and that Xavier’s could offer him the instruction he needed. Kevin was convinced by Emma and returned to the school, joining Dani’s New Mutants training squad and taking the codename Wither. [New X-Men: Academy X #3] 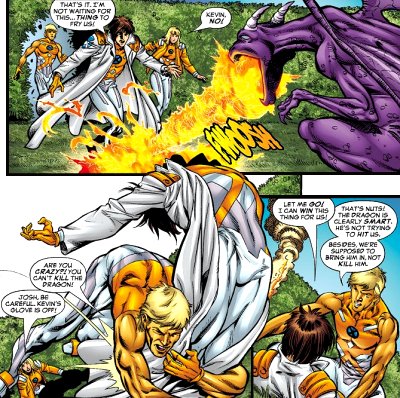 Wither was agreeable to joining Dani’s squad in order to get close to Laurie Collins. Laurie, however, had become romantically interested in another teammate since Kevin left, Josh Foley aka Elixir. Naturally, this caused tension between Kevin and Josh. During a squad competition, Wither attempted to use his deadly power against Lockheed the dragon, who was part of the challenge, but Elixir stopped him and challenged Kevin’s willingness to use his power against another living being. Kevin was upset and isolated himself from the others, pouring himself into his art. To his surprise, he was approached by Cessily Kincaid, aka Mercury from the Hellions training squad. Cessily’s mercury-based form was immune to Kevin’s withering touch and she had a bit of a crush on him. Kevin began to hang out with the Hellions rather than his teammates.

Kevin’s past soon came back to haunt him. The FBI sought to arrest Kevin for the murder of his father. This led to rumors among the student body about Kevin’s dangerous power. Surprisingly, the Hellions’ leader Julian Keller publicly chided his fellow students for their hypocrisy, reminding them that they were all dangerous and that the human authorities could legitimately come for 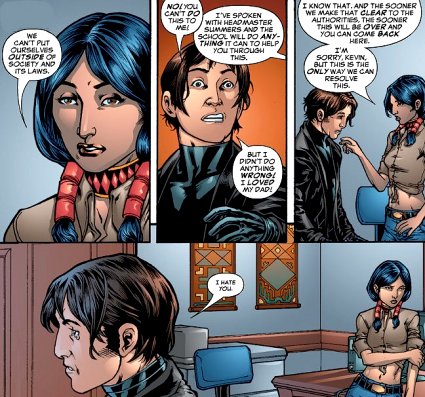 several of them. Ultimately, the headmasters of Xavier’s decided that it would be best for Kevin to face the charges against him and show that mutants were not above the law. Kevin felt betrayed by the school, especially his advisor, Dani Moonstar. While en route to jail, the Hellions squad tried to free Wither from custody. They were stopped by the New Mutants, who understood what would happen to the Institute if the Hellions succeeded in freeing Kevin. Fortunately, Kevin’s case was dismissed and his father’s death was ruled an accident. Still, Kevin was deeply wounded by Dani and the New Mutants' betrayal. When he returned to the Institute, he requested to be transferred to the Hellions because they were willing to stand up for him no matter what. [New X-Men: Academy X #4-6] 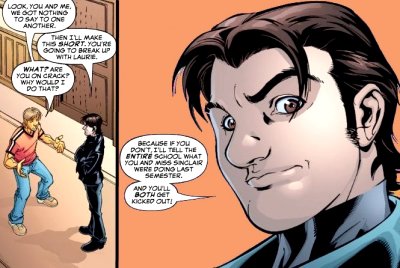 Despite joining the Hellions, Kevin continued to be unhappy at Xavier’s. He still harbored feelings for Laurie and continuously butted heads with Josh as a result. Kevin was even more conflicted when he discovered that Josh had also been seeing Wolfsbane, a teacher at the Institute. Josh and Laurie had officially begun dating since then, and Kevin saw how this information could be used to his advantage. Still, he also recognized how Laurie could get hurt as a result. Meanwhile, worried about the isolating nature of Wither’s powers, Emma Frost sought the help of renowned psychologist Dr. Sean Garrison and asked him to counsel Kevin. Dr. Garrison encouraged Kevin to start working towards his own happiness. This prompted Kevin to blackmail Josh by threatening to expose his affair with Wolfsbane unless he broke up with Laurie. When Josh refused, Kevin went to the headmasters with this information. [New X-Men: Academy X #10-12]

Kevin’s revelation had broad effects on the staff and students at Xavier’s. Laurie and Josh broke up and Wolfsbane left the Institute rather than face the prospect of being fired. The New Mutants 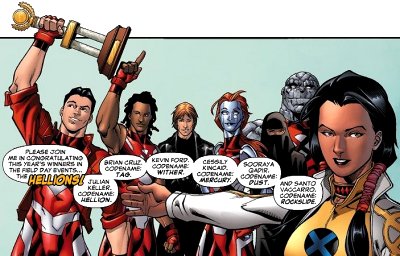 squad was nearly torn apart by the resulting emotional strife. Laurie also didn't seem particularly interested in Kevin anymore, even with Josh out of the picture. She chose to go to the end of the year dance with her squadmate David as friends before Kevin could ask her out. Even his squad leader Julian admonished Kevin by this time, chiding him for wanting what he couldn't have when Cessily was pinning for him. However, Wither and the others were able to temporarily set aside their growing animosity to repel an attack on the Institute by the Blob. [New X-Men: Academy X #14-15]

The school year concluded just after this incident and Wither and the Hellions squad were awarded a trophy as winner of the Field Day events for the year. Despite their success, the squad was largely despised for their victory due to Hellion’s gloating. [New X-Men: Hellions #1]

Wither and the Hellions squad spent the summer break in California at Hellion’s home. While there, the team contacted the power broker known as the Kingmaker, who offered to fulfill their greatest wishes in exchange for their services. Kevin was thrilled to be given a prescription for a power-negating “cure.” For the first time since his powers manifested, Wither was able to touch others. However, the price for these wishes was higher than the team bargained for. The Kingmaker had Kevin and the others sign contracts in which they agreed to work for him in

exchange for the continuation of their wish fulfillment. The first “favor” he requested of the team was to steal a biological weapon from a research company. Faced with this moral dilemma, Wither was one of the first to try and call off their deal, despite now having a means of controlling his death touch. Together, the Hellions defeated the Kingmaker and destroyed the bio-weapon he was after. When the “cure” wore off, Kevin’s powers returned with a vengeance and he admitted to his friends that his powers were like a hunger inside of him. [New X-Men: Hellions #2-4]