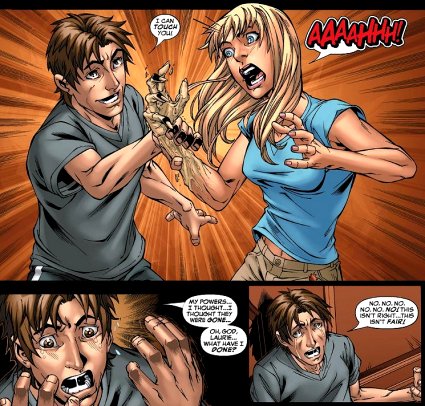 Shortly after the Hellions returned to the Xavier Institute, the mentally unstable Scarlet Witch created a reality-warping effect, referred to as M-Day, during which over 90% of Earth’s mutant population were rendered powerless. This lead to a chain reaction of events at the Xavier Institute campus as a majority of the student body discovered that they were no longer mutants. Assuming that he had lost his powers too, Kevin reached out jubilantly to Wallflower, exclaiming that he could finally touch other people. Unfortunately, Wither was one of the few mutants who retained their powers and he watched in horror as Laurie’s arm withered into a lifeless husk. [New X-Men (2nd series) #20]

Kevin was wracked with guilt over what he had done to Laurie and at the same time had to deal with feelings of injustice and frustration that he had retained an active mutation when he would have been happy to be rid of his. When he overheard part a conversation between his teammates regarding what he had done to Laurie and how dangerous his powers were, Kevin felt betrayed and decided to leave the Institute. [New X-Men (2nd series) #22]

Wither made his way to Mutant Town where he lived a solitary life among the depowered mutants who still resided there. Kevin’s emotional state became even more fragile when he learned about the deaths of dozens of his former classmates during a series of attacks on the Institute. Among the dead was Laurie Collins, who had been killed by one of the Purifiers’ snipers. Emma Frost was aware of Kevin's whereabouts, but chose not to make him return to the Xavier Institute as she understood that Kevin needed time to himself. Additionally, she feared for the safety of her other students and the incident with Laurie had proven that Wither’s powers posed a constant threat to everyone else.

While living in Mutant Town, Wither befriended an elderly woman who seemed to be a former mutant herself. The two developed a quick friendship and she seemed to understand Kevin’s plight. She tried to get him to embrace his power and view it as a gift. When a series of gruesome 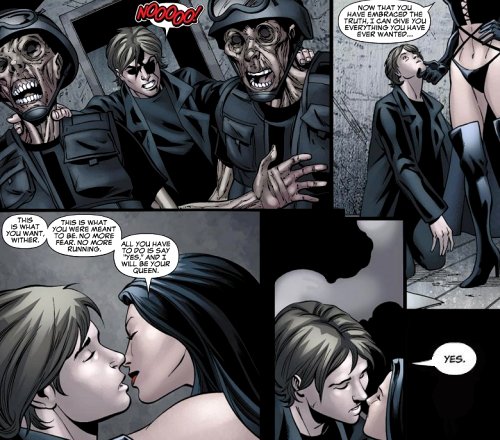 murders in the area led the police to Wither and his companion, the old woman used her powers against two of the officers, draining their life forces and turning them to ash. When the remaining officers opened fire on her, Wither used his power against them to avenge his friend's death. It was only then that the woman revealed her true identity: Selene, the former Black Queen of the Hellfire Club. Selene declared that she and Wither were the same, both killers by nature of their mutant powers. She told Kevin it was time to accept who he was and stop running. Selene offered him everything he desired if he simply embraced his powers and accepted her as his queen. Wither gave in to Selene’s charms, not only embracing his powers but accepting her as his queen and lover. [New X-Men (2nd series) #32]

Inspired by the loyalty shown by the White Queen’s students, past and present, Selene spent the next few months gathering an inner circle of deadly mutants to worship her and support her long-term goals. During this period, she helped Kevin confront his reservations about his powers and become a merciless killer. As Selene moves forward with her quest to become a true goddess, Wither stood beside her as her most devoted disciple. [X Necrosha: The Gathering #1]

Kevin’s devotion to Selene caused immediate tension between he and Eli Bard, a former lover of the Black Queen who had spent centuries trying to regain her favor. Wither was naturally envious and suspicious of Bard and tried to undermine him at every turn. He delighted in Bard’s failure to supply an ancient spirit blade Selene required for her ascension to godhood and joined in the 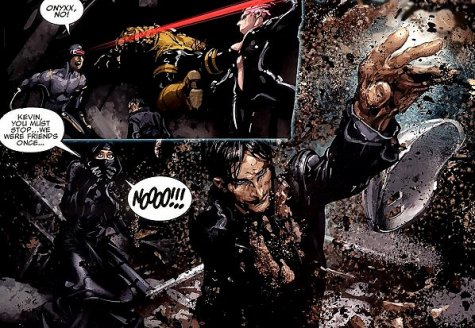 effort to retrieve it from the X-Men on Utopia. He and the rest of Selene’s circle attacked the X-Men directly, bringing Kevin in direct conflict with his former friends and classmates. During the battle, Wither turned his power against Wolverine, dismissed his former teammate Mercury as pathetic and killed Onyxx with his disruptive touch. After successfully securing the spirit blade, Wither and the other members of Selene’s coven returned to Genosha, where Selene was busy harvesting the souls of the millions of dead mutants on the island nation. [X-Force (3rd series) #21-23]

Face to face with their mistress, Bard once again proclaimed his love and begged Selene for forgiveness. Wither mocked him, pointing out that it was he who lost the blade to begin with. Bard attacked Wither, assuming his vampiric form as a sign that Selene had long ago chosen him to

live beside her for eternity. However, Wither sneered at his rival, revealing that Selene had transformed him as well. Before the two could settle their animosity, Selene commanded Wither to “heel.” She heard Bard’s pleas and declared him her greatest love… and her greatest disappointment, before killing him with the spirit blade, much to Wither’s deep satisfaction. [X-Force (3rd series) #24]

Kevin had little time to enjoy Selene’s favor, though. Her plan to ascend to a higher plane of power was rapidly unfolding as she now had all she needed. Yet, Selene did not account for the unexpected arrival of X-Force, who were empowered by the ancient spirit magic of the Apache. As X-Force fought Selene’s followers to a standstill, Wither finally had the opportunity to battle his 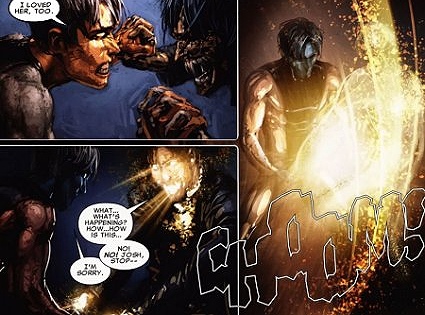 former classmate Elixir, a rivalry that went back to his earliest arrival at the Xavier Institute. As the two mutants clashed, Kevin unleashed his fury on Josh. He irrationally blamed him for Wallflower’s death and swore to kill him. However, Elixir’s power to preserve life proved greater than Wither’s power to take it. The resulting feedback between their powers turned Wither’s decaying touch back upon him and he was killed, the final victim of his deadly mutant power. [X-Force (3rd series) #25]

In time, mutants would congregate and unite behind one flag, as the X-Men formed a mutant nation state on Krakoa. Furthermore, a quintet of mutants (including Elixir) came together under Xavier's guidance as the Resurrection Five, able to fully restore dead mutants to life, in body and in mind. Wither was among those mutants resurrected, and he came to live on Krakoa at the 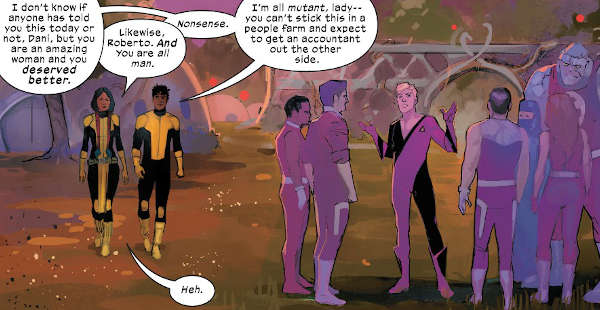 Akademos Habitat among other Hellions new and old. The Krakoa state was truly revolutionary, as even Selene came to live under Xavier's direction. It remains to be seen whether Wither will peacefully acclimate among his former friends, or if all old wounds don't heal with time. [New Mutants (4th series) #1]