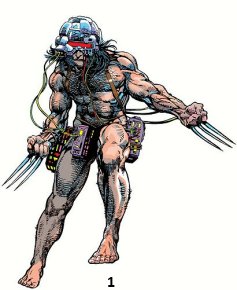 1) As Weapon X, Logan was truly just a wild man and a puppet in the control of the program. His nervous system was rewired through a series of cables and power pack batteries that were strapped around his naked waist. These acted as an elaborate control system for Logan -- he was completely insensate when their power was off, and wired only to receive commands from Weapon X's control terminal when the batteries "activated" him. He was also outfitted with a helmet, a bowl-shaped metal dome with a red visor that served to increase the signal range and reception of the control system. [Marvel Comics Presents (1st series) #72]

-) As a member of Team X, Wolverine wore a uniform that consisted of a full black bodysuit with gold shoulder armor, straps and accents. He also wore a gold helmet. [X-Men (2nd series) #5] 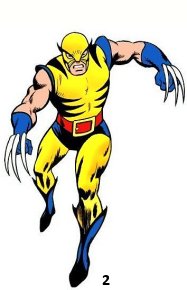 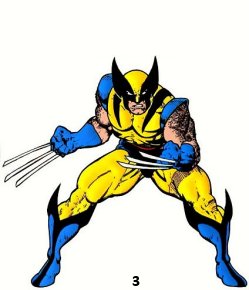 2) Wolverine's first costume was primarily yellow with blue trunks, gloves, and boots with a black line down them and a flared 'V' cut in the front. He wore a red belt with a buckle, had sleeveless arms with raised blue lining on the shoulders, and three black cuts on either side of his chest and one on either side of his neck, resembling claw marks. His original mask was a yellow skullcap, with black lines resembling whiskers on the front, and small "ears" of black fabric shooting up on the sides of his head. [Incredible Hulk (2nd series) #180]

3) Wolverine quickly ditched the whiskers and switched to his more classic mask, with much larger and more pronounced black points extending over the eyes of his mask and into high points, much like his hairstyle. As an X-Man, his belt sometimes included an X symbol. [Giant-Size X-Men #1] 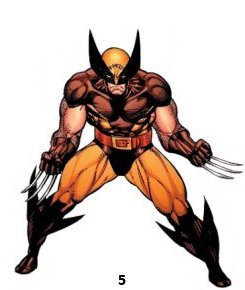 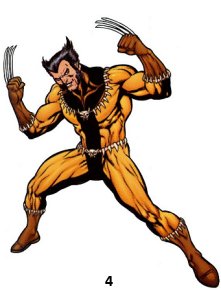 4) While battling the Shi'ar Imperial Guard, Wolverine squared off against the feral alien Fang. After defeating Fang, Wolverine stole the alien's costume as his own had been reduced to tatters. Though he only wore the stolen costume for the remainder of this adventure, Logan soon adopted the color scheme as part of his standard uniform. The Fang costume features a tannish gold bodysuit with a broad dark brown stripe that runs from the crotch to a round yoke around the neck. This yoke is accented with what appears to be a string of teeth or claws. In the center is a tiny alien skull. This motif is repeated in the belt. Short brown boots and gloves with the string of teeth/claws around the edge complete the look. [X-Men (1st series) #107]

5) His second X-Men costume was very similar in design, keeping the same style of boots, the red belt, sleeveless shirt, and basic mask design. The costume was now primarily tan with brown trunks, gloves, and boots. Instead of the claw marks, his costume top now had a brown portion extending down to a point at his belt, with tan portions visible on the sides under his arms. The mask was now primarily brown as well, with only the top of his skull over the eyes colored tan. [X-Men (1st series) #139] 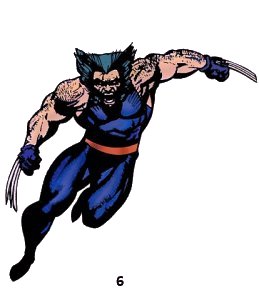 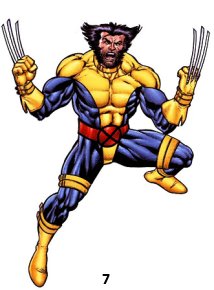 6) While operating alone in Madripoor and the Far East, Logan tried to distance himself from his "Wolverine of the X-Men" identity, adopting an eye patch and the name Patch as well. When prepared for a fight, he wore a sleeveless midnight-blue bodysuit, with black gloves and a red belt around his waist. He also had a strip of camouflage paint drawn across his eyes. [Wolverine (2nd series) #1]

7) After the X-Tinction Agenda, the X-Men all came to dress in a single kind of team uniform. Like his teammates, Wolverine now wore a modified version of the original X-Men costume -- a blue bodysuit with a yellow stripe extending up his midsection and expanding upwards to cover the top half of his chest, along with his neck and shoulders. He also wore a red 'X' belt, yellow gloves and yellow boots, each held tight with a pair of straps. [Uncanny X-Men (1st series) #273] 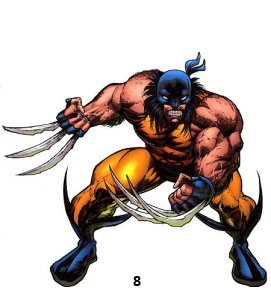 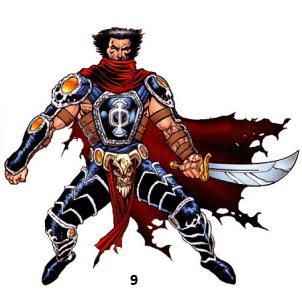 8) When his feral regression overwhelmed Logan, his facial features distorted considerably and he grew additional tuffs of hair from his shins and forearms. He altered his costume at this point, adopting a ripped-up version of the X-Men's previous team uniform torn off at the shoulders to be sleeveless and the boots and leggings ripped off below the knees. He also wore a fingerless set of blue gloves and a bandana-style mask over his bestial visage. Wolverine would later employ a red bandana as well, and wear a tattered version of his personal blue and yellow costume with it. [Onslaught: X-Men]

9) Upon being transformed into the Horseman of Apocalypse known as Death, Wolverine began to garb himself in an armor based on the Riders of the Dark employed by En Sabah Nur centuries earlier. His armor is primarily blue, covering him from the neck down and decorated with gray trimming over most of it. His arms are covered by epaulets and gauntlets of the same design, held on by brown straps. Another set of straps hold a metal chest plate onto the front of his armor. His belt is adorned with a goat's-head buckle on the front. Finally, he has a cape of red cloth that extends up and wraps around his face, leaving only his eyes visible. [Astonishing X-Men (2nd series) #1] 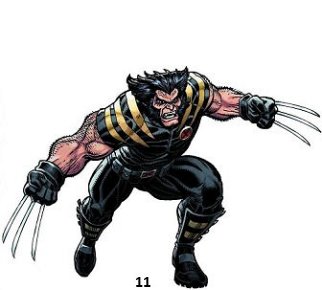 10) When Xavier reimagined the X-Men's role in mutant relations, he temporarily reversed his idea of "super-hero" costumes. Wolverine took to wearing regular black boots and black leather pants, held up by a metal belt and 'X' buckle. His black leather jacket had yellow 'X' symbols on the shoulders and two yellow stripes on each sleeve. He wore the jacket over a plain white wife-beater shirt or nothing at all. [New X-Men (1st series) #114]

11) During the time Logan was operating both with the mansion's primary staff and their strike force, he adopted a second uniform he would occasionally wear on missions. This costume was a dark blue-black suit with short sleeves and a yellow claw mark design on either side of his neck. The sleeves were reverse-colored, primarily yellow but with a blue-black claw mark on them. He had a red and black 'X' symbol on his left breast, and a brown belt tied with another 'X' as the buckle. He also wore black gloves and black combat boots. [Uncanny X-Men (1st series) #423] 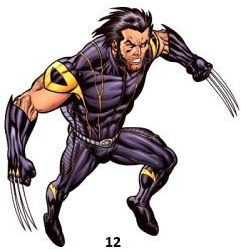 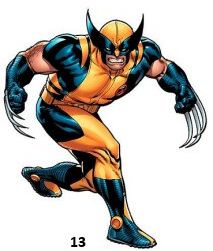 12) When Logan and other heroes were tapped by Nick Fury to take on a vital covert operation, th

ey all adopted stealthier versions of their classic costumes. In Wolverine's case, this was a sleeveless black bodysuit with ribbing down the side of the torso and legs. This was set off by yellow accents at the shoulders, yellow piping down the front of the chest and jagged yellow marks at the calves. He also wore black gloves that had points where they reached the elbow and a simple silver belt. [Secret War]

13) After the X-Men returned to the public eye as super-heroes, Wolverine adopted a modified version of his classic yellow-and-blue outfit. The mask, boots, and gloves were virtually the same as his old costume. The sleeveless tunic was flared at the shoulders and predominantly blue, with a thick yellow stripe down the center, three yellow claw "slashes" on each side of his stomach, and a similar slash descending from either side of his neck. The central stripe extended down past his belt, making his pants mostly yellow, with small portions of blue isolated on the outside of his thighs. Over time, this costume has been tweaked slightly. The boots and gloves have varied, some with a ribbed detail and sometimes with simple combat style boots. The X symbol has migrated from the belt to the left side of the chest on occasion. [Astonishing X-Men (3rd series) #1] 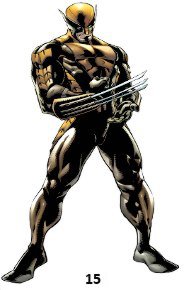 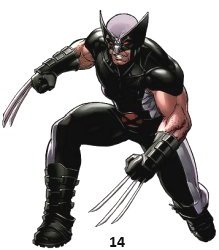 14) When Cyclops and Wolverine restarted X-Force, the team all adopted secondary uniforms, decked out in gray and black for stealth missions. Logan’s suit was a monochrome version of his standard costume, with red-glowing infrared lenses in the mask. [X-Force (3rd series) #1]

15) After losing his healing factor, Logan had a new armored costume designed for him by the Superior Spider-Man. This ablative armor was flexible but extraordinarily resistant, supposedly able to absorb the force of a small nuke. The armor was tan and black, representing a large black 'X' design draped over Wolverine's body, with tan armor plating peeking through underneath his neck and along his sides. He had similar tan armor plating along his arms. Artists depicted Logan's claws in the armor in different ways. In some cases, it appeared as if the claws were not coming from his knuckles, but from housings on the back of his gauntlets. Since losing his healing factor meant Wolverine was injuring himself every time he popped his claws, it's possible the armor was designed with artificial claws to avoid this. However, this was never specified. [Wolverine (6th series) #1]