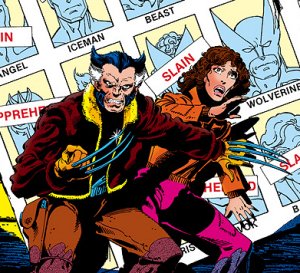 In the Days of Future Past timeline, Wolverine was the only X-Man still free, working for the Canadian Resistance Army. At one point, he worked with the aged Magneto, Jubilee, and his now-adult adopted daughter Amiko (aka Midnight) to prevent Shinobi Shaw from destroying the world with his Cataclysm Engine. What happened to this rebel cell is unknown but after some time passed Wolverine remained free but alone, suggesting his allies all met unpleasant fates.

As part of a desperate ploy to alter the timeline, Logan smuggled pieces of a jammer device into the mutant concentration camp through Kate Pryde, which they used to make their escape. He then led the surviving X-Men, Storm and Colossus, to the Baxter Building where they engaged the Sentinels at the heart of their own headquarters. Arriving at the top floor, Logan had Colossus toss him at a Sentinel, only to have it spin suddenly and burn the flesh from his bones with an energy blast, leaving him dead as nothing more than a sizzling Adamantium skeleton.

This version of Logan was pulled out of time twice in his final moments. Once, he was recruited into a team of Wolverine Exiles by the Time Broker along with several alternate versions of himself. Apparently restored to his timestream moments before his death, Logan's smoldering Adamantium skeleton was recovered by X-51 the Watcher of another reality and restored to life using Merlyn's technology. The full accounting of these two realities can be found below. 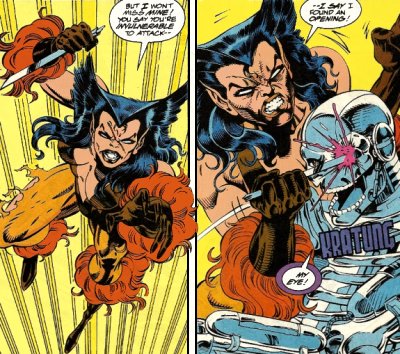 In the 21st century, a future reality that was home to the Guardians of the Galaxy, the Sentinels had been fully implemented to destroy mutantkind. To escape their fate, Wolverine and many of the mutants of that time agreed to leave Earth under Magneto's command and settle a new homeworld somewhere else in the universe. Before traveling into other galaxies, they first stopped at Jupiter's moon of Europa to build ark ships that would carry everyone long enough and far enough to reach a new world. Unfortunately, Europa was destroyed when Magneto and Apocalypse engaged in a battle that cost them both their lives. After several generations of travel on board their starships, the mutants arrived on a desolate and unstable world capable of sustaining life, and were so low on fuel they were forced to colonize it. Wolverine, the last surviving member of the original mutants who began the journey, helped teach the Havenites to survive and prosper on that harsh world. But while his children took it upon themselves to rule their people, Logan did not, and somehow managed to return to his homeworld of Earth. What happened after that is unclear, but he was eventually killed by Doctor Doom, and his Adamantium skeleton was removed and converted into part of a cyborg body for Doom's brain. 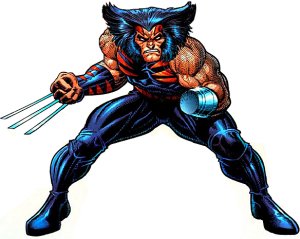 Logan never assumed the name Wolverine in the Age of Apocalypse, preferring to be called Weapon X. He was one of Magneto's original recruits to his X-Men, and quickly became enamored with the young psychic Jean Grey. His life was defined by her for years. He left the X-Men with her, retired altogether after her apparent death, but returned to lead the team after learning of Jean's survival. For a time, however, Logan fell under the influence of a Celestial Deathseed, becoming the greatest villain of his world since Apocalypse. As Weapon Omega, he became Overlord of America, reinstated the human cullings, and even murdered his own daughter Kirika. The power of Apocalypse was eventually stripped from him, restoring his senses. Logan spent his final weeks atoning for his misdeeds by hunting his former lieutenants, until the entire Age of Apocalypse fell before the Celestials' nemeses, the Exterminators.

For further details on this incarnation of Wolverine,
check out the WEAPON X Character Profile! 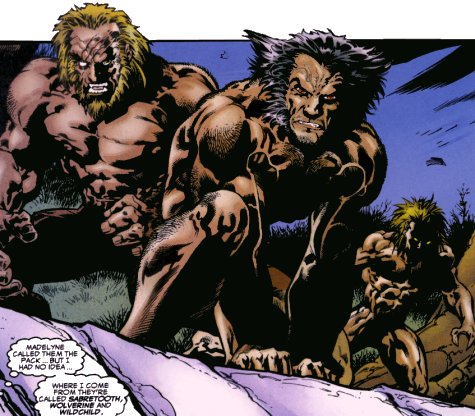 While operating with the Six in the Mutant X reality, our Alex Summers encountered another version of Wolverine. This Logan had developed a romantic interest in Jean Grey much like ours, though here they had a full-on relationship for a time. Still, he ultimately ended up married to Mariko Yashida, living in a cabin in Canada with their children, Brian and Mari. Logan's happy family life was destroyed when he was recaptured by the Weapon X Program, along with Sabretooth and Wild Child. They managed to break free for a time, living in the wilderness as a feral pack, before Alpha Flight eventually tracked them down and took Logan and the others back into custody. Wolverine escaped again and, with the help of Jean Grey and the Six, prevented Creed from killing his family. Their trespass onto Canadian soil almost ignited World War IV between American and Canada, however, and the resulting conflicts only escalate with the returns of Dracula and the Beyonder. Wolverine is last seen taking his family to safety, cutting out on the final confrontations in the series. 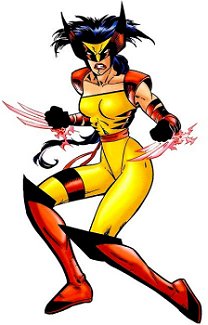 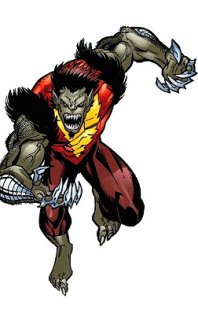 In the future depicted in MC2, the timeline deviated from the 616 universe around the era of the late 90's. In this timeline, Wolverine was the leader of the X-Men when Juggernaut first joined the team, and the two of them clashed repeatedly on team issues. Nevertheless, Juggernaut sacrificed his life on an X-Men mission to another dimension, throwing Wolverine to safety through a portal and staying behind to prevent an invading force from reaching Earth.

Over the next fifteen or so years, Logan eventually retired from active adventuring, taking up residence near Hudson Bay, Canada. His first known child, Hudson Logan aka Sabreclaw, became a mercenary villain to Logan's dismay. His second child Rina was closer to Logan and her mother Elektra, becoming a heroic adventurer named Wild Thing. Despite his retirement, Wolverine occasionally became involved in adventures with his daughter and Zane Yama, the son of the original Juggernaut called J2. 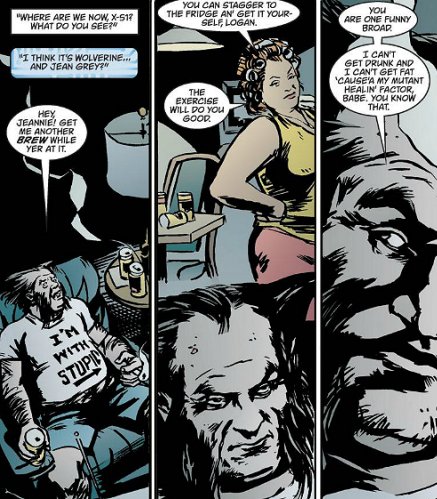 In the Earth X universe, Logan was a “natural human,” descendant from the Tribe of the Moon. The Tribe was a small pocket of early humanity that avoided the implantation of the Celestial Seed when the space gods first landed on Earth, and bred true to avoid acquiring it in subsequent generations. Although primarily residing in the deep wilderness, sometimes members of the Tribe were spotted or captured by humanity at large. “James Howlett” was a foundling child, adopted into his civilized family to replace the true Howlett heir after he died.

Unaware of his origins, this Wolverine became a member of the X-Men and eventually succeeded in winning Jean Grey away from Cyclops. Their relationship soured over the years, though, and Logan grew fat and lazy as things deteriorated between them. Jean eventually walked out on Logan altogether. They briefly reunited months later, where Logan also met a dimension-hopping version of himself from the Days of Future Past reality. This Wolverine had been working with the Watchman, X-51, as a Herald of the Celestials’ plans to all other realities. They had explored Logan’s origins, and both Wolverines learned the truth about being one of the unaltered humanity. Embracing his “animal side,” the Logan of Earth X finally cast aside his efforts to blend in with man’s civilization, and returned peacefully to the wild. 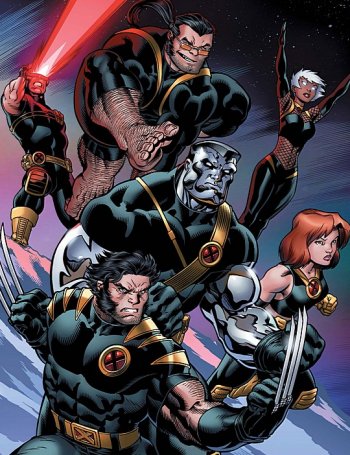 The Wolverine in the Ultimate Universe started as an assassin sent by Magneto to infiltrate the X-Men and kill Professor X. The spark between Wolverine and Jean Grey quickly developed into a passionate affair. When Wolverine genuinely fell for Jean, he betrayed Magneto and joined the X-Men. He served with the team sporadically and like his 616 counterpart, had to contend with a rival for Jean's affections from team leader Cyclops. For a time, he romanced Storm and despite some genuine chemistry, they each had other deeper romantic interests. Wolverine ultimately met his end at the hands of Magneto. In their final confrontation, Wolverine mortally wounded Magneto who then ripped the Adamantium from his body, leaving only a charred husk. He was buried with the other X-Men who fell during this conflict. He left behind a son Jimmy who he had entrusted to Heather and Mac Hudson to raise. Kitty Pryde found the boy and told him the truth of his parentage. Jimmy took up his father's codename and place among the X-Men. 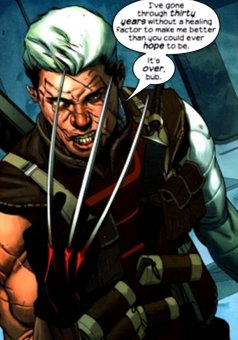 Another version of Wolverine appeared in the Ultimate Universe, a future version who adopted the identity of Cable. Instead of Nathan Christopher Charles Summers, this Cable was an aged Wolverine from the future who had lost his healing factor. He arrived unexpectedly with the intention of murdering Professor X. With ease, he took down all the X-Men, including Jean Grey. But as he battled his past self, the X-Men managed to regroup, so he teleported away with Jean. While Cable rallied his own team including Domino, Grizzly, Hammer and Kane, another visitor from the future arrived at the home of the X-Men - Bishop - whose intention was to keep Xavier alive. A fight followed in which many of the X-Men were injured. The battle ended with Cable succeeding in his mission, killing Xavier. Jean was rescued and Cable and his allies teleported away, leaving a very uncertain future for the X-Men and mutantkind alike.

In the timeline depicted in Wolverine: The End, things ended on a sadder note for Logan. Over 100 years in the future, Logan had been living in seclusion for decades as a mountain hermit. For unexplained reasons, the general mutant public believed Logan responsible for murdering Charles Xavier, although Xavier's spirit secretly remained tied to the physical plane through Logan himself. Beginning to feel his age after two centuries, Logan was also getting paranoid in his retirement, fearing the Weapon X Program would one day return for him. The House of M apparently never happened in this reality either, for Logan's memories were still missing from his mind, or wrapped in a fog. 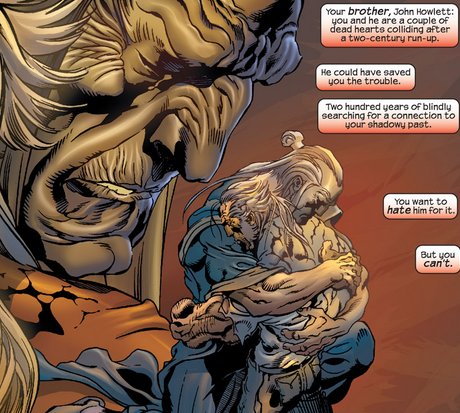 A parting gift from the will of Victor Creed sent Logan on a journey around the world to find the secret organization dogging his every step. He found his stalker, but it wasn't Weapon X -- it was Kitsunebi, the White Ghost, also known as John Howlett Jr., or Logan's elder brother. Howlett at first attempted to recruit Logan, then tried to kill him when Logan refused to join Howlett in his criminal empire. The brothers ended up battling to the death in Las Vegas, and Logan killed John to prevent him from carrying out his bombing threat on the city.