• Kemteron prince with superhuman
strength, speed, agility, endurance,
and reflexes, greater-than-human
lifespan, the ability to project light from his hands, and
ornamental bone fragments that rise from his skin and can be animated as lashing blades 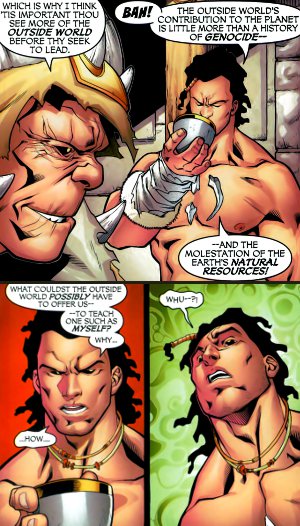 As son to the chief of their people, Yukotujakzurjimozoata was heir to the ancient sovereign nation known as Kemteron, a society and people situated deep within the Canadian wilderness that had remained untouched by the outside world. Intensely arrogant, Yukotujakzurjimozoata believed himself adored by the citizens of his home and was completely unaware that, to the contrary, his acerbic personality caused him to be intensely disliked. One evening while out frightening hunters away from a deer, Yukotujakzurjimozoata was approached by the super-hero Sasquatch, who was assembling a new Alpha Flight team to rescue the original and prevent an alien invasion. Yukotujakzurjimozoata was invited by the founding Alphan to join his new team, but the youth declined the invitation, being perfectly happy living in Kemteron.

Nevertheless, Yukotujakzurjimozoata's father, Makkamakkamaktsptoo, realized that his only surviving offspring would be the next ruler of Kemteron and wanted his son to experience the outside world before that happened. Yukotujakzurjimozoata soon found himself drugged and taken out of Kemteron by Sasquatch, who had paid Makkamakkamaktsptoo for his son's services as a member of Alpha Flight. The elderly ruler was not too concerned with whether or not his son returned safely, just that he grew up a little. [Alpha Flight (3rd series) #1-2] 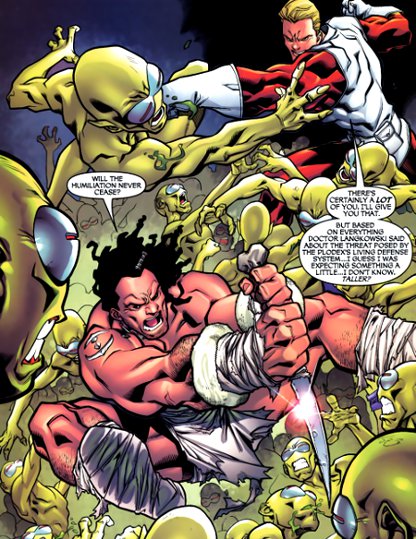 Yukotujakzurjimozoata was dubbed “Yukon Jack” by Sasquatch and the All-New, All-Different Alpha Flight had little time to train and get to know each other, as they quickly needed to find the missing Alpha Flight members and stop the savage alien race known as the Plodex from enslaving Earth. Yukon Jack was partnered with the new Major Mapleleaf, but had no interest in making small talk with the eager hero. When the men arrived at the Plodex base, Yukon Jack was able to demonstrate one of his mystical abilities – the power to generate his own source of light. During the mission, Yukon Jack and Major Mapleleaf had an unexpected encounter with the Mole Man and were captured by his Moloids. However, when they explained that they were seeking the Plodex, they were released. [Alpha Flight (3rd series) #4]

Yukon Jack and his teammates soon encountered Plodex copies of the original Alpha Flight, who wanted to capture the new Alphans and use their genetic material to make copies of them, too. A battle ensued in which Yukon Jack fought the Plodex copy of Shaman. However, when the Plodex copy of Snowbird transformed into an ookpik, Yukon Jack found himself unable to raise his hand against the intensely adorable creature, so Sasquatch took care of the Plodex copy. The fledgling team's mission continued when they located a large nest of Plodex eggs and the real original Alpha Flight. [Alpha Flight (3rd series) #5]

Confronted with the enormous hatchery of Plodex eggs, the new Alpha Flight were conflicted as to what they should do and debated whether to destroy the eggs before they hatched and turned to savage aliens enslavers, or risk the possibility of the eggs hatching and developing into free-thinking beings. Yukon Jack was adamant that the eggs should be destroyed, not wanting to gamble his own people on the possibility that the aliens may become good. 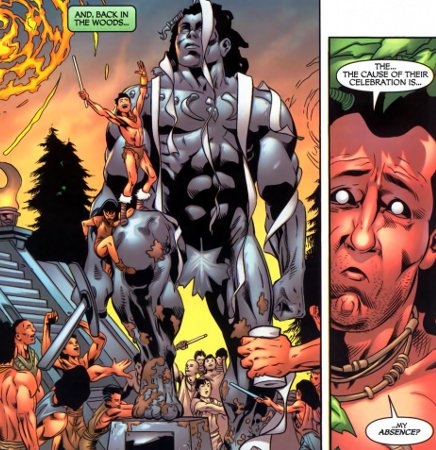 Taking the Plodex base as their new headquarters, the new Alpha Flight soon realized that they actually had matters in their personal lives to tend to.
Yukotujakzurjimozoata
returned to Kemteron, only to discover much frivolity and celebration in his absence. Keeping to the trees of his kingdom, the warrior-prince was shocked to discover that the cause of the joy was his absence.

Dejected, Yukon Jack returned to Alpha Flight's new base and then assisted his teammates against the Manimator. [Alpha Flight(3rd series) #7-8]

Alpha Flight's next adventure involved time travel, their first in fact, with former associate Flashback requiring their help to avoid his own death. The mission was very convoluted but, for Yukon Jack's part, when he was sent to the past, he fought with the original, villainous Omega Flight for a short time and demonstrated a strange power involving bone fragments. In the aftermath of the bizarre time-travel adventure, Alpha Flight was once again restructured, with many of the original members re-joining the team. Yukon Jack departed Alpha Flight, however, striking up a relationship with Snowbird. In undetailed events, the two were married and retired to Kemteron. [Alpha Flight (3rd series) #9-12]

However, it was not all happily ever after for Yukon Jack, for his marriage soon ended. When Sasquatch was forming a new Omega Flight team in the wake of the restructured Alpha Flight's slaughter, it was mentioned that Yukon Jack was not available, due to the neurological damage he sustained as a result of the time travel adventure. Sasquatch tried to help Yukon Jack, but apparently to no avail. Snowbird herself confirmed that her marriage was over, but elaborated no further. Considering the situation, reasons could have related to Yukon Jack's neurological damage, or perhaps because of the survivor's guilt that overcame Snowbird after the death of most of her teammates. In any case, the damaged Yukon Jack presumably resides in Kemteron with his people. [Omega Flight #1, Incredible Hercules #117]