The Hellfire Club in London is a branch of the New York Hellfire Club, a traditional and powerful organization with roots way back into the last century. Membership is passed on to descendants, or can be earned through wealth and influence. Originally the Club was not about mutants. The Club has many members (ancestors of Worthington, Braddock, and more). Unknown to most members the clubs are ruled by the Inner Circles. Positions are named after chess pieces. In the London Club they changed the opposing colors to red and black (instead of white and black) to distinguish themselves from their New York successors. 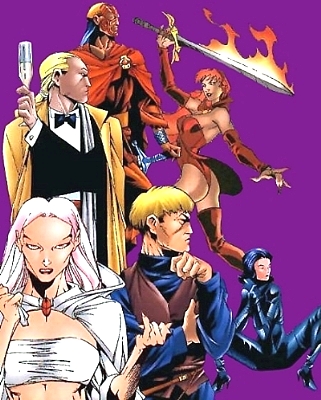 Powers: Materialize psionic skinning” blades, which can trigger or disable specific areas of the human brain to cause paralysis, severe pain, muscular spasms, brain damage, or send her victims into a coma.

Fact: In the Age of Apocalypse Ms. Steed had a counterpart called Damask, who appeared in X-Calibre #1-4

Powers: Margali is a sorceress of the Winding Way whose power waxes and wanes over time. At her peak she can summon such powers as teleportation, illusion casting, shape changing, mystical force bolts, hypnotism, and the manipulation of other magical forces.

Powers: Augmented strength, agility, reflexes, and phasing power that allows her to assume an ephemeral state.

Note: Scribe’s real name was only revealed in the Marvel Handbooks.

Powers: projects a basilisk field that slows the reflexes and reaction time of anyone nearby, Emplate heritage enables him to merge bodies with another person, becoming a “silent partner“ by entering another’s body and taking command of their consciousness and facial features, or performing a “hostile takeover” in which he absorbs another body into his own, sustaining himself on their life energies while temporarily having access to their powers and memories until they are completely divested through his system

Powers: swordsman, unknown if mutant or not

Powers: Inherent ability to tap the Omniversal energy matrix that is native to the British Isles, increasing his strength, endurance, and reflexes to superhuman levels, rendering him invulnerable to injury, and enabling him to fly. His Captain Britain Corps uniform broadcasts his power source to him whenever he is away from England and generates a force field that further increases his resilience and can be directed into concussive energy strikes. Without his uniform, Brian's powers fluctuate and fade when he is away from England.