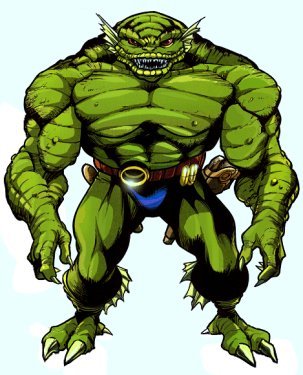 The Timorians are an amphibious, lizard-like species that lives on the planet Timor in the Varanus IV system somewhere within the Shi’ar Empire. They have a thick, scaly, green hide, black eyes with red pupils and fin-like appendages on the sides of head, forearms and back of their calves. Each hand only has four fingers (including thumb) and the three toes on each foot are equipped with claws. The Timorians possess superhuman strength and can breathe both on land and under water.

Despite their monstrous appearance, the Timorans were once a race of scientists and philosophers. However, that changed when the Shi’ar occupied their solar system and forced the Timorians into joining their empire. Because of their physical attributes, the Shi’ar pressed the Timorans into service as mercenaries. While not confirmed, it has been stated that the Timorians have been exterminated, as the Starjammer Ch’od is the last of his kind. Nevertheless, some of them could still be alive, either working for the Shi'ar or in some prison colonies.

Current Status: Ch’od, the only known member of this race, was banished from his people and sent to the slave pits on Chandilar, after he killed his commanding Shi’ar officer who had ordered him to burn down a village composed entirely of women and children. Arrested and locked away for life by the Shi’ar, he eventually met and escaped with those who would become his fellow Starjammers. With his new allies, Ch’od embarked on a life of piracy against the Shi’ar.