The D'Bari were a civilized and peaceful race that was part of the Shi’ar Empire, living on the fourth closest planet to a star of the same name. The D'Bari are slightly smaller in size than the average human, with green skin and dark green, string-like hair. They also have two sets of gills that are on either side of their face. The aliens appear to be botanic in their biology and can breed both sexually and asexually, the latter by budding. As one D’Bari was observed living on Earth for 2500 years, they seem to have a very long lifespan. 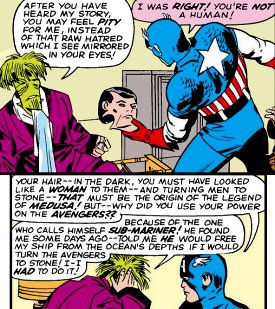 Many centuries ago, a D'Bari ship crash landed on Earth into the ocean. Its lone passenger survived, but he was stranded as his vessel was sank beneath the waves and became imbedded in the bottom of the seafloor. Having no means to free the craft, the D'Bari tried to get help from the native humans, but they feared his strange appearance. Whenever someone got too close, the D'Bari used a ray gun that temporarily turned its target to stone. The ancient soldiers mistook the alien for a woman because of the long, green hair and thus the Greek myth of Medusa was born. Much later in the 20th century, the Sub-Mariner approached the D'Bari and offered to raise the ship, in turn for the alien using his gun on Namor's enemies – the Avengers. The D'Bari did as instructed but he had not been warned of the Avengers new ally, the just revived Captain America. The newest Avenger hunted down the D’Bari and made him undo the effects of the stone ray. As he meant them no real harm and was only searching for a way home, the Avengers helped to rescue the craft and, after some quick repairs, the D'Bari returned home. [Avengers (1st series) #4] 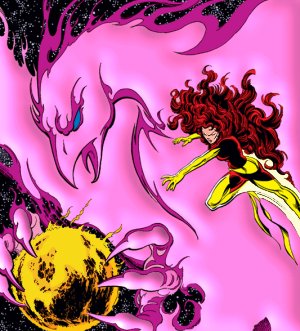 The “Medusa” D’Bari joined with a group of Xartans, a.k.a. Carbon Copy Men, in space. As the Xartans were in hiding from the Skrulls, they copied the “Medusa” D’bari’s appearance to hide from them. When the Skrulls attacked, the D’bari overloaded his weapon and petrified the entire planet and everything for 100,000 miles. [She-Hulk (2nd series) #43-46]

Only a few years later, the D’Bari homeworld was destroyed when the Dark Phoenix consumed their system's sun, causing it to turn super-nova and destroying all planets in the system. Five billion D'Bari were killed, save for a few that were off the planet during the attack. [Uncanny X-Men (1st series) #135]

Some of those D’Bari that survived the destruction have been seen around the universe over the years. A pair of D’Bari, a father and son, were seen on a prison planet where the Collector had relocated several nearly extinct species. The colony was destroyed by Galactus, though the D’Bari were rescued by the Starjammers.

Another D’Bari was seen as a member of the Nova Corps but was later killed. Another surviving D'Bari assumed the identity of Starhammer and, during the Maximum Security crisis, came to Earth to kill Jean Grey in revenge for what the Dark Phoenix had done.  [Wolverine (2nd series) #136-138, Nova (2nd series) #15, Uncanny X-Men (1st series) #387]

Current Status: Unknown
Surviving the destruction of his world and donning a powerful, weaponized-armor, an unnamed D’Bari took the name Starhammer. He allied himself with the former Imperial Guard members Hussar, Neutron, Warstar and Webwing. Tried and convicted for treason, the four were sentenced to stay on Earth, as the entire planet had recently been declared a maximum security prison by a coalition of stellar empires. The group attacked Jean Grey of the X-Men in retaliation for destroying his world. Whilst fighting with the D'Bari, Jean Grey entered his mind and gave him what he wanted. On the psychic plane, he killed Jean Grey (or believed that he did) and found a way to make peace with his past.