The Technarchy is an alien race from the planet Kvch. Their techno-organic bodies are black with cables, 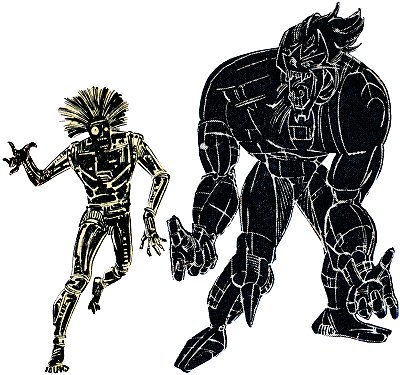 sensors and other surface structures outlined by glowing lines. Depending on the power status of the being, these lines glow bright white, yellow or dim blue when the being is nearly depleted.

Their techno-organic nature allows the Technarchy to shapeshift quite rapidly, allowing them to take up nearly any shape and color. In fact, they can use this power to pass off as humans or other aliens. While they can also change their size during their shapeshifting, there seems to be an upper size limit that the Technarchy can't exceed. However, as a Technarch alien grows older and stronger, that size limit seems to increase, allowing them to assume shapes of even planetary scales. The only other known limitation to their shapeshifting power seems to be that they have to stay in one piece.

The Technarchy are also capable of generating holograms, detecting energy sources from great distances and traveling through hyperspace and to other dimensions. Their most dangerous trait, though, is the ability to infect other beings with the 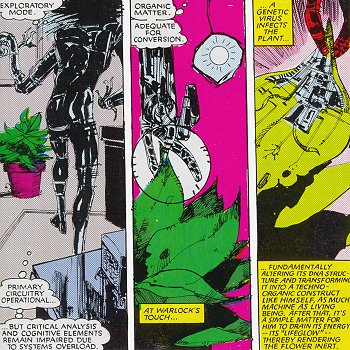 so-called Transmode Virus. This virus converts organic life-forms into "Phalanx", a techno-organic state of being. As this is the Technarchy's way to feed, they usually drain the Phalanx of their energy or "lifeglow", as they call it, leaving behind nothing else but a skeleton structure of circuitry that soon crumbles into a dust. Apparently, the Technarchy gain insight to some of their victims memory during the process.

If left alone, though, the Phalanx continue to exist as a life-form on their own, sharing certain traits and similarities with the Technarchy. However, these Phalanx are considered abominations by the Technarchy, and they exterminate them whenever they learn of the existence of a larger grouping of Phalanx. [see Phalanx entry for more information]

Technarch offspring are not bred, but produced on an assembly line, with apparently a single parent donating his genetic code for each new Technarch that is being created. The infant Technarch are raised in a crèche until they are "decanted" upon reaching adulthood. On that day, the newly born Technarch has to face his father or "siredam", as they call him, in a duel to the death. This ritual is just one example for the Technarch's general harsh and aggressive outlook on life. To them, organic life-forms are nothing else but animals to feed on. However, there's an exception in Warlock; his ability to care for others and to show compassion made him a mutant member of his race. Not willing to combat his parent, Warlock fled from Kvch and eventually made his way to Earth where he joined the New Mutants.

With either parent or offspring dying in the duels, the population of the Technarch must be a stable number as there is a death for each birth. This leads to the assumption that the Technarchy do not die of natural causes or old age, as otherwise their race would sooner or later become extinct. Despite the fact that members of the Technarchy have been repeatedly referred to as males, there don't seem to be different genders and no female Technarchs have ever been mentioned so far.

The Technarchy is a monarchy or a dictatorship, with Warlock's father, Magus, being the current ruler. Apparently, he can only be replaced by his offspring during a death duel. In his lifespan, Magus has spawned several other sons before Warlock, but he defeated and killed each of these princes in combat. Apparently, the one who put up the most challenge is Warlock, the one son who didn't want to battle him, as he and his friends temporarily defeated Magus several times. However, as they refused to kill him, Magus always recovered shortly afterwards and eventually returned to trouble again.

Several times, Magus has been talking about himself and his son as "the Magus" and "the Warlock". Additionally, it has been said that Warlock would become the new Magus after killing his father. It could be the case that Magus and Warlock are rather titles than actual names. Technarchs might not even have individual names at all, just functions or titles that are used to refer to each other.

Apparently, there is no water on Kvch; at least Warlock had never seen a large body of water before coming to Earth. As water is one of the basic elements needed for organic life, the absence of water on this planet might serve as an explanation for the unique race of techno-organic beings that developed there.