The Phalanx are not an autonomous race in the sense of them having their own culture and history or a planet to call their home. Whenever an organic life-form - humanoid, animal or plant - is infected with the Technarchy's Transmode Virus, they are being transformed into Phalanx. It doesn't matter how they contracted the virus - some were accidentally exposed to it, others have been infected on purpose by either a Technarch or another Phalanx and there are even people who acquired the Transmode Virus through genetic manipulation - they all become part of this techno-organic species.

Visually, the Phalanx seem no different from the Technarchy. They have similarly black bodies with yellow outlined sensors, cables and machine-like surface structures. The Phalanx are also able to change their shape and appearance, allowing them to pretend that they are uninfected natives of whichever planet they are on. Unlike the Technarchy, they don't seem to be able to change their size while shapeshifting, or at least not as much. However, the Phalanx are able to compensate for that a bit, as they are able to assimilate inorganic matter to increase their size or replace mass that they have lost during a fight. 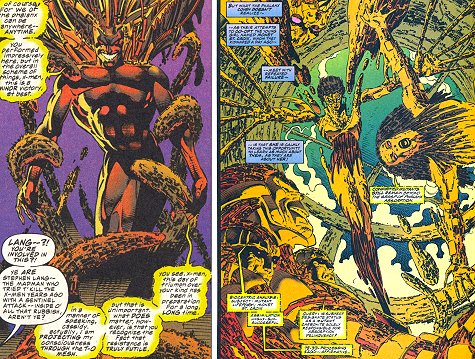 The Phalanx are also able to merge with each other and to separate again, as needed. This is something the Technarchy have never been shown to do and, given their aggressive nature, they probably wouldn't want to merge, even if they were capable of it. While the Phalanx are apparently not capable of traveling through hyperspace, some of them have been shown to teleport. A range limit has never been stated, though it's safe to assume that they can't teleport across inter-planetary distances.

The Phalanx form a hive mind, with a specific device or component in their bodies providing the link to that collective consciousness. Through this group mind, the Phalanx can share and distribute information. Whereas each Phalanx keeps the memories of their prior existence as an organic life-form, and they also display their original personality traits to a certain degree, they are unable to resist the will of collective. Only after the link to the hive mind is severed, are they able to regain full individuality.

Just like the Technarchy, the Phalanx infect other beings with the Transmode Virus, though it's not to feed of them but to add them into their collective. For some unknown reason, though, the Phalanx have found themselves unable to assimilate mutants. 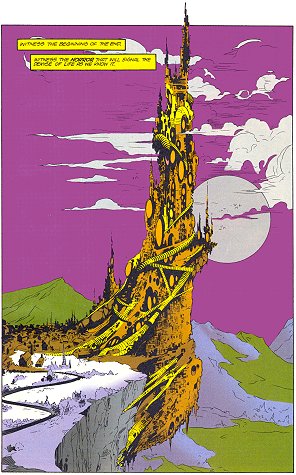 If not stopped, the Phalanx continue to grow and add organic life-forms into their collective until they reach critical mass. At that point, a base-program buried deep within their cells is activated and takes over the collective. Unable to resist their new directive, the Phalanx twine themselves into the Babel Spire, a huge transmission tower that sends a beacon call deep into space, to the Technarchy. When the call is received, they follow the transmission to its source and drain the entire planet of its energies, for they consider the Phalanx to be abominations that can't be allowed to continue to exist.

Although it is unknown whether the hidden base-program is a natural component of the Transmode Virus or was artificially created, it seems to have two different functions. For one, it acts as a failsafe. The Technarchy do not want to lose the advantages that comes along with their techno-organic status, and they sure don't want other species to gain access to their powers and abilities. Therefore, they are alerted to larger groupings of Phalanx creatures, before they become big enough that they could become a serious danger to the Technarchy. Additionally, it seems to be an efficient way to improve the Technarchy's feeding process. Instead of having to hunt down and transform organic life-forms one by one, they happen upon entire planets that have already been partially transformed and are awaiting to have their energies being drained by them. [all information from Excalibur (1st series) #82, Uncanny X-Men #312-313, 316, Warlock #2, 7-8]

On Earth, the Phalanx were created through artificial means. Following Warlock's death at the hands of Cameron Hodge, the Genoshan government sold some of his remains to a group of mutant haters, the "Friends of Humanity." They extracted the Transmode Virus from Warlock's cells and used it to infect a number of volunteers, to turn them into some kind of ""sentient living Sentinels."" To monitor and control the actions of their techno-organic soldiers, the Friends of Humanity needed a human mind to act as an interface with the techno-organic collective intelligence. For that purpose, the "Friends of Humanity" abducted Dr. Stephen Lang from a mental asylum. His well-known hatred for mutants and his previous association with the brain net of the Sentinels' Master Mold made him the best candidate for this task. His deranged mental condition was considered irrelevant, considering that the channeling of hundreds of thought patterns would have driven him insane anyway. He was aided by Cameron Hodge, one of the first people to be infected with the virus.

Two people who were assimilated into the Phalanx collective against their will were Jean Grey's sister, Sara, and the corpse of Archangel's former lover, Candy Southern. Even though both women struggled not to be fully submerged, the Phalanx apparently managed to gain some vital information on the X-Men's headquarters from them. As they couldn't infect them with the Transmode Virus, the Phalanx attacked Xavier's mansion by surprise, capturing all present X-Men and replacing them with a group of shape-shifting Phalanx. They wanted to use the mansion's database on genetics and mutant physiology to come up with a way to overcome their problems to infect mutantkind. While doing so, they happened upon a list of new mutants that Xavier hadn't contacted yet, and they set out to kidnap them and use them as test subjects. Returning from a leave of absence, Banshee happened upon the imposters and, after recruiting Emma Frost from the mansion's infirmary and Sabretooth from a holding cell in the basement, they planned on protecting this next generation of mutants together with Jubilee.

Alerted by Banshee's team, newlyweds Cyclops and Phoenix teamed up with Cable and Wolverine in order to find and free the missing X-Men, who had been taken to a Phalanx base near Mount Everest. The other X-teams - X-Factor, X-Force and Excalibur - were left to deal with a third Phalanx outpost near a small village in the Swiss Alps. This enclave had grown so big that they were already building a Babel Spire, and it seemed the X-teams were too late to stop them, especially as they faced potential betrayal by two of their own. Weeks before, the Phalanx had resurrected Warlock from his ashes. His personality and core program files overwritten with the memory engrams of the late Cypher, Warlock now came across as a reborn Cypher, apparently infected with the Transmode Virus shortly before his death. Calling himself Douglock, he was allowed into Excalibur, unaware that the Phalanx had allowed him to be separated from their collective to act as a plant.

X-Factor's Forge too fell under the Phalanx' influence; his perception of technology and his intuitive genius allowed him to the Phalanx and their inner workings like no other. Totally awe-struck by this unique life-form, he was easily goaded into aiding the Phalanx. However, a few seconds after the Babel Spire started transmitting, both Douglock and Forge managed to overcome the manipulation and they helped to destroyed the tower. From half a world away, Stephen Lang had realized that he was no longer able to control their actions and that they were a danger to humanity as well. That's why he was actually helping to destroy the Phalanx from within and, all over the world, the members of the Phalanx collective dissolved. [all information from Uncanny X-Men #291, 305-306, 311-313 and the Phalanx Covenant crossover]<

For Earth, the danger of the Phalanx has not entirely passed, though, as there are a small number of techno-organic individuals left, who might start the cycle again, should they begin infecting others with the Transmode Virus. Besides Warlock himself, there are Paradigm and Esperanza Ling, aka Hope. 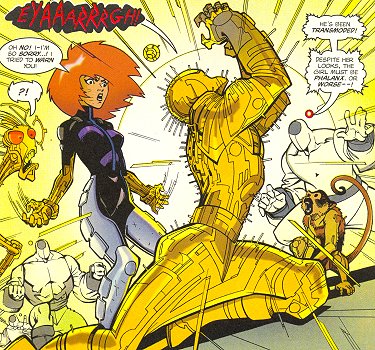 Whereas Paradigm was a Chinese mutant with techno-kinetic powers who was deliberately infected with Techno-organic material to study in what ways it would interact with his abilities, Hope was actually not a carrier of the Transmode Virus. Vacationing in Switzerland by the time the Phalanx made their move, Hope's entire family was assimilated into the Phalanx collective. Hope was spared that horrible fate because of her being a mutant, even though she was unaware of it. Originally gifted with a transmutive power that allows her to transform solid matter into various forms of inorganic matters, the trauma caused her to manifest it as everyone or - thing that she touched being turned into Phalanx. In fact, she believed herself an uninfected carrier of the Transmode Virus for quite some time, until her powers were fully examined by Moira MacTaggert. While she made some progress to control her powers, she might still accidentally turn others into techno-organic creatures.

Additionally, several groups and companies have collected some techno-organic material to further study it, despite the dangers that come along with it. For example, A.I.M., the Mainspring Corporation and the British covert organization known as Black Air have been shown to be in possession of Phalanx samples. [all information from Cable & Deadpool #11-12 , Excalibur (1st series) #90, X-Force (1st series) #89 and Warlock #1-9]

Earth is by far not the only planet to have come in contact with the Transmode Virus. For example, the aforementioned techno-organic material in the possession Black Air is actually a decapitated head of a Skrull, who was partially transformed into Phalanx.

Assimilating the knowledge and technology of numerous alien races into their collective, the Phalanx in space had perfected their forms. Their bodies now entirely pitch black, except for a few red and blue glowing sensor slits, they only displayed the basic Phalanx and Technarchy 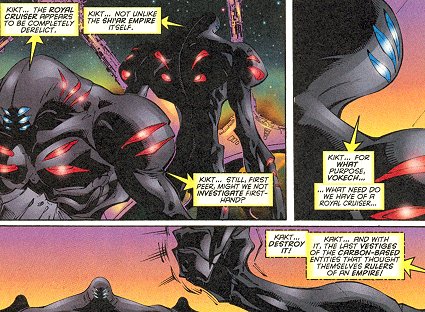 features while shapeshifting or when they were damaged. Additionally, they considered themselves the "pure" Phalanx, compared to such sects like the one on Earth that had only the experiences of one planet at their disposal. As the space Phalanx knew of the Phalanx on Earth and their encounters with the X-Men, it were apparently they who received the transmission beam of the Babel Spire in Switzerland.

A certain number of the space Phalanx even made their way to Chandilar, the throneworld of the Shi'Ar Empire. There, they tried to assimilate the breeding chamber, where all Shi'Ar eggs were being nurtured. Had they succeeded, the entire next generation of Shi'Ar would have become part of the Phalanx collective. However, a small team of X-Men arrived in the nick of time and, even though they were severely outnumbered, they were able to stop the techno-organic foes. The Beast developed a device that would emit a certain frequency to separate the organic from the technological part, causing all Phalanx within its range to dissolve.

The few techno-organic creatures that survived traveled to another planet, where they intended re-built their collective by infecting numerous of the planet's inhabitants. However, their actions were eventually recognized by the Technarchy, and the Magus himself drained this entire enclave of Phalanx of their lifeglow. [all information from Cable (2nd series) #16, Excalibur (1st series) #90, Uncanny X-Men #342-344, Warlock #7-8]