When the Canadian parliament shut down their superhero training program due to budget constraints – most members of the Beta and Gamma Flight training squads found themselves abandoned, without purpose or place to call home. Jerome Jaxon, who had carried a grudge against James Hudson for an entire decade, seized the chance to recruit these super-powered individuals into Omega Flight. Their mission statement was quite simple - take down Hudson and destroy Alpha Flight. 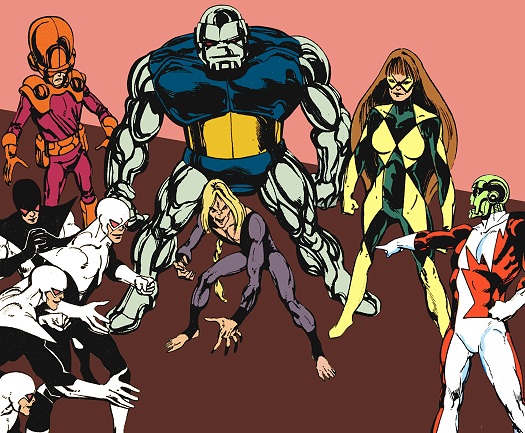 Powers: gynoid designed by RoXXon Oil with superhuman strength and reflexes, an open-ended deduction capacity, and an influencer device that affects the human brain to heighten negative emotions or bend their thoughts to her control
- formerly wore a version of the Guardian battle suit that allowed her to manipulate electromagnetism into concussive bolts, funnels of plasma energy, and an inertia-dampening force field, levitate and propel herself along magnetic ley lines, and place herself at rest with the Earth’s rotation to launch forward at high speeds

Powers: operated a robot made of "living metal" via cybernetic headset, giving him tremendous strength, reflexes, and an indestructible armored hide