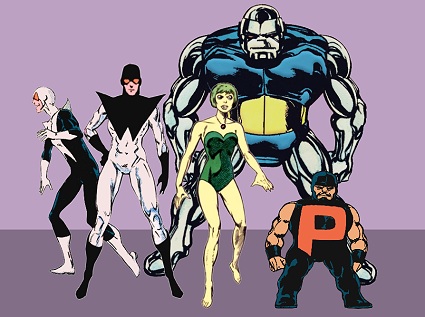 First appearance: none [The group was never shown in action, but mentioned several times by its former members and their allies. Illustrative images depicting the team’s roster can be found in Alpha Flight (1st series) #1 and #51-52]

There are no documented missions of Beta Flight. Apparently, during their time with Department H, Beta Flight’s various members were training both individually and as a team to hone their unique powers. Some of them made good progress and eventually Puck and Marrina were deemed fit enough to move on to Alpha Flight. However, around the same time, the Canadian Prime Minister shut down the entire Flight program because of budget constraints. Alpha Flight had made their public debut only several weeks before but, during their first battles, they had caused damages amounting to several million dollars. As a result, the parliament felt that super heroes were a luxury the government could no longer afford. [X-Men (1st series) #140, Alpha Flight (1st series) #1]

All Beta Flight appearances: none

Powers: operates a robot made of "living metal" via cybernetic headset, giving him tremendous strength, reflexes, and an indestructible armored hide