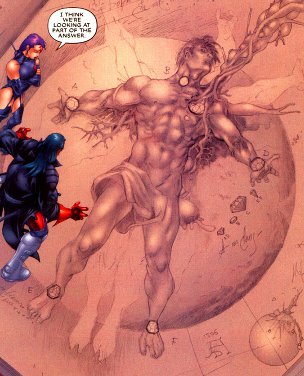 The Madripoor Set is a collection 6 ancient gemstones, linked to an ancient Temple in the jungles of Madripoor. The history and origins of the set were shrouded in mystery, though references to the powers of the set were found at the ancient temple and recorded by Destiny in her diaries. In her diaries, Destiny recorded an image of Gambit crucified to a globe with the six jewels holding him in place, one gemstone on each wrist and ankle, a ruby gemstone placed on his throat, and the diamond placed over his heart.

It was stated that the gems contained a terrible power within, and that according to legend, were capable of terrible acts of destruction. It was reported that the last time the gemstones were brought together the lands of Atlantis fell beneath the sea. It was also believed that with the right training, it was possible for someone to gain the ability to use any of the gemstones to open a portal between dimensions.[X-Treme X-Men (1st series) #4]. 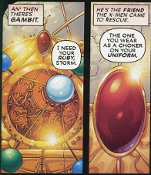 For reasons only known to them, the Thieves guild were wary of the power of the Madripoor set, and took an interest whenever someone came into possession of one of the gems. In the event someone showed an interest in collecting the gems, the Thieves guild would look to steal them to make sure they where never brought together. As a member of the Thieves guild, Gambit was aware of the gems and was actively looking for them and when it was revealed that someone had been able to acquire three of the gems, Gambit felt it necessary to act. While in Australia with a team of X-Men, Gambit broke into the apartment of the Viceroy and stole one of the gems. Having found out that Vargas held the Diamond gemstone, Gambit broke into his mansion. Although Gambit was confronted by Vargas and his body guards, Vargas decided to hand over the diamond to him without a fight. [X-Treme X-Men (1st series) #4, #8]. 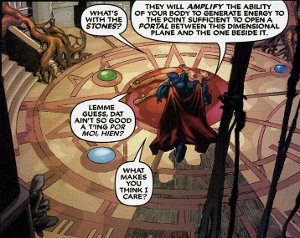 Gambit knew the location of the final ruby gemstone. This gemstone was owned by Storm, having been been passed down through her family for many generations, in fact she had worn the gemstone as part of her uniform since she first joined the X-Men. Although surprised to hear about its roots to Madripoor, she was aware that the ruby had some unusual properties and abilities, having been shown by the other dimensional friend, M'Rin [Classic X-Men #22, Uncanny X-Men Annual #12].

Unbeknownst to Gambit, Shaitan, an alien from another dimension, had acquired the other three gemstones and attacked the team of X-Men that he and Storm were with in Australia in an attempt to complete the collection. Storm gave Gambit the Ruby, hoping that he could escape with it while the team distracted Shaitan, however, Shaitan was able to grab hold of Gambit and teleport away, appearing at the Ancient temple in Madripoor.

In a cruel twist of fate, capturing Gambit was part of Shaitan's plan. Tying him to the altar in the temple, and the gems placed on him like the drawing in Destiny's diaries, Gambit was actually the power source for a dimensional bridge, to allow Shaitan's leader, Khan, access to our universe to conquer, just like he had done on countless other dimensions[X-Treme X-Men (1st series) #10].