Madripoor is a small island principality roughly located between Singapore and the island of Sumatra in the Indonesian archipelago. The island is roughly 100 miles in diameter with a coast pockmarked with deep water bays and inlets. The majority of the island is covered in jungle and because so little land is cultivatable, Madripoor is dependant on imports for everything.

On arriving in Madripoor for the first time, Doug Ramsey referred to it as "Earth's Mos Eisley" or a "Modern day Tortuga". Fans of the Star Wars will recollect that Mos Eisley was the spaceport where Ben Kenobi told Luke "You'll not find a more wretched hive of scum and villainy." while Tortuga is an island in the West Indies which was a known refuge for pirates in the 17th century. Just like Tortuga, Madripoor, has been considered a sanctuary for pirates and up until recent times was run by descendants from the freebooters that settled on the island. 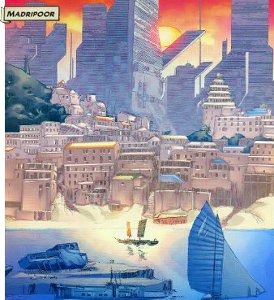 Around the 15th century, the Madripoorian Royal family claimed the secluded port of Madripoor for themselves, and began using it as a base for piracy and plundering of ships passing through the area. It is believed that around the 19th century The Royal family, rich with their piracy plunders, gave up piracy, and started to build the city of Madripoor into the bustling port that it is today [Amazing Fantasy (2nd series) #8].
The society and living conditions in Madripoor are an exotic paradox. While the city lays claim to the most luxurious and expensive hotels in the world, it also possesses one of the most severe pockets of poverty on the planet. It is estimated that there are well over 1,000,000 residents within the city [Wolverine (2nd series) #10].

With such a large numbers of residents, there is bound to be an economic inequality, which has effectively divided the city in two distinct districts; High Town, the haven for the rich and powerful, and Low Town, the domain of the hopelessly poor. According to some sources, 70% of Madripoor is actually reclaimed, referring to the fact that over time older buildings have been replaced with modern contructs [Hawkeye (4th series) #4].

For the majority of its history, Madripoor has been ruled by descendants of the pirates that first settled on the island so many years ago. After the last descendant, Prince Baran, was killed [Wolverine (2nd series) #98] the various criminal gangs that had kept to themselves started to fight over control of the island. In a daring move to stake a claim to rule the island, Viper married Wolverine, who was loved by the patrons of the island. The plan worked and Viper took control of the country[Wolverine (2nd series) #126]. However it was not to last. After Logan returned to Madripoor and got his divorce from her, Iron Man & SHIELD overthrew her regime, and put Logan's long time ally, Tyger Tiger in charge [Iron Man: Director of SHIELD Annual #1]. Tyger knew the criminal element would always be part of the country's way of life, so rather than try to squash it, she aimed to control it, while at the same time make strides in making the country more democratic, by holding elections. For reasons unknown, Daken, Wolverine's son, decided that he wanted to take control of Madripoor. After inducing a technological blackout on the island, he forced Tyger Tiger to work for him. Next, he wiped out numerous criminal gang members leaving those that remained no choice but to work for him & Tyger. With the Madripoor police force coerced as well, Daken had created a unified criminal empire[Daken: Dark Wolverine #9].

As long as it doesn’t affect the stability of the regime, Madripoor has a very relaxed policy towards most business dealings, making it one of the major business capitals of the Pacific Rim. That relaxed policy has also resulted in Madripoor being a notorious center for crime and providing a "safe haven" for crime lords and criminal organizations, seeing as Madripoor doesn’t permit extradition of criminals. That said since Tyger has took control, there are 2 exceptions; Narcotics and Slavery, although it has been known for this to occur, it is shut down very quickly. 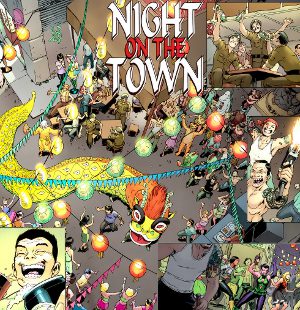 With the Monarchy of Madripoor originating from Malay Pirates the country appears to follow Hinduism, similar to other Indonesian archipelago. The sect of Hinduism they follow is based on the belief that after death a person must be returned to the pancamahabhuta, the five sacred elements, before the soul can be released to meet the supreme being and so its not uncommon to see huge funeral pyres in Madripoor. Followng the death of one of the princes cousins, a procession of giant floats were created and marched through the streets of Madripoor from the Palace down to a temple in the heart of Low Town, where they were set on fire [Amazing Fantasy (2nd series) #8].

Every year, Madripoor celebrates the Chingay carnival in Low Town. This exhuberant event is to celebrate the Chinese new year, however it is celebrated a little later in the year. The carnival has been celebrated for hundreds of years, with the first recorded being in 1791 when Dutch Merchants visited the land [New Mutants (3rd series) #41].