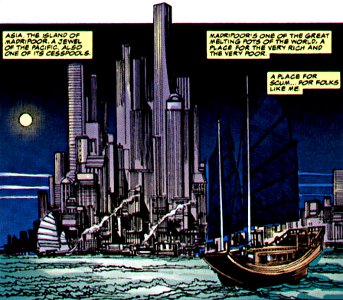 Primarily located on the hilltops and peaks, High Town is filled with sky-rise hotels, malls and every luxury imaginable for those that have money to pay for it. Cocooned in air-conditioned comfort, and protected by glass walls, High Town allows its patrons to look down on the residents of Low Town without having to touch or smell it. With increases in money being spent in Madripoor, High town has needed to grow. In some cases, the city has widened out by extending out over the water, however in a place where anything can be taken for the right price, developers have also "reclaimed" parts of Low Town to build more expensive hotels & apartments and private beaches. 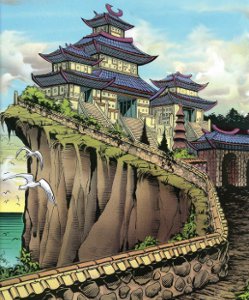 The palace of the Prince of Madripoor sits atop one of the many peaks overlooking the sea and low town. The palace is guarded by the princes own household guard. The interior is an extravagant palace with many golden statues and ornaments putting the Palais de Versailles to shame [as noted by General Coy in Wolverine (2nd Series) #5].
Amongst the many rooms within the palace, the Prince of Madripoor built a shrine to the actress Lindsay McCabe, including mannequins adorned with her film costumes.
With the Palace occupying so much space, it was quite common for the Prince to let out rooms and space to "associates" for mutual benefit. On one such occasion, he allowed 'The Broker' to have an office and use one of the rooms in the basement as a laboratory for the Lazarus project.
The palace also has a large carport, and the prince owned many expensive cars including Porsche, Rolls Royce, and even cars covered in gold [Wolverine (2nd series)#31].
After Prince Baran died, Viper made the remaining family an offer to take ownership of the palace. Viper married Wolverine in the palace gardens [Wolverine (2nd series)#126].
Although it has not been fully clarified what happened after Viper's rule was abruptly ended by Iron Man, it appears that under Tyger Tiger's rule, the palace and surrounding grounds had been turned into a museum, celebrating the life of the Madripoor Royal Dynasty [Amazing Fantasy (2nd series)#8-9].
In the 31st Century, in the divergent timeline of the Guardians of the Galaxy, Rancor and a band of her followers returned to earth in search of Logan. They visited Madripoor, and the Palace still existed, though who lived in the building is a mystery [Guardians of the Galaxy (1st series)#21-23].
First Appearance: Wolverine (2nd Series) #6
All Appearances: Wolverine (2nd Series) #6-7, #15-17, #27, #29-30, #126-7, Guardians of the Galaxy (1st series) #21, #23, Iron Man : Director of SHIELD Annual #1, Amazing Fantasy (2nd series) #8-9

Billed as the finest hotel in the world, with 60 floors of unparalleled luxury, and a luxury 'Triplex Imperial Penthouse', that is so expensive, its enough to bankrupt some small countries. The floor below the penthouse is the VIP Gymnasium for exclusive guests. The entrance to the building is just as extravagant, adorned with the Madripoor flag and a water fountain featuring jumping dolphins.

It is stated that the Sovereign Hotel is the preferred choice of the criminal elite, and the lobby is considered a 'mob' watchers paradise. General Coy had the The Triplex Imperial Penthouse on an open lease for some time until he moved back into his own villa. Professor Erskine jnr. also used the penthouse.

A more recent addition to the High Town skyline is the Madripoor Pearl which boasts 3000 luxury rooms, 2km exhibit hall, 1.5km shopping mall with all major stores and luxury boutiques, an indoor amusement park, 4 live concert venues, ten restaurants and the worlds largest and most decadent casino overlooking Madripoor bay, from 200m above.

The Hotel was used for an auction of a video tape of Operation 'Eucritta'. Many of the wealthiest criminal organizations attended the auction, as the tape featured Hawkeye supposedly killing Du Kee Feng. It was later revealed that this was a sting operation by SHIELD to find a mole within their organization.
First Appearance: Hawkeye (4th series) #4
All Appearances: Hawkeye (4th series) #4-5

Located in the heart of the High Town district, this is the only known station in the city, and the police only venture into Low Town when it suits them. The jails are in the basement and include additional chains to secure unruly prisoners. The police headquarters also has a large multi-storey car park attached to the building.
First Appearance: Wolverine (2nd Series) #10
All Appearances: Wolverine (2nd Series) #10, #98, Spider-Woman (4th series) #2-3, #5

With so many financial transactions, legal and illegal, being performed daily, it is not surprising that Madripoor has its own financial institution. The Madripoor Bank has a number of small retail banking offices located around High Town available to assist with any resident and non residents' monetary needs.
First Appearance: Daken: Dark Wolverine #6
All Appearances: Daken: Dark Wolverine #6

While some hotels in High Town have their own malls and eateries, High Town boasts a number of shopping districts to purchase whatever your heart desires, Likewise there are numerous restaurants to suit all tastes including the best a la carte sushi bar in the pacific rim [Eternals (4th series) Annual #1]. For those wanting to partake in gambling, there are also a number of casino's. one casino in particular was even used as a temporary safe haven during an extra dimensional invasion [X-Treme X-Men (1st series) #12].
First Appearance: Wolverine (2nd series) #35
All Appearances: Wolverine (2nd series) #35, Generation X #53, X-Treme X-Men (1st series) #12, Eternals (4th series) Annual #1 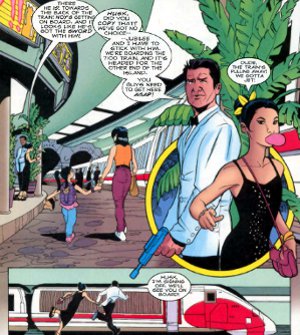 While walking is possible, especially in the pedestrianised shopping districts, Madripoor has a large number of Taxi firms operating around the city, able to take you where you require. If you prefer, Madripoor also has a high speed train line to assist in getting around High Town. The train line runs from one side of the island to the other, however it avoids the Low Town district. 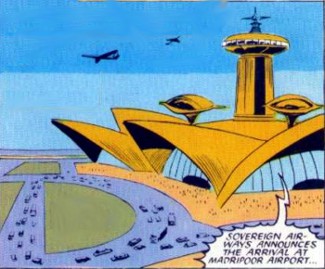 Like any international airport there are a large number of flights coming into and leaving the airport, Passport control, shops, seating areas and a taxi rank outside the main entrance. In early appearances it was identified that the Airport had only 4 gates and had scheduled day and night flights to Los Angeles and London [Wolverine (2nd series) #8].

Although it is assumed that different airlines use the airport, only Sovereign Airways have been identified, as a regular airline operating out of the airport, with a variety of craft including Concorde.

Factual Note: Concorde was primarily used between Europe and America, however for a short period in the late seventies; Singapore airlines used the aircraft for flights between London and Singapore.

The Office of Tyger Tiger

One of the many office buildings in High Town, Century Place was owned by the business man, Petrus, who worked for Tyger Tiger. Without Tyger's knowledge, Petrus was also involved in an illegal slave trade business and used some of the empty offices in the building to store the young boys and girls before they were sold onwards. He also converted 3 floors of the building in a brothel. It is not known if the building is still in use after Tyger put a stop to this illegal activity, however all the deeds were transferred to her.
First Appearance: Daken: Dark Wolverine #5
All Appearances: Daken: Dark Wolverine #5

The Futura Plaza is one of the tallest buildings in Madripoor, and notably the third tallest in the Pacific Rim. The plaza is supposedly impenetrable by conventional means, however it has been shown that entering through a window on one of the higher floors is possible. With security being extensive, the venue has been used for events requiring extra privacy, such as being used by the biggest financial linchpins of the global economy for a secret summit.
First Appearance: Amazing Spider-Man #654.1
All Appearances: Amazing Spider-Man #654.1 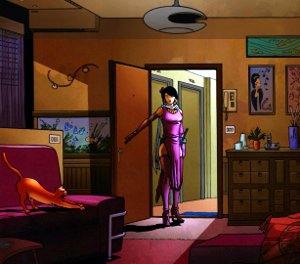 After taking control of Madripooor, Daken stayed for a while in a luxurious penthouse within High Town. The penthouse was split across 2 floors, with a pool on the lower balcony, overlooking the skyscrapers of High Town. It is not known whether this Penthouse was rented from one of the Madripoor Hotels, however with the amount of money that Daken was raking in by his criminal empire, it's possible he bought it outright.
First Appearance: Daken: Dark Wolverine #9.1
All Appearances: Daken: Dark Wolverine #9.1

Within the boundaries of High Town, or at least how it existed back in 1959, is a large mansion owned by Innsbruck. The mansion was surrounded by high concrete walls, limited access through a main gate and guarded by at least a dozen soldiers and enhanced cybernetic guard dogs. The mansion is primarily a single storey building as InnsBruck is wheelchair bound and includes a large library amongst the extravagances within. Nick Fury and his "Avengers" broke into the mansion to gather information from Innsbruck. During the operation there were many casualties and it is not known if Innsbruck survived or what has happened to the mansion complex since.
First Appearance: Avengers 1959 #4
All Appearances: Avengers 1959 #4

The Madripoor Broadcasting company provides public broadcasting for the country. It is not known whether they provide a full range of broadcasting services however they do provide a local news service under the banner of Madripoor Network News. Its not known whether it has been used for propaganda services by the ruling powers, however during the extra dimensional invasion, the Madripoor Network News was providing the country and the world with up to date coverage of what was happening on the island, through their lead news reporter, Shanna Cho.
First Appearance: X-Treme X-Men (1st series) #11
All Appearances: X-Treme X-Men (1st series) #11, #17-18

Back in the early days of the island, when the orignal settlers t othe island started using it as a base for piracy, a number of secret passageways and catacombs where created allowing them to move freely without being seen. Some of these catacombs still exist today, including some under High Town. During the extra-dimensional invasion, Many of the residents of the country fled to the catacombs to survive. One of these underground locations was used as a temporary hospital to treat those injured during the invasion.
First Appearance: X-Treme X-Men (1st series) #12
All Appearances: X-Treme X-Men (1st series) #12-13, 18