Everything outside the city, is locally refereed to as the "Highlands", however not all of the land is mountainous. Like many sub-tropical regions, the Highlands are densely populated with jungle flora. This has made expansion into the Highlands difficult, though some small pockets have been reclaimed for other uses. The Highlands are home to many wild animals including wild dogs, wolves and deer. The only known native animal is the Madripoor Spider Monkey. This sub species is believed to have been completely wiped out by hunting, after it was identified that chemicals in their brains could be used to make the drugs pow and thunderbolt [Wolverine (2nd series) #32].
There is at least 1 native tribe still living in the Highlands of Madripoor, though the number of remaining members is unknown.
It is known that General Coy also harvests opium within the highland mountains [Wolverine (2nd series) #31].
First Appearance: Wolverine (2nd series) #32
All Appearances: Wolverine (2nd series) #32, Marvel Comics Presents (1st series) #85, #87-92, Iron Man : Director of SHIELD Annual #1

Located miles away from the city in the middle of nowhere is the old highland temple, a hideout for the cult of the Muramasa Blade.
Central to the temple is the ceremony floor and altar, where the Muramasa Blade wielder would make a sacrifice to be permanently bonded with the sword.
First Appearance: Wolverine (2nd Series) #3
All Appearances: Wolverine (2nd Series) #3

Within the Madripoor jungle is an ancient temple linked to a set of gemstones, referred to as the Madripoor Set. Not much is known about the history of the temple, though it does resemble the Inca temples of South America. The temple featured a crypt and a central chamber with an altar for sacrifices. The altar had various markings including recesses for the gems of the Madripoor Set. The temple was key to the extra dimensional invasion. Gambit was strapped to the altar with a number of Madripoor Set gems surrounding him. The keystone gem was rested on his chest and using Gambit's powers, Shatain forced open the dimensional bridge to allow the invasion. Though the dimensional bridge eventually collapsed, it caused the destruction of the temple.
First Appearance: X-Treme X-Men (1st series) #10
All Appearances: X-Treme X-Men (1st series) #10-11,13-17 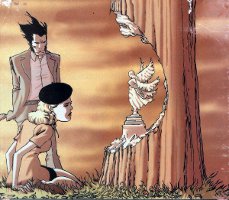 Near Low Town, hidden by a waterfall is a secret base that was used by Hydra. The base provides various functions including quarters for the Hydra troops and weapon development facilities. It is not known what has happened to the base after the Shadow Initiative with the assistance of H.A.M.M.E.R. took the Hydra agents working there captive.
First Appearance: Iron Man : Director of SHIELD Annual #1
All Appearances: Iron Man : Director of SHIELD Annual #1, Avengers: The Initiative #23-4

The Nextin facility has various offices and warehouses and is protected by a small security force. Within the grounds on the western perimeter is a small airfield, allowing Nextin to transport people and equipment into the facility out of the public eye.
First Appearance:Steve Rogers: Super Soldier #4
All Appearances: Steve Rogers: Super Soldier #4

The Director of Weapon X, Malcolm Colcord purchased the building to use as a research facility to develop the next generation of soldiers. The facility has a number of laboratories, surgical rooms and cells where test subjects are held. Colcord provided the scientists with everything they needed including test subjects, via Petrus's slave trade business. When the facility was compromised by X-23 and Daken, Colcord organised for the facility to be destroyed by a bomb.
First Appearance: Daken: Dark Wolverine #7
All Appearances: Daken: Dark Wolverine #7,#9, X-23 (2nd series) #9

Outside of the city, 2 warehouse complexes have been identified.
The first was used as part of Daken's plan to create a new criminal empire in Madripoor. Daken, with the assistance of Tyger Tiger, arranged for the majority of the gang members of the different gangs in Madripoor to congregate at this abandoned warehouse complex. After the gang members had arrived the complex was destroyed, killing all of those that were inside[Daken: Dark Wolverine #7].
Another complex was destroyed in an attack orchestrated by Susan Hatchi [Astonishing X-Men (3rd series) #55-56].
First Appearance: Daken: Dark Wolverine #7
All Appearances: Daken: Dark Wolverine #7, Astonishing X-Men (3rd series) #55-56 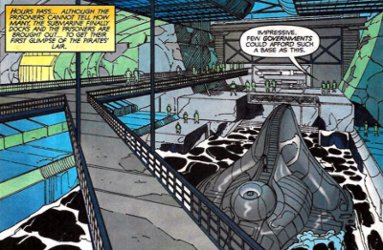 Lionmaine set himself up as a pirate on the seas surrounding Madripoor, in an attempt to raise funds to take over China. Lionmaine used an ex-government submarine facility located on Madripoor as his base of operations. Though the majority of the base is underground, The base does have some buildings above ground, located quite near to the city next to one of the many hillsides.
It is known that the British built a naval base on the island many years ago to keep the pirates in check and to protect the China trade, however whether this is the same base is unknown [Uncanny X-Men (1st series) #385].
First Appearance: Heroes for Hire (1st series) #19
All Appearances: Heroes for Hire (1st series) #19

In a jungle clearing on the outskirts of Low Town, there was a temporary airstrip used by a band of drug traffickers smuggling heroin in and out of Madripoor. Abdul killed the drug traffickers and took control of the airstrip, using it as a base of operations when he kidnapped Tyger Tiger for a second time.
First Appearance: Marvel Comics Presents (1st series) #153
All Appearances: Marvel Comics Presents (1st series) #153-155 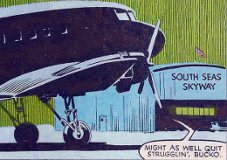 In a secluded area near to Low Town, resides the cargo bay and landing strip of South Seas Skyways, owned and operated by Archibald Corrigan, long time friend of Logan. It is not known how many planes Archie has owned, however when he first came to the island he only owned a Douglas DC3 Propeller plane. He lost this plane after it crashed into the jungle, as part of a failed attempt by Abdul Alhazred's men to kidnap him and Tyger Tiger. Though it is not known whether it was salvaged or not, not long after Archie received a cheque from Professor Xavier which he used to buy a used Douglas DC3 Dakota.
First Appearance of the Airstrip: Wolverine (2nd series) #4
All Appearances of the Airstrip: Wolverine (2nd series) #4

Located at the bottom of one of the peaks was a state of the art cocaine refining and processing facility owned by General Coy. The facility had a small security detail of Manbot androids however it was totally destroyed by Joe Fixit after he was tricked into falling on the building by Wolverine.
First Appearance of the Airstrip: Wolverine (2nd series) #8
All Appearances of the Airstrip: Wolverine (2nd series) #8

This private villa resides atop one of the mountains of the island, which Coy, supposedly, also owned. The villa boasts a private courtyard area, surrounded by a large protective wall, manned by General Coy's private army. The villa was used as a base by the General's niece, Karma, while she was possessed by the Shadow King.
When General Coy and Karma returned to Madripoor next, they stayed at the extremely expensive Imperial Triplex penthouse of the Sovereign hotel, suggesting that the villa was either sold or destroyed. However, when General Coy was presented with an opportunity of buying hallucinogens from Cyber, he was using the villa once again.
First Appearance: New Mutants (1st series) #32
All Appearances:New Mutants (1st series) #32-33, Marvel Comics Presents (1st series) #86, #89

The Crime Lord Roche had a private estate which backed onto a sheer cliff, three hundred meters above the Harbor. Unlike the "cityscape" of High Town, this estate included an expansive garden and a river which formed a water fall over the cliff joining up with waters of the harbor. The other sides of the estate are protected by a wall akin to the Berlin wall that divided the German capital during the cold war. The wall included security lights, sensors, spikes, razor wire, mines, and gun towers manned by Roche's private guard who patrolled the estate with Doberman attack dogs. Although the estate used the main electricity supply of Madripoor, within the grounds were back up generators, if required.
Although not much is known of the main building within the estate, it did include a basement dungeon, where one of Roche's employees, the Inquisitor, restrained and tortured 'guests' with thanks to a fire pit
After the death of Roche at the hands of Tyger Tiger, it is not known what happened to the estate.
First Appearance: Marvel Comics Presents (1st series) #2
All Appearances: Marvel Comics Presents (1st series) #2,#4,#7-10