Over-crowded and rotten, Low Town is where the poorest attempt to survive by any means necessary. Whereas money has been thrown at improving the High Town district, Low Town has suffered with minimal facilities, to the point that there isn't a hospital or police station within the district. Dubbed the ultimate abyss of vice and degradation, a visitor to Low Town can find whatever they want or desire, but need to watch their back or suffer being mugged, stabbed or more likely worse. 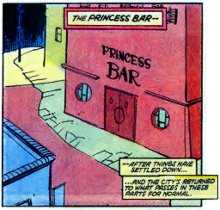 One of the many drinking establishments in Low Town, The Princess Bar is best known for being the haunt of Patch, however the bar was originally owned by Seraph and was a well known drinking establishment in the 1940's and included Logan as one of its patrons.
After Seraph died, it's not known what happened with the Bar, however it eventually became owned by O'Donnell. After a run in with the then crime boss of Madripoor, Roche, Logan became a silent partner in the bar. [Marvel Comics Presents (1st series) #7-10, Wolverine (2nd series) #3]
Apart from the main bar area, there is also a number of bedrooms and a cellar, which has been used at times to hold prisoners. Underneath the cellar are a number of secret passages and catacombs leading out into various parts of Madripoor. These passageways predate the building of the bar and its assumed were created by the original settlers to the island.

On the upper floor are a variety of bedrooms, including one used by Logan on many stops in Madripoor. Logan's room had simple furnishings, with just a bed, wardrobe and a desk. However it was the only room with a balcony looking out over Low Town.
For the majority of its history, the bar has remained virtually identical even after it had suffered major structural damage [Wolverine (2nd series) #31].
At some point Wolverine decided to give his share back to O'Donnell, whether he gave it freely away or sold it back is not known. Eventually O'Donnell became tired of owning the Bar and decided to sell up, handing over the reigns to a friend of Wolverine, Rose Wu. However Rose didn't get to own the bar for long, as she, along with O'Donnell and others were murdered in a massacre at the bar orchestrated by Prince Baran and General Coy [Wolverine (2nd series) #87, #98].

Belle originates from America, but it is not known how she came to be running a bar in Madripoor. Belle's Bar didn't last long after Logan arrived in Madripoor as Logan arranged to meet Jessica Drew in the bar, but he was confronted by the Silver Samurai and Jessica, possessed by the Murasama Blade, and a 3 way battle ensued. To end the fight quickly, Wolverine sliced the walls of the bar, collapsing the building. It's not known whether the bar was rebuilt, or what happened to Belle afterwards.
Note: the Bar was never actually named and was only referred to as a "joy house"
First Appearance: Wolverine (2nd series) #2
All Appearances: Wolverine (2nd series) #2 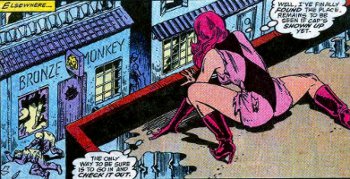 Located at 332 cyan street, the Bronze Monkey bar is a typical bawdy bar in Low Town. What marks this one differently is that its also known as the Brass Monkey Bar.
Fun fact: Opposite the bar is a toy warehouse, storing Wolverine action figures.
First Appearance: Captain America (1st series) #363
All Appearances: Captain America (1st series) #363-364

Before Tyger Tiger became ruler of Madripoor, she had many residences where she could operate from. One such was the Flower Bar in Low Town. Compared to other bars in the district, The Flower bar was considered more respectable and better furnished, including a Jukebox with a large selection of American music including Billie Holiday. Although not seen, above the bar was a private residence for Tyger Tiger, should she need a place to stay.
First Appearance: Night Thrasher #4
All Appearances: Night Thrasher #4, Marvel Comics Presents (1st series) #131 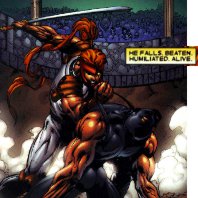 From the outside the Lotus Cafe looks just like any other bar in Low Town, however underneath the bar is a dimensional pocket, where a small arena exists. The Arena is used to host death matches which the locals bet on.

On face value Mr Max’s spa is just another bawdy house in Madripoor, however behind the legal front, Mr Max’s spa is used as a clearing house for a local slave trade. Part of the building had been converted into cells, which were used to keep numerous women as prisoners prior to being sold. With assistance from Joe Fixit (aka the Hulk), Logan was able to shut down the activities at the spa.
First Appearance: Wolverine (2nd series) #8
All Appearances: Wolverine (2nd series) #8

For those requiring somewhere to stay, a number of bars have lodging facilities that can be used or alternatively its possible to stop at a hotel. Only one hotel has been shown so far, and was unnamed, however it was used by Jessica Drew, while working as an Agent of SWORD. This hotel had its own reception area and bar, and a number of basic rooms to stay in.
First Appearance: Spider-Woman (4th series) #1
All Appearances: Spider-Woman (4th series) #1

This brothel in the heart of Lowtown is named after the proprietor, Madame Joy, however the building actually belongs to the Prince of Madripoor. When Tyger Tiger started making waves in Low Town, Madame Joy was one of the first to switch allegiances, however this resulted in revenge attacks on the place and her employees by Roche.
It is not known how many ladies work for Madame joy, however those known include Inga, Mavis and Inza.
First Appearance: Marvel Comics Presents (1st series) #7
All Appearances: Marvel Comics Presents (1st series) #7, Wolverine (2nd Series) #10, Uncanny X-Men Annual #14

Another brothel located just 5 blocks away from Cyan Street, is the unnamed brothel run by Madam Xiona. This brothel appears to be on the larger size as the villain, Crossbones, has frequented the place on many occasions, his room of choice is No. 36.
First Appearance: Captain America (1st series) #363
All Appearances: Captain America (1st series) #363

One of the more bizarre clubs within Madripoor, is run by Chang. Although referred to as a club, it is a higher end Brothel house featuring women dressed in X-Men related costumes. The main bar area of the club features tables and cages for the exotic dancers to perform in, however the club also has additional rooms, including changing rooms for dancers, guest toilets and themed suites such as the Deadpool suite.
First Appearance: Uncanny X-Force (2nd series) #7
All Appearances: Uncanny X-Force (2nd series) #7 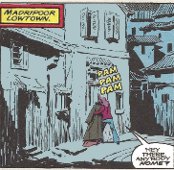 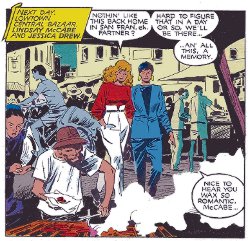 In the center of Low Town is a bazaar where one can purchase many of the delicacies of Madripoor from street vendors and small market stalls.

At some point in the past a group of French nuns, set up an orphanage within the Low Town district. Over time the Nuns vacated the premises however the orphanage continued to help those children that became parent-less. While the altruistic nature of cannot be faulted, it appears in more recent times a criminal gang known as the 4T's (Tien, Tinh, Tieu, Thoi) has taken over the orphanage for nefarious purposes, building cells in the basement for holding children prior to transportation into slave trade.
First Appearance: Amazing Fantasy (2nd series) #8
All Appearances: Amazing Fantasy (2nd series) #8

Built by the new Hellfire Club to build and produce Sentinels, this manufacturing facility is entirely automated, however for security purposes Hellfire guards are based at the facility. The facility was partially destroyed when Wolverine, Phoenix III & Storm visited to find out where ex-students of the Jean Grey School had disappeared.
First Appearance: Wolverine & the X-Men #31
All Appearances: Wolverine & the X-Men #31 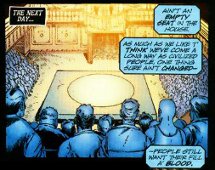 Each year the Bloodsport Tournament is held in Madripoor to find the greatest warrior. The tournament is held at an arena located within the Low Town district of Madripoor. The arena is standard fayre, with the main fighting area surrounded on all sides by spectator seating. The matches in the tournament are normally cage matches however they have also featured "special" matches such as curtain, cylinder, tank and strap matches. Just off the main fighting area is the locker room where the fighters can rest between matches. 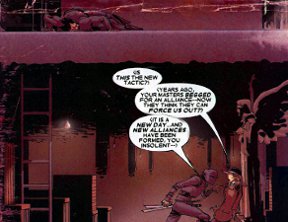 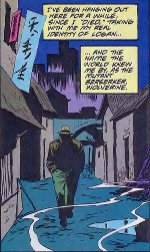 Prior to the development of High Town, Wharfside was considered to be one of the richest parts of the island. However, over time it has become one of the oldest, poorest and most rundown parts of Low Town. Like many of the districts of Low Town, small factions have fought for control and within Wharfside there have been 2 main factions, one lead by Mr Morrow. In more recent times, since Madripoor has come under the rule of Tyger Tiger, the criminal activity seems to have been quelled and the area slowly rejuvenated and renamed simply, The Wharf.
First Appearance: Wolverine (2nd series) #25
All Appearances: Wolverine (2nd series) #25, #30 , Astonishing X-Men (3rd series) #54 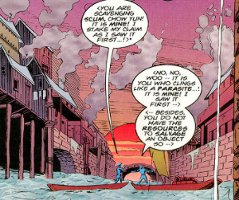 A network of canals have been built through Low Town to help transport goods from the docks and harbour to businesses further within Madripoor. When they were first built, the area around the canals was deemed a highlight of the city and many businesses set up along the canal including a luxurious hotel, that proudly boasted its location. Over time the area became run down, to the point that the hotel became abandoned and gradually starting falling into the canal as the filthy waters eroded its foundations.
First Appearance: X-Factor (1st series) #110
All Appearances: X-Factor (1st series) #110-111