Eighteen individuals had entered the energy form of Onslaught to give it substance and, by all rights, they should have died. However, they did not. While everyone believed these people to be dead, the subconscious of young Franklin Richards reached out and saved his family and their friends with his reality-altering powers. Without even being aware of it, the boy created a pocket universe with another Earth inside, and the heroes found themselves taken there, unaware of their previous lives. To them, this was their birthplace, and the planet was filled with millions of humans for the heroes to interact with. Some of them were simulacrums of people they remembered from their past, others entirely new. In this pocket universe, the heroes actually re-lived their lives... modernized, compromised versions of their histories. 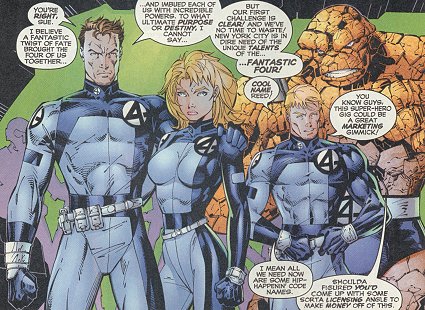 Albeit they were tied together in different ways, the crucial events in these character’s histories and the basic character interactions were quite similar, if not outright the same.

In the pocket universe, the Fantastic Four too were four friends who tested a spacecraft, only to be hit by cosmic rays that transformed them into Mr. Fantastic, the Invisible Woman, the Thing and the Human Torch II. During their adventures they encountered Dr. Doom and Prince Namor, and in other occasions befriended the Black Panther and the Inhuman Royal Family, including Crystal.

The Avengers too were formed in Franklin’s universe, and crucial events happened just the same (for example Loki being the team’s first foe). The line-up, though, was somewhat altered. 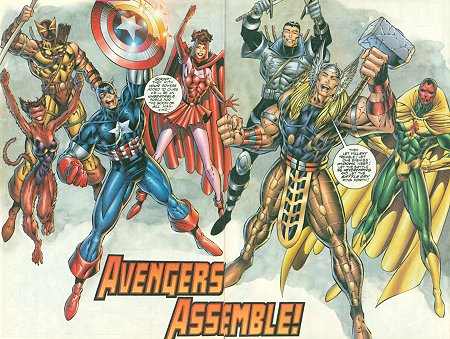 Other than Captain America, the Vision II, Hawkeye, the Scarlet Witch and Thor, the group’s roster included recreated versions of the Swordsman and Hellcat. Henry Pym aided the team with his scientific genius, or as Ant-Man, and his lover Janet van Dyne, aka the Wasp, too lived at the Avengers compound.
Later on, the Assemblers met a new ally in Iron Man during one of their battles. When not working with the team, Captain America was scouting the city with his two partners, the Falcon and a female Bucky.

For the Hulk, the situation was even more complicated. In battle with Onslaught, he had split apart, both of his alter egos having a body. While the Hulk remained behind in the regular universe, Dr. Bruce Banner joined the heroes inside Franklin’s creation. Once there, he developed a new Hulk persona, resulting in there being two Hulks. However, the prolonged separation of the two, both having originated from the same body but now a universe apart, caused a strange destabilizing effect around the green goliath. The effect grew stronger with time, up to the point where it threatened the very fabric of both realities.

Franklin Richards still knew nothing of this. To him, everyone he held dear was gone. Among the ruins of Onslaught’s battle with the heroes, the boy had found a blue ball that he had held on to ever since, somehow sensing that it was “important.” It was actually inside of this ball that the pocket-universe was located. About a year after the heroes had vanished, Franklin found himself approached by a woman who introduced herself as Ashema. This was not her true form, though. She only chose this appearance to not scare Franklin away, as she in truth was the Celestial known as “The Listener.” Franklin’s actions had caught the Celestials’ attention for two reasons - their main interest was the evolutionary gap that humanity had made for one of them to be capable of creating life and, of course, there was also the danger to reality, caused by there being two universes where there should be only one. In that regard, the Celestials wanted Franklin to chose one universe to survive, while the other would have to be erased. However, the boy was of course unable to make such a choice, and Ashema took him inside his pocket universe so that he could be reunited with his family. After the heroes had been made aware of the truth and both Hulks had been detained, a plan was designed for all of them to travel back to Earth, before the pocket universe would go down.

Pooling the scientific geniuses of Mr. Fantastic, Iron Man and Dr. Doom, they designed a spacecraft capable of taking them home (by a detour through the Negative Zone). However, during the flight, Doom was revealed to have a secret agenda. Wanting Franklin’s powers all for himself, he tried to kidnap the boy, but his escape was thwarted by Thor. The battle ended with Dr. Doom being kicked out of the ship right before it crossed the dimensional border. While the heroes were now safely home and the two Hulks fused back together, the Reborn-Earth didn’t die, though. The interaction with Franklin had affected Ashema, so that she was now able to understand the meaning of compassion. She convinced the other members of her race to let her give up her godly status as a Celestial, taking the pocket universe inside herself, to nurture it instead of Franklin. [Heroes Reborn: The Return #1-4]

There seems to be some confusion which characters in the Heroes Reborn universe were the real deals, and which re-creations of Franklin. In this article, it mentions only the eighteen characters clearly established to have entered Onslaught’s energy form. However, upon returning, it also shows She-Hulk and the Royal Family of the Inhumans. Strangely, in a flashback story in Avengers Annual '99, She-Hulk was clearly established as not among the lost heroes, and when Crystal visited Attilan in Quicksilver #4, there was no mention of the other Inhumans having been considered dead too. A possible explanation might be that while in the Heroes Reborn universe, the heroes had no clear idea who was actually from the other universe and who not, and that they merely thought they had to bring She-Hulk and the Inhumans along. However, as soon as they breached the dimensional barrier, these Franklin-created duplicates vanished. 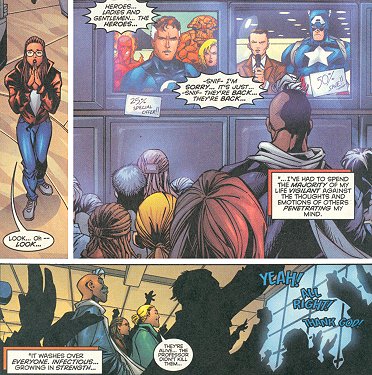 When the word got out that the heroes had returned, the world could only react in one, proper way: cheer and clap in joy as loud as they could. It was the proof that there was still hope left in the world, and that things only could get better from now on. Especially, the X-Men were overjoyed, as it meant that their mentor, Professor Xavier, did not have the heroes‘ deaths on his conscience anymore. [X-Men (2nd series) #71]

The heroes were back, but it took them some time to get adjusted to what happened in the year they were gone. The Fantastic Four found themselves without proper headquarters, as the Thunderbolts’s leader, Baron Zemo, had blown up Four Freedoms Plaza, once their secret of being villains in disguise had been outed. For weeks, the Fantastic Four operated from a different base, namely a building at Pier Four in New York harbor. In an attempt to reconcile with her, the Human Torch searched for Lyja but found no trace of her. She might have left Earth in the meantime. Another idea might be that she was stalking the Fantastic Four in disguise (maybe post woman Billie Lumpkin), just like she has done before. She might have been the mysterious person who saved Johnny from drowning in an underground river when the team fought the Mole Man. If that was really the case, she must have been devastated to find the Torch dating another woman before long, making it rather apparent that he no longer cares about Lyja anymore. [Thunderbolts #10, Fantastic Four (3rd series) #1-4]

While the Avengers headquarters remained intact, they faced the task of rebuilding their entire organization. Governmental clearances and security codes needed to be restored, and a new roster had to be picked. And some of the group were affected on an even more personal basis. While happy to be with each other again, Crystal and Quicksilver soon found his new duties as the leader of the Knights of Wundagore getting between them, leading to another separation of the couple. Others even found their bodies had undergone a transformation. 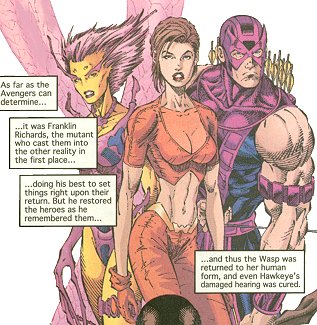 Prior to Onslaught, Iron Man had been mind-controlled by Immortus. During the crisis known as The Crossing, he manipulated Iron Man into becoming a murderer. Unlike some other victims, the Wasp barely survived, though only by being subjected to a second application of the process that gave her her insect powers in the first place, causing her to mutate her into a bizarre bug-woman. Iron Man himself later died, though he was replaced with a much younger version of himself from a different timeline. Now, back from Franklin’s universe, both bug-Jan and teen-Tony were back to normal. Apparently, the reason for this effect is once more Franklin Richard’s reality warping powers. When the boy saved the heroes by sending them into his pocket universe, he recreated them the way he remembered them. The boy being unaware of these recent transformations, they were undone. By the same right, Hawkeye was cured of being deaf in one ear. [Avengers Annual 2001]

After his fight with Thor, Dr. Doom plummeted back to the Earth in the Reborn-universe, and found that several weeks had passed since the heroes‘ departure. The planet had dramatically changed in the meantime, the oceans having risen several hundred feet, drowning all of Manhattan, save for the tallest skyscrapers upper levels. Regardless, Doom found himself presented with an opportunity – this was an entire planet ripe for conquest. Despite it’s natural resources, Doom was also interested in its inhabitants, because they all bore the potential for super-human powers, a side-effect of them being created by Franklin Richards. Doom quickly gathered some allies and lackeys around himself, and was on his way to become the planet’s ruler, when the cause of the changes in Earth's eco-systems were uncovered. As long as the pocket-universe was protected by Franklin, it was secure, but now in Ashema’s care, it was vulnerable to an attack of the Dreaming Celestial, a rogue member of the alien race who had long been imprisoned. It was he who had caused the flood and several other things and, in direct conflict with Ashema, he quickly gained the upper hand, for she had given up most of her power.

Dr. Doom, however, came up with a plan to overcome the Dreaming Celestial’s influence: he managed to transport the entire planet into the regular universe, where the Dreaming Celestial was still trapped and unable to affect it. Earth, or planet Doom, as the evil scientist came to call it, ended up in Earth’s orbit, on the opposite side of the sun. [Heroes Reborn: Doomsday, Heroes Reborn: Doom] In fact, it’s the second time that Earth shares it's orbit with another planet. The first time it was the High Evolutionary who artificially created a planet, dubbed Counter-Earth, though at one point it was stolen by the Beyonders.

Because of its location, Planet Doom is nowadays more commonly referred to as Counter-Earth (II), and already several individuals have traveled from there to Earth and vice versa - most notably the Thunderbolts and Doom’s loyal aide, Lancer.