Kicked out of the Acolytes, Fabian Cortez goes to Genosha, where he assumes leadership of the island’s mutate population and fuels the rebellion against the Genoshan government. A Civil War erupts between mutates, humans and a small resistance group consisting of members of both races. While the UN are discussing how to get the situation under control, mutant expert Professor Charles Xavier is sent to the island on a peace keeping mission, accompanied by the mutate Jenny Ransome and Phillip Moreau, the former Genegineer’s son. The conflict enters a new level when Cortez kidnaps Luna Maximoff, the daughter of Crystal and Quicksilver, and as such Magneto‘s grandchild, to get revenge on him. While the X-Men and Quicksilver secretly enter the island, the Avengers have to violate their UN charter when they, against direct orders, depart for Genosha to rescue the child of one of their members. As self-proclaimed heir of Magneto, Exodus too arrives at the battleside and takes up Cortez’s challenge in his name. However the assembled heroes soon realize that his vast abilities and fanatic view of mutants as superior race make him a much bigger problem than Cortez ever was.

With growing concern, the world watches a civil war erupting on the island nation of Genosha, the Magistrates battling the mutate population. In Washington, Val Cooper discusses the situation with Henry Peter Gyrich and SHIELD commander Nick Fury. They agree on a plan; Gyrich and U.S.Agent are to escort a diplomat to Genosha, while Nick Fury has to deal with another problem – the Avengers. Not much later, Fury arrives with Shield troops at Avengers mansion and tells both the teams of both coasts that no matter what, they are not to interfere with the events in Genosha. They heroes are surprised as they had no intention of entering the war, until Crystal realizes that her daughter Luna, as granddaughter of Magneto, might be targeted by some fanatic groups to make a statement on human-mutant relations. Indeed the child has already been kidnapped and replaced by a shapechanger. There is nothing that can stop a mother, not even SHIELD and while one half of the Avengers battle the armed forces trying to keep them grounded, Crystal, the Scarlet Witch, Captain America, the Black Knight, Sersi and War Machine board a quinjet and depart to Genosha. 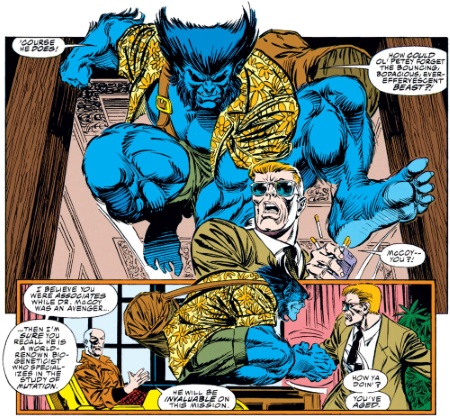 At the same time, Gyrich arrives at Xavier’s mansion in Westchester and asks the Professor, a well known expert on mutant issues, to accompany him and Genoshan mutant right activists Phillip Moreau and Jenny Ransome, to the island nation, with the U.S.Agent serving as their bodyguard. Xavier agrees but only if one of his own associates can go with them as well, Hank McCoy, also known as the Beast. Despite their history, Gyrich allows the Beast’s presence, in fact he expected him to be part of the group as his girlfriend Trish Tilby is among the newspeople currently reporting from the island. As they leave, Xavier telepathically alerts the rest of his students that he expects trouble and tells them to secretly follow and meet him in Genosha.

A news broadcast from the island reveals the driving force behind the rebellion – former Acolyte and traitor to Magneto – Fabian Cortez, in his arms little Luna. Proudly he assumes control of Genosha, as the former government have just died in an assassination. Quicksilver,. Luna’s father, currently the X-Men’s house guest, nearly goes insane seeing his child in the madman’s arms and accompanies the mutants to the island. The transmission is also received on Avalon, the Acolytes‘ space station, and as Magneto is currently catatonic, his self-proclaimed heir decides to answer Cortez‘ challenge in his name. He too departs for the island.

Upon arrival, the Avengers witness a struggle between rivaling Genoshan forces. Before they can even come up with a plan, Exodus arrives as well and makes his presence known by incinerating all humans. After he insults the Scarlet Witch for being a disgrace for her father, it‘s pretty clear that reason won’t work with him. A fight starts and while War Machine and Sersi engage Exodus in an arial battle, and Cap and the Black Knight try their best with the combating groups in the streets, Crystal and Wanda slip away, trying to locate little Luna.

Shortly after secretly entering Genosha, the convoy with Xavier, the Beast and their associates are met by a small resistance group consisting of both human and mutate members, led by scientist Renee Majcomb. She gives Xavier secret information on something very important hidden below the capital city Hammer Bay. Investigating the lead, Xavier, the Beast, and U.S.Agent who secretly followed them discover a huge underground concentration camp for mutates. By the time Gyrich, Ransome and Moreau catch up, a Magistrate patrol discovers the intruders, leading to a battle.

The X-Men arrive in yet another location outside of Genosha’s capital city, but soon they are engaged in combat too. A mutate group called the Unforgiven, apparently led by Cortez himself gets them, but after a while they are all defeated. „Cortez“ was just a shapechanger meant to distract the heroes, while the real one is still in Hammer Bay with his hostage. As they reach the city, the group splits up- Jean accompanies Quicksilver in his quest for his daughter, while the other mutants try to get the civil war under control. 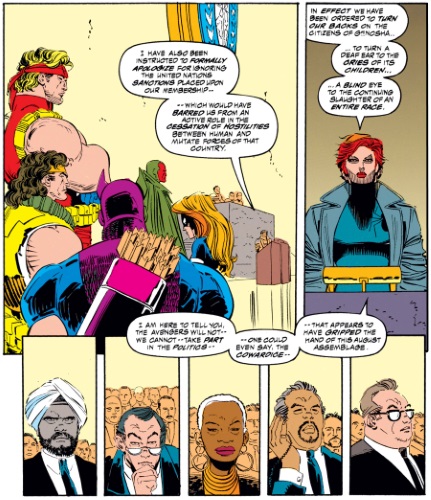 Meanwhile the other Avengers in New York are led before the UN security council, where they are reprimanded for interfering in an international matter out of their custody. Hawkeye freaks out and accuses the politicians of wasting too much time of speeches, negotiations and decisions, while there are people suffering and dying. The Council members are offended by his outbreak, but the Black Widow is able to calm them in a speech addressing the entire UN assembly. However she makes one thing clear: the Avengers will not stand idly by when there are lives at stake, even if that means losing their UN charter. 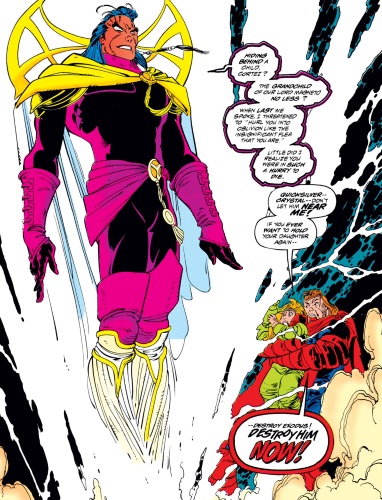 system of Hammer Bay. At first mistaking each other for enemies striking out of the dark surroundings, they soon realize their error. The estranged husband and wife decide to set aside their differences for the sake of Luna. Jean interrupts the happy reunion of Quicksilver, Crystal and the Scarlet Witch by saying that she sense Cortez nearby. Indeed he emerges out of the shadows, but none of the heroes dare to strike at him, as he uses Luna as a human shield. Suddenly a hole is torn in the tunnel ceiling, it’s Exodus, who challenges Cortez for his betrayal of Magneto. Their battle is brief and swift, and Cortez is left for dead in the swears while Exodus claims the prize, Luna, for himself. Not willing to hand her to back to Magneto’s tainted offspring he announces that they will pay for their sins, just like Genosha will for it’s sins against mutantkind.

In the streets above, the other X-Men and Avengers have met and joined forces, trying to keep the civil war from spreading, when suddenly they are telepathically alerted by Xavier to him and his associates fighting a losing battle in the underground camp. 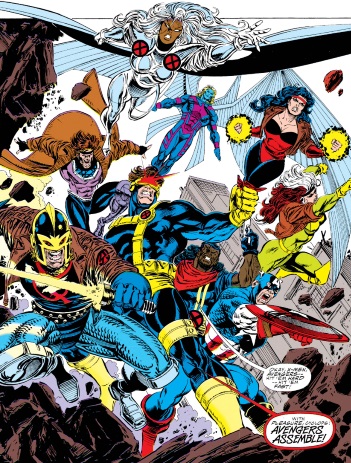 The Magistrates are brought quickly under control, and the heroes start tending to the wounded people in the camp, getting them to medical attention. However a new danger presents itself when out of nowhere an energy barrier encases the entire city. Slowly the sphere begins to shrink, threatening to crush anyone inside. It‘s the doing of Exodus. With the four missing heroes in thrall, Exodus comes to the surface and declares to anyone present that he is the heir to Magneto and that he will crush the entire island unless it’s purged of any human blood. Immediately the mutates start to rally, wanting to follow his order, but the X-Men and Avengers stand in their way. One half deals with the attacks from the Genoshans, while the others try to overpower Exodus. They throw their all against him, but it’s only Xavier’s mental blast that manages to harm the opponent for a fraction, distracting him long enough for the Black Knight to use his neuro-disruptive blade on Exodus.

The energy barrier disrupts and Genosha is free again. However Exodus comes around sooner than expected and gets airborne again. He knows that he would lose a second battle on this day, so he chooses to depart, though only after a final strike against the foul son of Magneto. Quicksilver is hit by the energy outburst and appears dead. It’s only CPR from the Black Knight that saves his life. With little Luna in her arms, Crystal thanks her would-be lover for saving the life of her estranged husband. 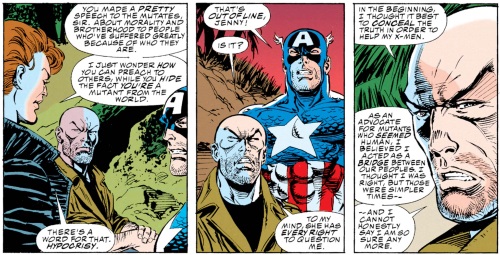 The next day, the island seems to be at a temporary peace. SHIELD begin to deliver food and supplies to the war-torn nation, while Captain America and Xavier ponder what the future will bring for Genosha. They are approached by Jenny Ransome who thanks the professor for the speech he gave earlier, though she asks how he can preach about honesty and openness when he still hides the fact that he is a mutant.

Genosha:
Though tempers would flare up from time to time, and rivaling groups lashed out every now and then, Genosha was at a temporary peace with Jenny Ransome as interim Governor. However not before long the Legacy Virus turned into an epidemic, and after the events of the Magneto War, the UN decided to hand over the island nation to Magneto, hoping that he would be kept busy by fighting disease, famine and several rebel groups at the same time. Whilst under Magneto's rule the island was attacked by Sentinels, wiping out much of the population.

Avengers:
The UN charter of the team was apparently unaffected, and they never ran into conflict with the organization again . Apparently the UN realized that the Avengers would need to serve independently from them, and much later in Avengers (3rd series) #61, the team was granted the status of a sovereignty.

After recovering from his injuries, Quicksilver returned to active Avengers status and he and Crystal made up with each other. The couple was on the way back to happiness, until the Onslaught incident, during which Crystal apparently died among Earth‘s heroes (they were transported to a pocket universe) and Quicksilver remained behind with their daughter.

During the crossover, the Black Knight thinks to himself that he recognizes Exodus from somewhere. This was later solved in a time paradox. Shortly after Bloodties, the Black Knight was transported to the Ultraverse, where he became a part of Ultraforce. When he later returned to the Marvel Universe, he accidentally ended up in the past, briefly living the life of one of his ancestors in the 12th century. It was then that he met Paris du Bennet, who was transformed into Exodus by Apocalypse.

X-Men:
None. Professor Xavier continued to hide his mutant powers for months. Although the world later learned of his telepathy, it was only because Cassandra Nova had inhabited his body, and not by his own choice.