Apocalypse’s plan of merging with X-Man, Nate Grey, fails and he finds himself merged with Cyclops instead. As if things aren't bad enough for the Big Blue the draining process didn’t fully complete and he needs as much of the Twelve’s energies as he can get. Using his newly received powers, he warps the X-Men’s realities several times in an attempt to get them to use their powers to recharge the machine and it almost works a few times. However, Cyclops is still inside of Apocalypse fighting back at him whenever he can, and Jean is the only one who can sense her husband still alive. 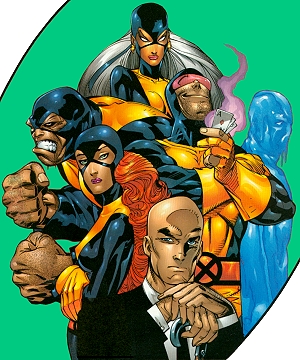 Continued from : Apocalypse: The Twelve

In the first of alternate realities, Apocalypse sends the X-Men back to the past. However, he alters the exact details of the beginnings of the X-Men. We see Jean Grey arriving at Xavier’s School For Gifted Youngsters. She’s greeted by Xavier and his students: Beast, Gambit, Iceman and Storm. Jean has a sinking feeling that something is not right. Later on Cerebro alerts them to a new mutant presence. It turns out that it’s Magneto and Polaris. They’re threatening to take over Cape Citadel. They leave, but not before Magneto threatens their lives. Later, on Asteroid M, Magneto and his Brotherhood discuss their future plans. Sunfire enters and tells Magneto he’s found a new mutant on Earth they should check out.

Back with the X-Men, Cerebro alerts them to another mutant presence nearby. The team heads out to the “Monolith“ circus where Cerebro told them to go. They find Colossus performing a strong man act. While trying to convince him to join the X-Men, Magneto and his Brotherhood show up. Before they can battle, a stranger nearby yells out to Jean. It’s Scott, and he’s being chased by an angry mob. Jean goes over to protect him. They tell each other they love one another. Suddenly, Scott reverts into Cyclopalypse. Everyone attacks him not knowing that by using their powers they are helping to recharge the circuit for Apocalypse’s power transfer. During the melee they realize that this reality isn’t right. They start remembering everything that actually happened; Cyclopalypse disappears from the battle and everything returns to normal. They find themselves back in the chamber of the Twelve. Phoenix tries to convince everyone that Scott is still alive, but Professor X doesn’t believe her. She storms off in anger.

The second reality is based in Cable’s book. Here, Cable is the leader of an opposition group based in Egypt. His enemy, the “Pharaoh”, has conquered many lands and controls almost half the Earth. On this day, Cable defeats a small band of his army. After discussing what their next move should be with his girlfriend Aliya and Professor X, Cannonball, Warpath, M and Synch arrive. They are the scouting party of Cable’s reinforcements. Over the horizon we can see hundreds of people coming to Cable’s cause. Sunfire, Storm and Magneto are leading the army.

They decide they should attack right away. Cable and Aliya scout out the temple where the enemy is located. Cable goes over the attack plan with his lover. He wants to know if she feels like this whole thing isn’t right. Something is bothering him about the situation. She only declares her love for him. Later on, they storm the citadel. Iceman leads the invasion and they manage to distract the enemy forces. A few of them, Cable, Storm, Sunfire, Magneto and Aliya make it to the Pharaoh’s room. It turns out the Living Monolith has been the one wreaking havoc, yet Cyclopalypse has been guiding him the whole time. They knew that Cable and his small group would be coming and set a trap. Once they realize that enemy soldiers are surrounding them, Cable and his friends all attack the Monolith. He proves too powerful and takes them all on. Once again the Twelve are tricked into using their powers. Cable suddenly realizes what’s going on and stops everyone, even though it means sacrificing his true love’s existence. He finds himself back in the chamber of the Twelve, and is crying.

Elsewhen and –where, Wolverine, Spider-Man, Ghost Rider and the Hulk are the new Fantastic Four. They try to to keep the Harpy, Banner’s wife, from hurting other people and plan on placing her in the negative zone until they can find a cure for her condition. Annihilus and Blastaar were waiting for them on the other side of the portal, and a battle begins. Spiderman quickly rescues his daughter May, while Wolverine clobbers Blastaar. One of Blastaar's energy blasts hits the Hulk freeing the Harpy in the process. This also causes Banner to loose control over himself and he turns into the Savage Hulk. He smacks Blastaar so hard he is knocked back through the portal. Together the others manage to capture both Annihilus and the Harpy and seal off the negative zone after they have been sent through the portal.

Banner and Parker go off to work on a cure for the Harpy and Wolverine and Ghostrider relax. Ghostrider leaves on his jet bike and is shot down shortly after. Later on, the Fantasti-Flare is fired in the sky above New York and Wolverine responds, making him run from a date with his girlfriend Stacey once again. He arrives back at base and is told that Dr. Doom has assassinated President Robert Kelly and taken over the White House, but Dr. Doom has been dead for years. Suddenly, a group of Doombots smash through the wall. Banner turns into the Grey Hulk and the team defeats them easily. The group heads off to Washington wondering all the while why Ghost Rider hasn’t responded to the flare.

Their plane is shot down and the Fantastic Four battle through an army of Doombots. They end up in the White House and find Ghost Rider tied to a large bomb. Dr. Doom is also there. The Hulk smashes Dr. Doom and Wolverine frees his teammate. The bomb was rigged to the ropes and a countdown begins. The Hulk puts the bomb into orbit. Wolverine takes out Dr. Doom and removes his mask to discover that it is some type of robot. Arnim Zola the Bio-fanatic enters the room. He tells the four about his plan to take over the world. It turns out that the Doom robot is also a bomb. The team escapes, but not before Wolverine cracks Zola's glass face shield so he cannot see. Unable to make his escape he is blown up by his own bomb. Outside the Fantastic Four see that Graydon Creed is being sworn in as the new president. Oh no !

In X-Men Unlimited, the story is set several years in the future. The X-Men are on Earth’s moon fighting a battle against the Shi’ar Empire. The Shi’ar want to take over the Earth. The X-Men take on hundreds of soldiers. After battling for a short while, Apocalypse’s four Horsemen show up to do some damage. Eric the Red is now the new Horseman of Death. 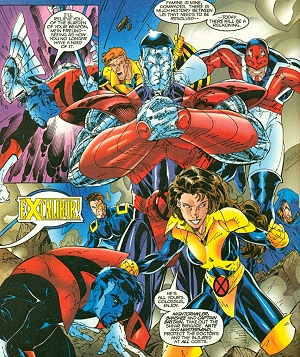 Ahab and Caliban stumble upon the infirmary while Deathbird and Eric attack the standing X-Men. The patients in the infirmary are about to buy the farm when Excalibur shows up. They are able to protect everyone and some of the members leave to help the other X-Men. Eric the Red and Wolverine go toe to toe. Banshee flies up into space and destroys many ships with his sonic scream. He falls unconscious to the ground. Eventually everyone is pushed back into the infirmary area. The enemy surrounds the X-Men and Excalibur.

Out of nowhere Professor X and a horde of Skrulls drop in from space. Xavier attacks Deathbird for killing his love, Lilandra and Wolverine skewers Eric the Red. After Ahab shoots Kitty, Caliban switches sides and attacks him. Deathbird recovers and puts down Caliban’s insurrection. With things looking bleak, Jean with the aid of Mastermind, creates the illusion of the Dark Phoenix returning. It works and all of the Shi’ar flee. Deathbird decides that with two Horsemen out cold they should retreat as well. The X-Men and Excalibur are now alone. Professor Xavier tells them the battle will be long and hard, but they will eventually stop the Shi’ar. 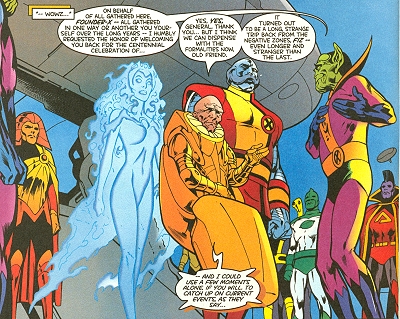 In Apocalypse’s last attempt we find the team now way in the future. We are shown an alien teacher by the name of E’tha going over a brief history of the X-Men with her class. She tells of all the good they’ve done in the universe. The students are distracted by a ship’s arrival. Onboard are Professor X, Storm and Colossus. There’s a big celebration for Professor X’s arrival. We catch up on what everyone’s been doing over the many decades. Even Magneto shows up with his Brotherhood. Unfortunately, the reason Xavier came back is because he’s dying. Storm heads off in search of Jean. She wants her to talk to Xavier before he dies. They haven’t been close since Cyclops sacrificed his life to stop Apocalypse. 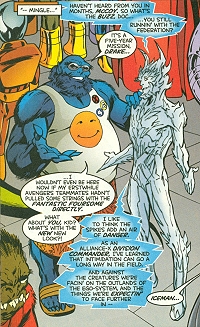 One of the denizens of the planet alerts them to a machine that could possibly save Charles’ life. It only requires their mutant energies to activate it. After starting the machine, Cyclopalypse reveals his true self. They have inadvertently energized him. He turns back time to when the whole thing first began attempting to take their entire life energies, yet during the process the circuit explodes. Jean thinks it was Cyclops’ doing, trapped down deep with Apocalypse. However, nobody believes her. Cable attempts to kill Cyclopalypse, but Jean stops him, allowing Cyclopalypse and the Monolith to teleport to safety. She didn’t want Cyclops to be killed.

Back at the mansion, Professor mulls the recent events over in his head. He wonders if Jean and him will ever be close again. In the end, Jean leaves the mansion in a cab, the same way she arrived many years ago.

Actually the Ages of Apocalypse are a sub-chapter of the Twelve Saga, so the general repercussions are handled at that crossover entry.

The warped reality scenes all get disrupted and dissipate into nothingness. Yet they hint at possible future events that might or might not happen in time. Ever since this crossover, fans have been anticipating Siphon’s debut or the reformation of Excalibur, the latter of which did occur.