Without warning or apparent reason, the Morlocks living in the abandoned subway tunnels below New York are slaughtered by the Marauders. The X-Men, X-Factor and some other heroes try to help, but they are only able to rescue a few and have casualties among their ranks as well. 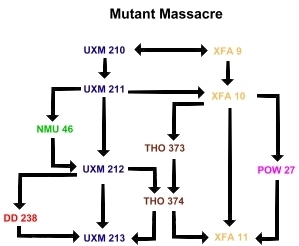 The Marauders follow Tommy, a Morlock girl, into the tunnels. As soon as they know the Alley's location, they kill her. Entering the Alley, the Marauders start to kill anyone in sight. Meanwhile Skids hides Rusty in the Morlock tunnels, but Freedom Force follows (they want to arrest him for accidentally having burned a woman when his mutant power manifested). Artie Maddicks mentally probes the tunnels and learns about the danger of the Marauders. He leaves X-Factor a note and enters the tunnels as well. In the tunnels he meets Leech and Caliban.

A dying Morlock is able to contact the X-Men for help. Of course they respond although the team, especially Nightcrawler, is in bad shape after having battled Nimrod. In the Alley, they find many hurt or already dead Morlocks. Callisto, though hurt, is still able to fight. Besides many unnamed people, Annalee and Piper die. The X-Men fight some of the Marauders and both teams have casualties. Riptide puts Nightcrawler in a coma, and Colossus angrily snaps his neck. Shadowcat is hit by one of Harpoon’s energy spears and stuck in a phased state; she can no longer solidify. 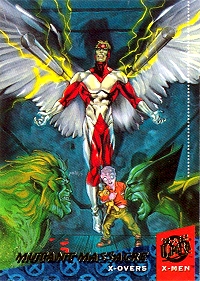 X-Factor finds Artie's note, follows into the tunnels, and rescues Skids and Rusty from the clutches of Freedom Force. While Angel and Jean take them back to their headquarters, Cyclops, Beast and Iceman continue to search for Artie. Suddenly they observe a few Morlocks (Beautiful Dreamer, Zeek, Erg) on the run from some of the Marauders. Of course they join the fight and are able to drive the Marauders off.

Sabretooth hurts Caliban, but Leech and Artie pull him into a pipe too narrow for Sabretooth to enter. In the midst of the Massacre, Plague gets an offer from Apocalypse to join his Horsemen. She accepts and is teleported away to safety.

Storm orders a retreat, but she asks Wolverine to hunt down one of the Marauders for questioning. The X-Men and the New Mutants turn their hangar into a field hospital. Callisto isn't hurt badly, but Sunder's leg has to be amputated. Even with the medical treatment, more and more of the Morlocks are dying. Illyana teleported Moira MacTaggert from Muir Island to help the many wounded people, and soon she gains one more patient in Colossus. During the fight he was hit by one of Harpoon's energy lances and immediately afterwards received many of Riptide's throwing stars at a close range; although not visible they damaged his metallic hide on a molecular level with energy leaking from Piotr. Magneto succeeds in closing the ruptures with his powers, but the operation leaves Colossus paralyzed.

Angel and Jean reunite with their teammates just in time to help them fight another Marauders attack. During the last battle Cyclops, Beast and Iceman received injuries. Prism shatters when Jean telekinetically slams him into a wall. Angel tells Jean to take all three of them and the rescued Morlocks to their infirmary, while he continues to search for the still missing Artie.

Hidden in the pipe, Artie fears that Caliban will bleed to death. He leaves the secure place to search for X-Factor. Powerpack learns through Franklin's dreams about Leech being in danger. Even though they face Sabretooth and a few more Marauders on the way, they are able to rescue Leech and Caliban from the pipe.

Angel finds Artie but gets ambushed by the Marauders. Warren tells Artie to run and buys him as much time as possible to get away, before he finally is pinned to the tunnel walls by his wings. With his light hollow bones damaged and fading in and out of consciousness, Warren would have surely died if not for Thor, who drives the Marauders off and even kills Blockbuster. Artie comes out of hiding and mentally tracking Scott and Jean he shows Thor where to take the Angel. 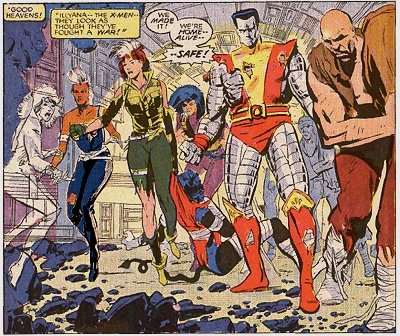 Wolverine browses the tunnels and rescues the Morlock healer from certain death at the hands of Sabretooth, who fortunately has no idea how important that particular Morlock is.

After the X-Factor members treated their injuries and left the Morlock quartet with Skids; Cyclops, Jean, Beast and Iceman re-enter the tunnels in search for more survivors. They run into Powerpack and take Caliban and Leech from them, sending the kids back home to their parents. Beast and Iceman are chosen to take the two Morlocks to safety, while Scott and Jean continue the search for little Artie. Not before long they meet him with Thor and the critically injured Angel.

On the way back to the X-Factor complex, they encounter a group of four more Morlocks, calling themselves the "Tunnelers", who were able to stay alive: Masque, Scaleface, Berzerker and Blow-Hard. X-Factor invites them to join, which they reluctantly do. The Tunnelers are not sure about X-Factor's intention. Secretly they sneak out of the complex and get caught in a local gang war. The resulting fight with the police and X-Factor leads to the deaths of Scaleface, Berzerker and Blow-Hard.

After having checked the Alley for any other survivors, but finding none, Thor creates a firestorm through the Morlock tunnels, that burns away all the blood and dead bodies.

Some local teenagers claim the empty tunnels for themselves, but Sabretooth has set up temporary base there. He scares them away, but takes one of the girls hostage for a mate. Daredevil is able to free her. Later, Sabretooth attacks Xavier’s school and while distracted in battle with Wolverine, Psylocke is able to slip into his mind and learn who the secret employer of the Marauders is, and as such responsible for the senseless slaughtering.

During the whole crossover the X-Men and X-Factor do not meet and have no knowledge of the other team having rescued some survivors too.

Note :
10 years after the original storyline, the readers finally learned why Mr. Sinister wanted the underground community slaughtered. By then the Morlocks had been retconned into having been created by the Dark Beast, who had crossed over from the Age of Apocalypse to this reality (616) twenty years in the past. Since in AoA Dark Beast learned genetics from AOA-Sinister, his work on the Morlocks was recognized by 616 Sinister as being based on his own studies. Sinister was annoyed by the unauthorized usage of his theories and so he had the Marauders kill the Morlocks. (revealed in Cable (1st series) #28)

Retcon :
The trial of Gambit in Uncanny X-Men #350 reveals that he worked for Sinister and originally gathered the Marauders, yet when he led them into the Morlock tunnels, Gambit did not know about their true intention. Once he realized that they were about to kill the Morlocks, he parted with them; at least he was able to rescue child Sarah (Marrow) from being killed by Sabretooth.
Fans have been lamenting about this retcon, as it apparently does not go along with the Marauders following and killing Tommy, yet this error can easily be rectified. Only half of the Marauders (Arclight, Riptide, Vertigo, Scrambler, Scalphunter and Harpoon) are seen following Tommy in Uncanny X-Men #210. The other members (Sabretooth, Prism and Blockbuster) are not seen before X-Factor #10. Maybe the Marauders split into two teams following different traces towards the Alley. Gambit led Sabretooth and the others there, while Scalphunter’s team followed Tommy.