The Fall of the Hammer

The big corporate Alchemax has built a floating city called Valhalla and transformed five people into simulacrums of the legendary Aesir from Norse mythology to re-install the population‘s belief in them and exploit it. However, the anti-grav generators malfunction and invoke atmospheric disturbances that will soon cause major ecological damage. Additionally, they can’t handle the city’s weight and Valhalla is about to crash down into New York. Various heroes get involved for various reasons, may that be their connections to Alchemax, their concern about the environment or having friends among the new breed of Aesir who apparently do not remember their prior existences. 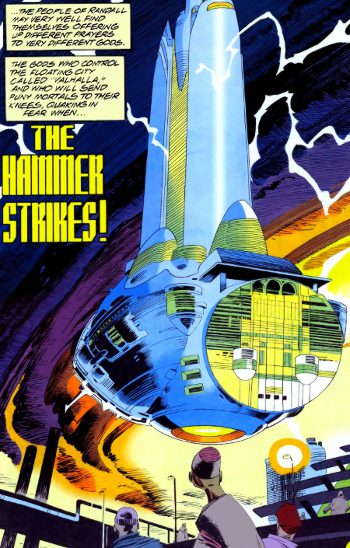 Miguel O’Hara (aka Spider-Man) and his girlfriend Dana are aboard Alchemax’s newest project, the artificial floating city Valhalla, when suddenly Thor and Heimdall appear and claim the city for themselves. They order all technicians and scientists to leave, but Thor is amazed by Dana’s beauty and wants her to stay at his side. Miguel causes a fight until Thor knocks him over the edge of the platform. Once out of sight, he uses a webline to attach himself to the downside of the platform. He deliberately provoked the fight to get the chance to change into his Spider-Man costume, yet by the time he returns, the staff, including Dana, have already left Valhalla in small shuttles. Thor picks a fight with the hero, who states that he doesn’t believe in the Norse gods. As punishment, Thor hurls his hammer at Spider-Man full force, and it propels him to New York, where he is crushed by it.

Searching for his friend Jordan Boone, Meanstreak of the X-Men has come to New York, accompanied by his teammates Krystalin, Timothy Fitzgerald and their ally Bloodhawk. They wonder at the many news-screens displaying images of the Aesir but have no time to waste. In Boone’s apartment they check his computer files and learn of the ecological problems Valhalla is causing, and also find evidence that points to Phillip Ravage of the Eco office. Before the four mutants can leave, they are attacked by Alchemax’s internal security. While the others are able to escape, Fitzgerald gets arrested. Bloodhawk, Krystalin and Meanstreak burst into the Eco Office, and demand the whereabouts of Jordan Boone from Phillip. He doesn’t like the tone of their threats and transforms into Ravage. A brief battle starts, but soon they realize that they are on the same side and neither one knows what happened to Boone. They decide that to get any answers they will have to go to the floating city Valhalla, where Ravage wants to meet with Doom to destroy the city from within, intending to stop the ecological problems it causes.

Spider-Man survives the impact of Thor’s hammer, but once he digs himself out of the crash-site, he stares into the gun of the Punisher. From what little they know of each other’s reputation they think that they are both against Alchemax’s machinations, so they decide to team up. The Punisher has organized a sky-bike and they head towards Valhalla too.

In the floating city, the X-Men and Ravage encounter Heimdall. In the confusion Ravage slips away, but gets attacked by Hela. During the fight with the self proclaimed Goddess of Death, Ravage realizes that she is his former friend Tiana. Ravage chooses to not fight back, and Hela finally snaps out of her programmed behavior when she can’t bring herself to kill him. Yet she is confused and instead of letting Ravage help her, flies away to be alone. Before he heads to the generator room to try and make the necessary repairs, Ravage informs the X-Men of his discovery that these Aesir are fake and not the actual Asgardians of Norse mythology.

Down in New York, Fitzgerald breaks out of custody and intends to meet his friends aboard Valhalla. In a park he finds followers of Norse mythology lining up to be taken to Valhalla on a small platform. He has no time to wait, so he scares them away with his mutant power and makes the operator take him up, yet along the way the travel platform’s engines break down because of bad weather (Thor’s rainstorms). 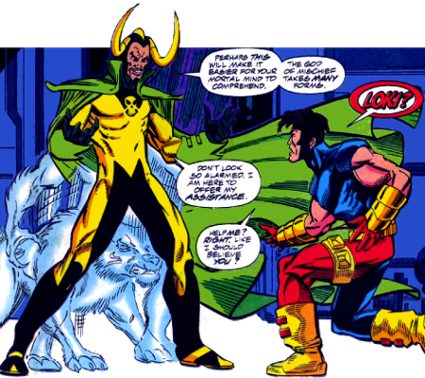 Meanwhile, Krystalin, Bloodhawk and Fitzgerald have troubles fighting Heimdall, who is fast enough to counteract Meanstreak’s attacks and also knocks out Bloodhawk. He would have spared Krystalin as she wears a Hammer necklace (which belonged to her mom), but when she states her disbelief in these false Aesir, he fights her as well. Unexpected help arrives with Loki, who turns out to be none other than Jordan Boone. He hands Meanstreak a device that defeats Heimdall and then explains that he deliberately infiltrated Alchemax’s Aesir program to receive power. Unlike the other subjects, he maintained his own personality by sabotaging the transformation technology. He also placed all the clues with Ravage, the X-Men and Doom so that the heroes would come and stop Alchemax’s plans. Right on cue, Doom arrives with Fitzgerald, whom he rescued from his fall on the way up.

Angry about his comrade Heimdall’s defeat, Thor attacks the assembled heroes. Loki informs Doom of Thor’s weakness – he draws his entire strength from the hammer. Doom uses the systems in his armor to interrupt the power flow between Thor and his weapon and finally the energy levels reach a critical limit. Both Thor and Doom go down in a big fireball and crash into New York. Alchemax operatives dig out the unconscious Thor and bring him to their base, followed by Doom, who is masquerading his presence. From Alchemax’s boss Avatarr, Thor learns the truth that he is really priest Cecil McAdam who was jealous of his god and jumped at the chance to become him. Avatarr renews Thor and sends him again to Valhalla.

Meanwhile the floating city’s gyroscopic stabilizers break down and Valhalla starts to spin out of control. The X-Men and the newly arrived Spider-Man and Punisher see to it that staff and scientists get evacuated. Amidst it all, Loki gloats at how his plan to pit Alchemax and heroes against each other turned out fine and he gained the superpower to shapeshift out of it. He transforms into a bird and flies away, leaving the heroes to deal with the crisis themselves. After the last staff members have been evacuated, the X-Men enter the last escape pod and leave as well. 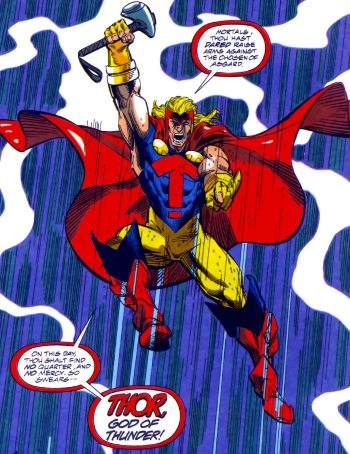 Down below, Doom learns that Avatarr is using the Aesir only as a distraction for his real plans and returns to the floating city, wanting to claim it for himself. Yet on arrival he finds the city empty, save for the Punisher, Spider-Man and Ravage, who state that all efforts to stabilize Valhalla were without success. The city will crash down. Before the four unlikely heroes can take any course of action Heimdall, Baldur and genetically engineered warriors called Berserkers attack them. The Punisher shoots the two Aesir and he and Spiderman keep the warriors busy to provide Doom and Ravage with enough time to stabilize the city with one of Doom’s devices. Yet Thor arrives and angrily smashes the generators, not wanting his home to fall into the enemy’s hands. The heroes realize that they need Thor’s hammer as a power-source to stop Valhalla’s demise a second time. The Punisher discovers that Thor is his reverend Cecil McAdam and by confusing him, manages to grab the hammer with some help from Spider-Man. The floating city gets repowered, and Doom claims it for himself and makes off with it. Alchemax’s leader Avatarr appears as a hologram and vows vengeance.