THROUGH THE LOOKING GLASS - JAMES JASPERS AND THE FURY: Page 4 of 4

Epilogue
‘It was a curious dream, dear, certainly: but now run in to your tea; it’s getting late.’
(Alice’s Adventures in Wonderland)
Aftermath 1
Reality was saved. As the three heroes learned at Merlyn’s funeral ceremony, most people would simply forget about the reality warp, as reality would slowly repair itself. However, scars to reality remained, shown for example in the fact that some of Jaspers creatures, like the Crazy Gang, remained or that strangely mutated children, called the Warpies, started to be born. The removal of Captain UK to another reality and the later dissolving of the Otherworld energy matrix were both factors in returning the Warpies to normal. [The Mighty World of Marvel #13, Captain Britain (2nd series) #14, Excalibur (1st series) #65] Merlyn, of course, being the ultimate schemer, had merely faked his death, in preparation for another high-stake game. [Excalibur (1st series) #43-50]
Aftermath 2 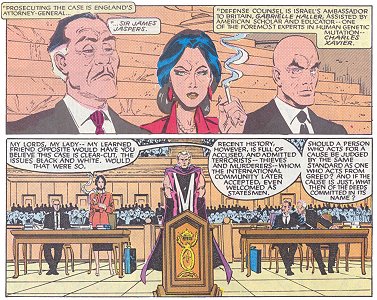 Some time after the Jaspers Warp storyline, a Sir James Jaspers was present as prosecutor at the Trial of Magneto. An unhealthy attitude towards heroes shone through as well. Originally, this was intended to be the start of a Jaspers story in the pages of the X-books that was nixed, when Captain Britain writer Alan Moore had a falling out with Marvel (the copyright laws in Britain being different than the ones in the UK).

As this intended storyline was never realized, perhaps (with something of a stretch of imagination) one could consider that the Jaspers appearance at the Magneto trials happened before or in the early stages of the Jaspers Warp (time also got twisted there after all) or was an echo of them. [Uncanny X-Men #200 and X-Men vs the Avengers #4]
Aftermath 3
When the Fury first came to Earth 616, it attacked two homeless people. One of them, Mrs McCleary, it killed instantly and used as sustenance. Such good fortune could never be Sid’s. Having lived a horrible life from an abusive childhood onwards, things now got even worse. Infected with the Fury’s virus, his body started to break down and twist, becoming a poor approximaton of the Fury. Delusional, Sid was looking for help, 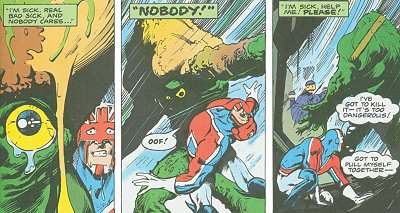 accidentally killing people in the process. Captain Britain stumbled onto him and, seeing only a creature that smelled like and kind of looked like the Fury, he battled Sid with all his strength. Only during Sid’s dying moments did Captain Britain telepathically “hear” Sid’s screams and became aware that there was a human being in there. [Captain Britain (2nd series) #4]

Apart from Sid, no active trace of the Fury should have remained. However, ongoings in the X-Men’s lives are about to prove this assumption wrong. [Uncanny X-Men #445]