THROUGH THE LOOKING GLASS - JAMES JASPERS AND THE FURY

Chapter 1 – A crooked World
“But I don’t want to go among mad-people,” Alice remarked.
“Oh, you can’t help that,” said the Cat. “We’re all mad here.”
(Alice’s Adventures in Wonderland)

It was the start of a descent into madness for Captain Britain, when along with his elfin sidekick, Jackdaw, he was sent by his mentor, Merlyn, to a parallel universe (Earth 238), a sad, desperate world, where death and insanity lay in the air, all courtesy of the seemingly unassuming gimmick villain, James ‘Mad Jim’ Jaspers. 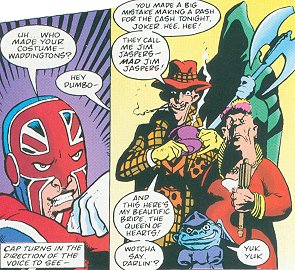 Captain Britain and Jackdaw first ran afoul of Jaspers and his Crazy Gang, a motley crew of creatures styled after Lewis Carroll characters, the moment they set foot on that world, as they materialized in a bank that was in the process of being robbed by the Crazy Gang. Brian and Jackdaw foiled the robbery, letting Jaspers and his group escape, at the time having no idea of their foe’s true nature.

They soon learned that this world was a sad place without any heroes. Hunted by the authorities and battling one odd foe after the other, Captain Britain eventually teamed up with the beautiful and enigmatic Saturnyne, sent by the Dimensional Development Court to give this sad world an evolutionary Push, intended to ring in a new age of rationality. The Push succeeded – however, a moment later, the laws of reality collapsed, as James Jaspers, who desired anything but an age of rationality, revealed his true nature. 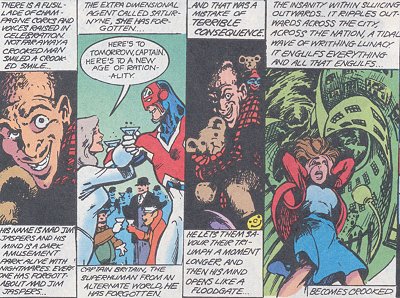 Jaspers was a mutant with immense reality-warping powers but he hadn’t always been like the man Captain Britain first met. Ten years earlier, he was a shrewd politician, who led a campaign against superheroes (to crack down on the competition). Being a mad genius as well, he had given the country the means of wiping the heroes out … [Marvel Superheroes #377-387]
Chapter 2 – The Fury
“I’ll be judge, I’ll be jury,” said cunning old Fury: ”I’ll try the whole cause, and condemn you to death!”
(Alice’s Adventures in Wonderland) 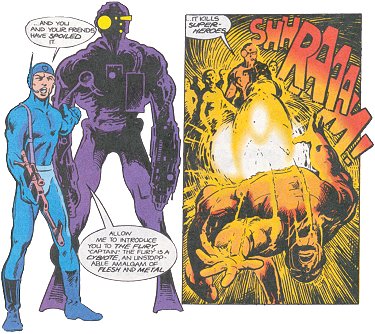 The Fury was born. A mute, grotesquely shaped, black oozing creature, a cybiote, part machine, part organic. It could fire extremely powerful energy blasts. It had vastly superhuman strength, durability and reflexes. If any part of it remained intact, it could rebuild itself completely from surrounding materials. With the logic of a computer, the intuition of a dog and an ability to adapt that would put the finest Sentinel to shame.

It was obviously named with Jaspers’ penchant for Carroll characters in mind. At the same time, the name also seems to hail back to the Roman name for the Erynnes, the Greek vengeance demons who were relentless in hunting their prey down. 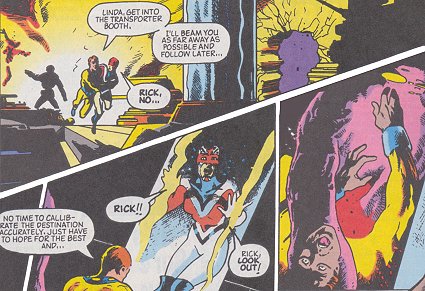 Like its namesake, this Fury never gave up. Whatever you threw at it, it would eventually find a way to kill you. Within two years, it had killed all of its world’s heroes – all but one. This world’s version of Captain Britain, a young woman codenamed Captain UK, had escaped and was teleported to another universe, the main Marvel universe, her last sight of home being the Fury murdering her husband. With the heroes dead, the Fury was decommissioned and Jaspers eventually embarked on his career of petty crime, as their world slid into despair for the next ten years, until Captain Britain’s arrival and the events that followed. 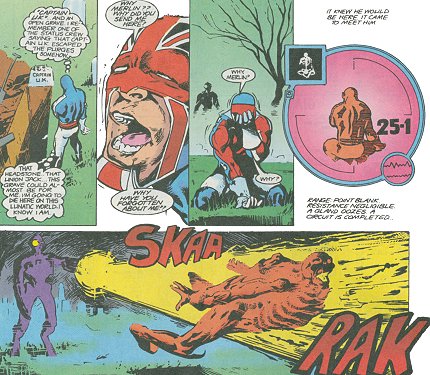 With the sudden reality warp, the government blamed Captain Britain and unleashed the Fury once more. It soon proved that the Captain was no match for it, as it killed first Jackdaw and, eventually, after he fled from Jaspers’ madness – over Captain UK’s open grave – Captain Britain himself was killed. [Marvel Superheroes #387-388, The Daredevils #7]