THROUGH THE LOOKING GLASS - JAMES JASPERS AND THE FURY: Page 3 of 4

Chapter 5 – Anarchy in the UK 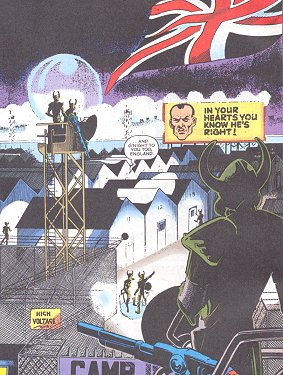 Tweedledee retorted contemptuously: “You’d be nowhere. Why, you are only a sort of thing in his dream!”
“If that there King was to wake,” added Tweedledum,” you’d go out – bang – just like a candle!”
(Through the Looking-Glass)

This proved rather impossible as reality– past and future, cause and effect – already started to warp. Living in hiding, the heroes no longer knew how long this had been the case - days, weeks, months? Somehow, Jaspers had been elected prime minister, erected a dictatorship and had all potential superhumans shipped into concentration camps. 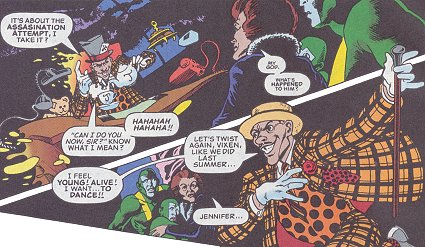 When the Vixen and her goons tried to confront Jaspers about this, feeling he had gone too far, he dropped all pretense of being human, changed her guards into strange creatures and the Vixen herself into a real fox, like her namesake.

Reality around Jaspers wasn’t just being warped anymore, it was breaking down, as impossible things started to happen and nightmares came to life. At the same time, Captain Britain left his friends, intent on doing something about Jaspers, no matter how futile that attempt might be. Shortly afterwards, all of his friends, with the exception of Saturnyne and Captain UK, were captured or killed.

Somewhat earlier, back at Braddock Manor, some of Jaspers’ soldiers – the Beetles – had been sent to the manor, looking for superhumans. Instead, they found the Fury. Having absorbed part of the sophisticated computer system under Braddock Manor, it had grown and become even more dangerous. Once more, it set out in search of its quarry. [The Mighty World of Marvel #7-10]
Chapter 6 – Endgame
“It’s a great huge game of chess that’s being played – all over the world – if this is the world at all, you know.” 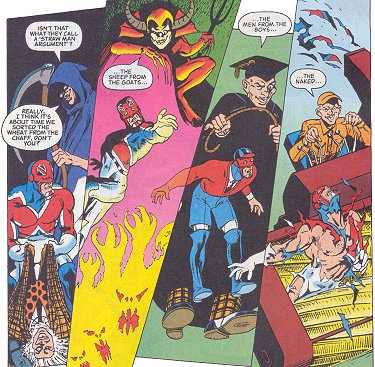 Captain Britain confronted the mad god and found himself badly outmatched, his foe making him live through crazy illusionary scenarios. Even when he landed a blow, it was for nothing, as Jaspers simply reconstituted himself in another shape behind him. Torturing the Captain and leaving him for dead, Jaspers left to find some new fun. Bored, he created himself company – a new version of the Crazy Gang. 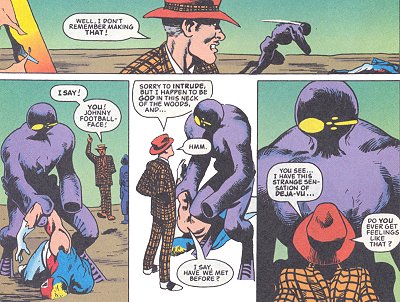 In the meantime, the Fury had found the badly injured Captain Britain and intended to finish him off. One of its blows catapulted him past Jaspers and his new friends. The Fury and Jaspers finally met. 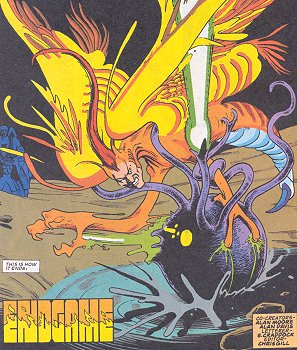 Jaspers was mildly intrigued by this new creature. The Fury, on the other hand, suddenly forgot about Captain Britain. In its own universe, it had been created to kill all superhumans but was forbidden from killing one them, its creator - Jaspers. This had always bothered it. Reasoning that this was after all another Jaspers, it now attacked him – ultimate weapon against a mad god - both of them reconfiguring themselves in all kinds of manners to kill each other.

Meanwhile on Otherworld, at the height of the conflict, Merlyn seemingly died, as a result of the game having spun totally out of control. Back on Earth 616, a frightened Saturnyne and Captain UK watched the mad display before them. 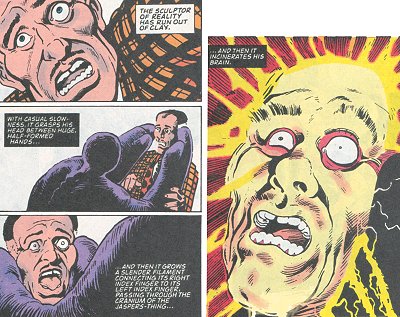 Having analyzed its foe, the Fury finally found a solution: Jaspers needed matter to reconfigure, but the Fury knew a place where no matter existed, the non-space it had passed through between dimensions. It transported the two of them there. With Jaspers powerless, the Fury grew a wire through Jaspers brain and electrocuted him. 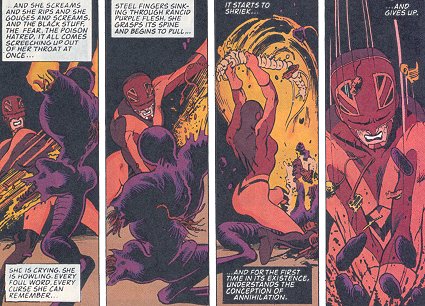 Badly damaged, it returned to Earth, intent on mending itself. Despite his injuries, Captain Britain made a heroic effort to confront it once more, managing at least to cause further damage. However, the Fury slowly gained the upper hand. Luckily, Captain UK could finally overcome her trauma. She attacked the Fury and literally tore it apart. Finally grasping the concept of annihilation, the impossible happened – the Fury gave up. [The Mighty World of Marvel #11-12]